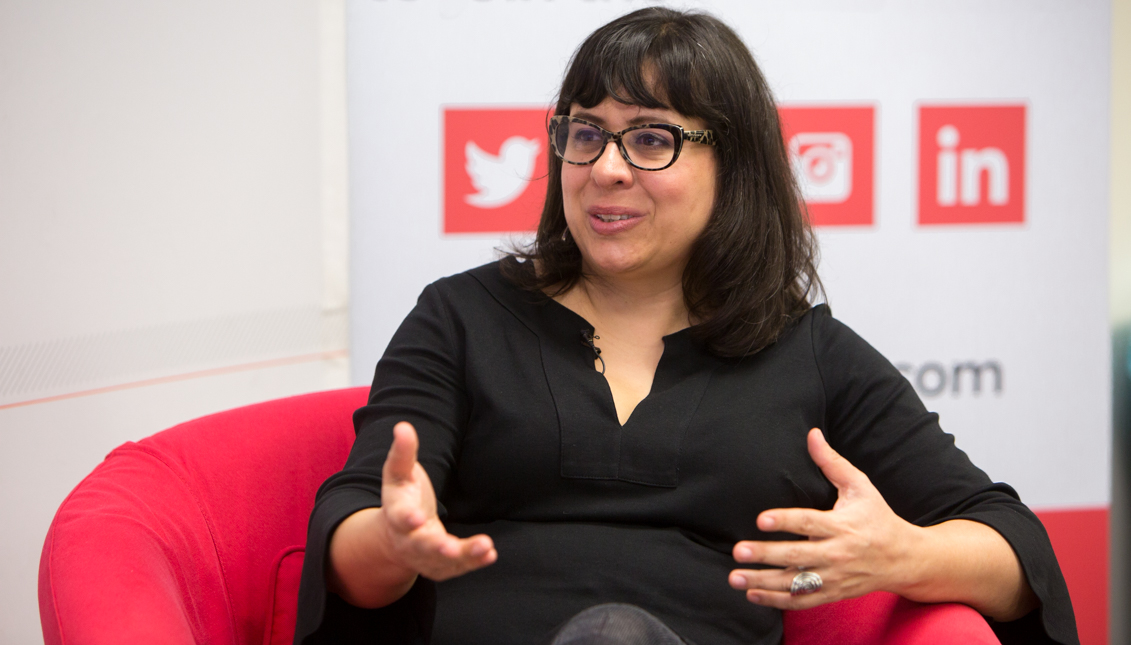 Journalist and author Eileen Truax visited the AL DÍA newsroom on Wednesday to talk about DACA, immigration, her book about DREAMers, and more.

“It’s interesting that suddenly you see the topic everywhere, everyone is talking about Dreamers, now they know who dreamers are,” said journalist Eileen Truax in her visit to the AL DÍA newsroom on Wednesday for an AL DÍA Live conversation.

Throughout the conversation, Truax talked about her 2013 book, Dreamers: An Immigrant Generation’s Fight for Their American Dream, and shared her thoughts on the current political situation faced by DACA recipients and other undocumented individuals throughout the country.

Truax explained that she began writing her book about Dreamers in 2010 — well before the Obama Administration announced the creation of the DACA program in June 2012.

“It’s been a long time where Dreamers have been fighting to be acknowledged, to share their stories and to share their situation, both with people in politics, the Congress members, the White House, but also the public in general. Because I think immigration is a subject that tends to be spoken like ‘problem,’ ‘trouble,’ ‘people coming’. We talk a lot about the transit of immigrants, the moment when they arrive... But after that, we don’t think much about what happens with them and their children,” she said.

Truax was working as a political reporter in her hometown of Mexico City when in 2004 she decided to move to Los Angeles to work for La Opinión, the highest-circulating Spanish-language publication in the U.S. That is when she first started hearing about the people who would come to be known as the Dreamers.

“By covering immigrant stories, I realized that we had this other story that at that point was not breaking news, but it was a story that was worth it to tell. Because the fight that these kids were having to deal with every day, just to make little things, like going to school, getting a job, driving a car, at that age were like little Everests for them. And every day they were conquering them and no one was paying attention to that. The effort that a teenager has to make to get a job without a social security number, to earn some money, to pay for tuition. In that moment they didn’t have any access to tuition help. So they were in a very hard battle, and I noticed that we were not paying attention to that,” said Truax.

After hearing the particularly tragic story of one young undocumented individual who had grown up in Texas, Truax decided to dedicate herself to writing a book that would shed light on the lived realities of many undocumented Americans, and upend misconceptions that pervaded (and continue to pervade) the national discourse.

Showing people's lives as they were affected by immigration policy was key, said Truax:

At 10-year mark of DACA, advocates and officials celebrate, but also demand action
June 15th, 2022
Dreamer graduates cut off from work permits as DACA sits under a pile of legal actions
May 31st, 2022
Senator Alex Padilla chairs judiciary panel on the challenges of immigration
March 16th, 2022

“Some people tell me you need to give more hard information about the legislation, about the politic environment, how the negotiations in congress are, and I thought well, if you google that you will find it. But if you google what a mother thinks of her children going to civil disobedience [acts] and risking deportation, you will not find that. So it’s not that I think this is more important, it’s just that I thought that this was the piece of information that was missing in the debate, in the whole discussion…

We were not talking about actual people, actual families, their lives, how they are affected, and also we were not talking about where they live and how they live. Because I found in these years that some people in the U.S. think about ‘them.’ The immigrants, them, the Dreamers. ‘They’ are being affected. And they do not realize that that’s us, they are part of our communities...they are parts of our communities.”

Stay tuned for more insights from Truax’s interview, to be published next week.