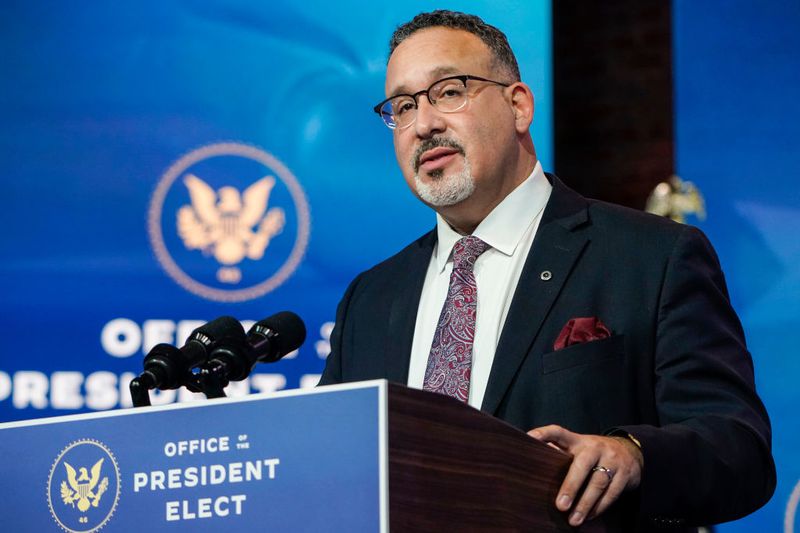 Sec. Miguel Cardona announces major debt relief on its way to those in public service

He says that $715 million in student loan forgiveness has already been approved and $1.2 billion on the way.

On Thursday, Nov. 11, Education Secretary Miguel Cardona wrote on Twitter that recent reforms to a federal program intended to provide student-debt relief to public servants, like teachers and nonprofits workers, were a success.

He said thousands of borrowers are on track to receive, or have already received student debt relief.

Good news! Over the coming weeks, more borrowers – including veterans & service members – will get emails about #PSLF debt cancellation.

Last month, the Education Department announced a series of reforms to the Public Service Loan Forgiveness (PSLF) program, which was built to give relief after 10 years of qualifying payments, but has instead acquired a 98% denial rate.

“Borrowers who devote a decade of their lives to public service should be able to rely on the promise of Public Service Loan Forgiveness,” Cardona said in an October press release.

“The system has not delivered on that promise to date, but that is about to change for many borrowers,” he continued.

The Biden administration is in the process of cancelling $2 billion in student loans for 30,000 borrowers.

“Check your inboxes,” Cardona wrote in his tweet, adding that $715 million in student loan forgiveness has already been finalized, with another $1.2 billion to come.

ICYMI: In our first wave of #PSLF changes – borrowers got $715M in relief. And there is more to come! https://t.co/qAOfojApO0

“Over the coming weeks, more borrowers – including veterans & service members – will get emails,” he said.

The PSLF program requires 120 qualifying payments for a borrower to reach loan forgiveness. Due to a fatal combination of confusing eligibility criteria established by Congress, poor facilitation by loan service providers and a lack of supervision by the Department of Education, many borrowers who thought they were on track for PSLF discovered that they weren’t actually following the program’s rules.

This results in very low approval rates for the program. Under the new changes announced last month, which the administration is calling the “Limited PSLF Waiver” program, the Department is briefly relaxing the rules governing PSLF to allow most types of federal student loans and most types of repayment plans, to qualify

The 30,000 student loan borrowers that Secretary Cardona was talking about in his tweet apply to those who have already certified their public service employment, but have had prior payments rejected for different reasons, such as timeliness, or because earlier payments were made under a non-qualifying repayment plan.

Under the limited waiver, the department's website states that "any prior payment made will count as a qualifying payment, regardless of loan type, repayment plan, or whether the payment was made in full or on time."

The waiver alone would bring 550,000 student-loan borrowers closer to relief automatically, the department said. Other updates include permitting months spent on active duty for service members to count towards payments, along with plans to review all denied PSLF applications to recognize and fix errors.

‘I owe more than I ever borrowed’ — Student loan forgiveness for public service workers is getting a reboot. Here’s what you need to know pic.twitter.com/CcWwsVvjHr

Borrowers who believe there was a mistake in processing their applications can also receive another review in 2022.

Richard Cordray, a spokesperson for the Pennsylvania Higher Education Agency, which manages PSLF, told Insider that changes like this are hard to process and execute.

“But we will get the changes made, and I pledge that to you today. We ask for your patience as we move forward,” Cordray said.

The Department hasn’t offered an official estimate on how many borrowers will become eligible for relief after the first wave of approvals, or how much student loan debt will be forgiven as a result. But it suggested in previous statements that an extra $2.82 billion, on top of the initial $2 billion, could be on the way.

“There is more to come!” Cardona tweeted on Sunday, Nov. 14.