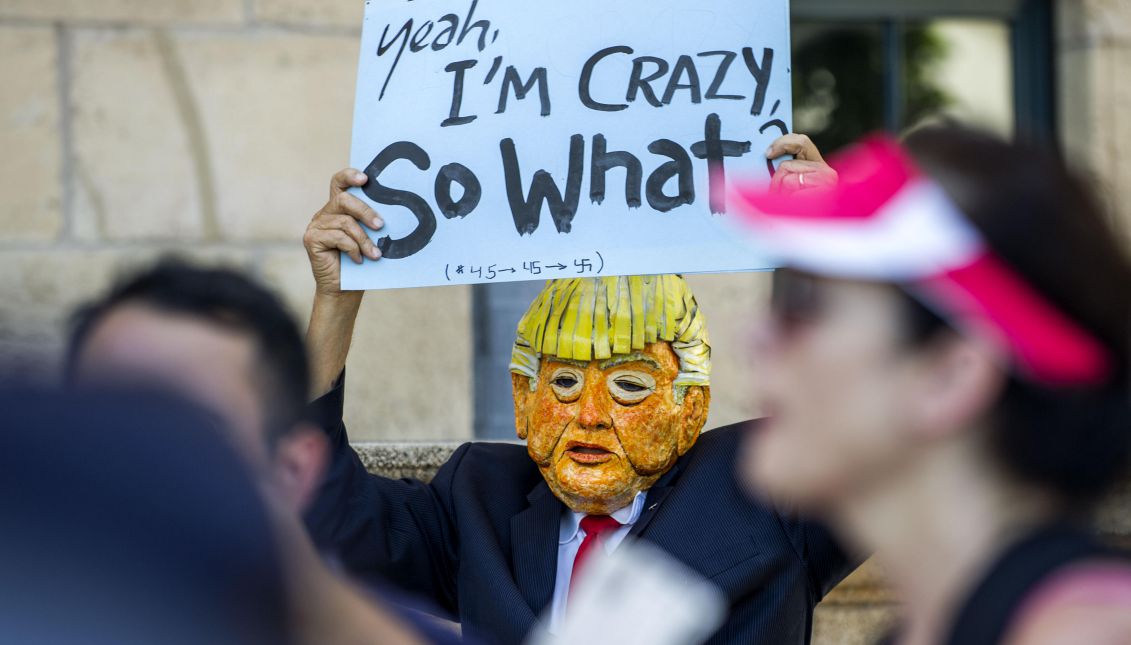 A group of people protest against the immigration policies of President Donald Trump during the visit of Attorney General Jeff Sessions to Miami on Aug. 16, 2017. Sessions urged the local authorities to follow the example set by Miami-Dade County of …

Sessions calls for punishing, not protecting, criminals in sanctuary cities

In Miami, Sessions lambasted so-called "sanctuary cities" - municipalities and other local entities that refuse to cooperate with voluntary immigration…

US Attorney General Jeff Sessions on Wednesday urged local authorities around the country to follow the example of Miami-Dade County and "punish, not protect" criminals during a speech in Miami in which he broadly criticized Chicago authorities.

Before an audience of about 150 people, including dozens of local police, Sessions lambasted so-called "sanctuary cities" - municipalities and other local entities that refuse to cooperate with voluntary immigration programs and including Chicago and San Francisco - and he blamed them for crimes committed by undocumented immigrants.

The remarks by the AG, who spoke from a podium set up at the Port of Miami accompanied by Miami-Dade Mayor Carlos Gimenez, followed those delivered by Immigrations and Customs Enforcement acting director Thomas Hofman.

Nearby, about 50 pro-immigrant groups had protested near the maritime terminal shortly before Sessions spoke.

After thanking Miami-Dade County and its mayor for their cooperation with national immigration authorities, Sessions lamented the fact that Chicago earlier this year sued the Department of Justice for cutting federal funds to sanctuary cities.

During his address, the Republican AG said that Chicago preferred to take a "political" position instead of guaranteeing the "safety" of citizens there.

Sessions rejected the fact that in early August Chicago's Democratic mayor, Rahm Emanuel, filed suit against his department for withholding $3.2 million earmarked to equip that city's police department, a move that had come in accord with President Donald Trump's threat to reduce federal funds to sanctuary cities, and he reiterated that the US government will not provide resources to local authorities that do not provide security for their citizens.

Sanctuary is legal, per judge who shoots down Florida’s ban on policies
September 22nd, 2021
ICE ‘Sanctuary Op’ set to raid cities weeks before 2020 election
October 2nd, 2020
The Undocumented America: "I don't want to perpetuate the message of pain"
May 22nd, 2020

"I'm here to announce that Miami-Dade is now in compliance, full compliance, and eligible for federal law enforcement grant dollars," Sessions went on to say.

"This is good news for law enforcement and for the citizens of Miami-Dade. It means more money for crime fighting. It means we are partners, partners together, in keeping everyone safe," he added.

Sessions also said that during the July 4 celebrations in Chicago there were about 100 shootings and 15 murders, while in Miami there were "zero."

Gimenez, meanwhile, did not speak at the event but said through his spokesman, Mike Hernandez, that a few hours earlier he had privately explained to Sessions the county's policies to reduce crime and his support for immigration reform.

The Miami-Dade County mayor has received criticism for his full cooperation with the Trump administration's anti-immigration policies and has been chastised for turning his back on the large immigrant community in the South Florida county, where 60 percent of the population was born abroad.