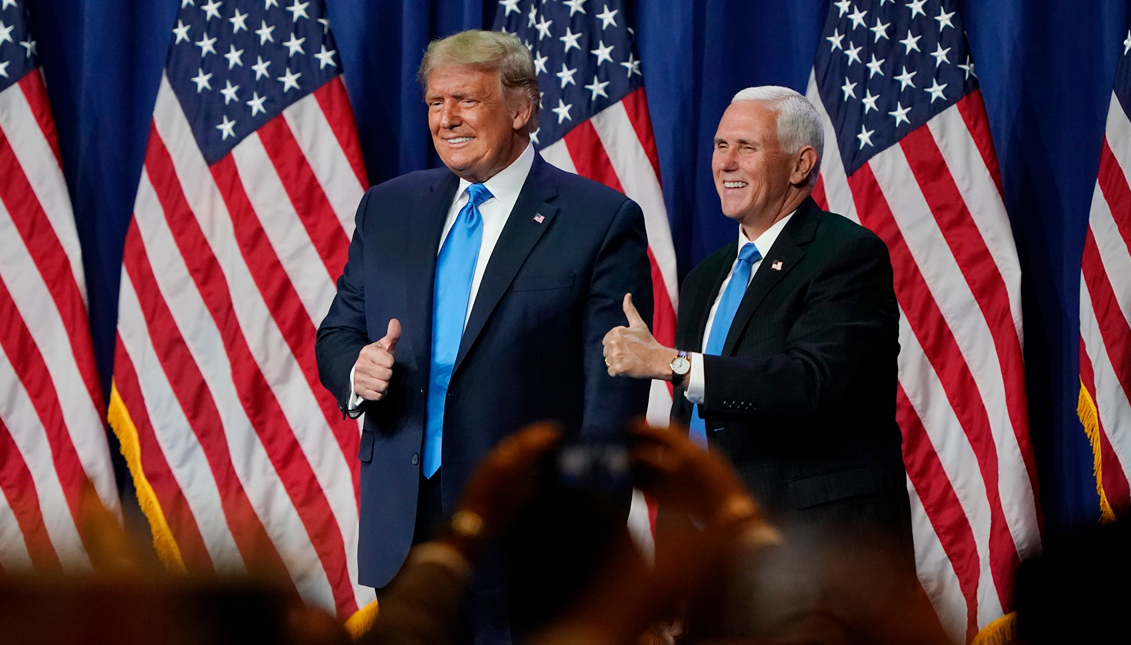 CHARLOTTE, NORTH CAROLINA - AUGUST 24: President Donald Trump and Vice President Mike Pence give a thumbs up after speaking on the first day of the Republican National Convention at the Charlotte Convention Center on August 24, 2020 in Charlotte, North…

A Recap of the first night of the Republican National Convention

A week after the DNC, Republicans hope to generate more enthusiasm for Donald Trump’s reelection campaign with their own virtual convention.

After fighting for months to have an in-person convention, the GOP was forced to do as the Democrats did and have a virtual one.

The entire event was supposed to be held in Charlotte, NC with speakers, delegates and audiences in the same auditorium, but the government's handling of COVID-19 pandemic made it a risk for massive spreading.

The U.S. currently has over 5.7 million cases of the virus, more than any other country. Nearly 300,000 deaths are predicted by the end of the year.

North Carolina Governor Roy Cooper would not allow the Republican National Convention to operate in the state as it was originally intended.

A move to Jacksonville, Fla. was planned but with cases spiking across the country most speakers would be delivering their speeches in an empty Andrew W. Mellon Auditorium in Washington D.C. or from their homes.

Delegates still gathered to cast their votes in Charlotte and President Donald Trump met with them hours before the virtual convention was set to start on Monday.

The first speaker of the night was Charlie Kirk, the founder and head of Turning Point USA, a large conservative student organization.

He tried to speak to the “angst of young people” although Democratic nominee Joe Biden has a 52-point lead on the incumbent with college students.

He then called the President the “bodyguard of western civilization,” but did mention that Trump has isolated the country by pulling out of the Paris Climate Accord months into his presidency and terminated funding for the World Health Organization in May.

Congressman Jim Jordan of Ohio spoke from his home and started by labeling Democrats’ response to the pandemic and the outcry for criminal justice reform as “crazy ideas” before sharing a personal story.

He talked about his nephew who died in a car accident two years ago and how president Trump took the time to speak with the boy’s father and console him.

Much of his speech stemmed from his belief that Democrats and former vice president Biden feel like they are owed the Black vote.

He was most likely referencing an interview the Democratic nominee gave in May on “The Breakfast Club.”

“If you have a problem figuring out whether you’re for me or Trump, then you ain’t Black,” Biden said.

A Pew Research study released last week found that only 8% of registered Black voters would vote for the incumbent compared to 89% for Biden.

Jones was followed by Andrew Pollack, a school safety activist who lost his daughter in the 2018 mass high shooting in Parkland, Fla.

He recounted his personal meeting with Trump in the Oval Office after the tragedy and felt that the media turned his daughter’s death “into a coordinated attack” on the president instead of focusing on solutions to improve security in schools.

Near the end of his speech, he blamed an Obama-era guidance from 2014 issued by then Secretary of Education Arne Duncan, “Guiding Principles: A Resource for Improving School Climate and Discipline,” for the prevalence of school shootings across the country.

The guidance mainly wanted schools to lessen their reliance on suspensions, expulsions and law enforcement as tactics to improve a student’s discipline.

Unfortunately, Pollack did not realize that his daughter’s county school board had implemented similar policies in 2013.

Trump did revoke the Obama-era discipline policies the year of the Parkland shooting but that came after advocating for teachers to be armed with guns to increase school safety.

The McCloskey couple also talked about violence in their segment at the RNC, but in this case, they were the ones with the firearms.

On June 28, protesters in St. Louis, MO who were outraged by the brutal murder of George Floyd earlier that month marched towards the house of mayor Lyda Krewson.

On the way, they trespassed onto the property of the McCloskeys in an act of civil disobedience, but the couple came out of their house with firearms pointed at the protesters and confronted them for several minutes.

This was enough for them to get a speaking spot at the RNC and their presence shows the GOP is more concerned with hearing voices of people in gated communities rather than Black Americans facing a disproportionate amount of police brutality.

“They’re not satisfied with spreading the chaos and violence into our communities, they want to abolish the suburbs all together by ending single family home zoning. This forced rezoning would bring crime, lawlessness and low quality apartments into now thriving suburban neighborhoods,” said Patricia McCloskey.

Mark McCloskey also called one of the activists leading the protest in St. Louis, Cori Bush, a “Marxist” and said her victory in the Democratic primary for Missouri’s first congressional district signals a takeover of the radical left.

Trump advisor Kimberly Guilfoyle delivered one of the highlights of the night as she shouted most of her speech into an empty auditorium.

She also claimed that she was a “first generation American” even though her mother, who she called an immigrant, was born in Puerto Rico, a U.S. territory where those born there are given citizenship.

Trump’s former U.S. ambassador to the United Nations Nikki Haley made the case for the incumbent by touting his foreign record saying he has “earned” a second term.

The former South Carolina governor then said that “America is not a racist country” before mentioning that immigrant parents faced discrimination while she was growing up.

When she talked about removing the Confederate Flag from the South Carolina state capitol following a white supremacist shooting in a church in Charleston, she referred to it as a “divisive symbol” instead of explicitly naming it.

This was probably because the president’s base is in support of the symbol still standing in state capitals across the south.

Donald Trump Jr was the penultimate speaker and told voters that his father values free speech, but then condemned protesters who were calling defunding law enforcement following the murder of George Floyd.

“When we dial 911 we don’t want it going to voicemail so defunding the police is not an option,” he said.

Senator Tim Scott of South Carolina closed out the night by thanking the president for believing in school choice and criticizing the use of “cancel culture” when talking about the history of race in America.

“We don’t give in to cancel culture or the radical and factually baseless belief that things are worse today than in the 1860s or 1960s. We have work to do but I  believe in the goodness of America. The promise that all men and all women are created equal,” he said.