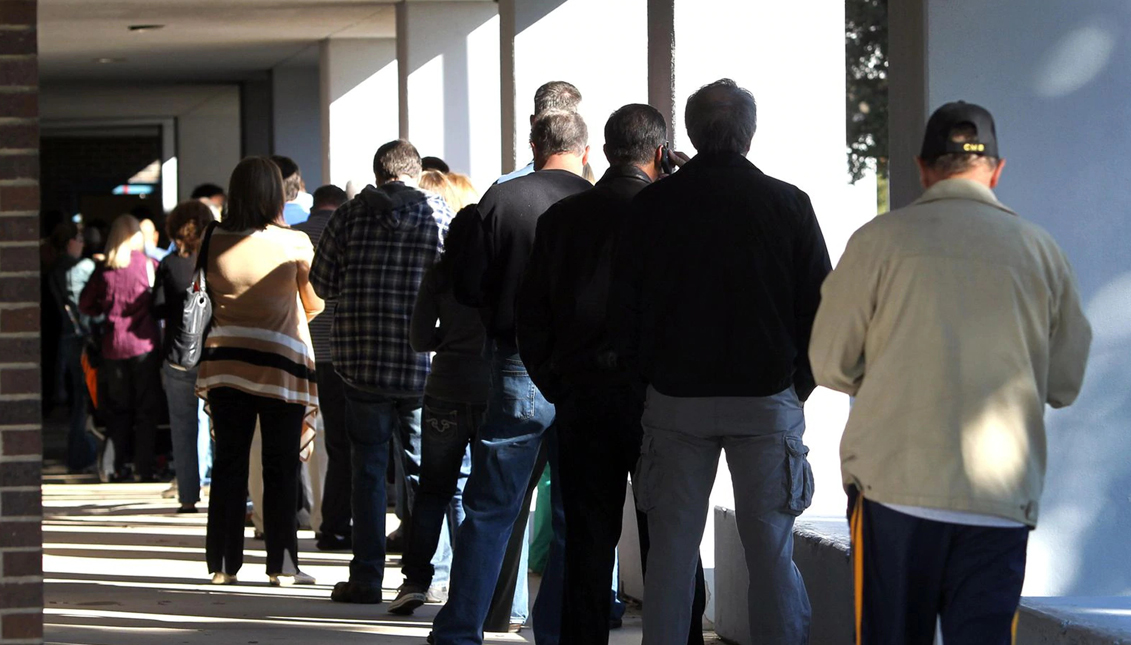 Voters must endure long lines at the polls, but in just days they have made history. Photo: DallasNews

Across the nation, in Texas, Georgia, and California, early votes are shattering 2016’s records.

Counties across Texas broke their own records for early voter turnout in the first day of the state’s early voting, despite the GOP’s best efforts to suppress the vote.

An order went into effect on Oct. 2, declaring each of the state’s counties can only provide one mail-in drop-off location for the November election, regardless of size or population.

For instance, Harris County in Houston, a 1,777 square mile jurisdiction, had to close 11 out of its 12 locations.

Governor Greg Abbott’s decision saw backlash, but a federal appeals court ruled late Monday that Texas can block county election officials from offering more than one place to drop off their mail-in ballots.

That’s even in Harris County, where drive-thru and curbside voting programs have been allowed to continue. However, legal battles are ongoing.

“How does a county of 5M people record more votes today than a state of 10M? People who refuse to be silenced with voter suppression, dedicated poll workers, and a $30M+ investment in voter safety and convenience,” wrote Harris County Judge Lina Hidalgo.

On Monday, Harris County broke records for the first day of early voting with hours to spare before the polls closed. It’s a sign that despite their Governor’s best efforts, many will wait in the long lines if that’s what it takes.

But long lines shouldn’t be normalized, because it’s voter suppression at play. Hidalgo issued a later statement, emphasizing that the record turnout is in part, due to millions of investments to increase voting access.

“Doubling our previous turnout record wasn't an accident, it was access that is allowing us to harness the community's dedication to democracy. This was the result of our 30M investment in more: polling locations, hours of operation and staff.

“Get out and vote. We’ve still got 17 days of early vote to go,” Hidalgo continued.

How does a county of 5M people record more votes today than a state of 10M? People who refuse to be silenced with voter suppression, dedicated poll workers, and a $30M+ investment in voter safety and convenience. Get out and vote. We’ve still got 17 days of early vote to go. https://t.co/2tIRAQWySf

There’s a similar story happening now in California, and Georgia, too, as voters set records on the first day of early voting.

With election day just over two weeks away, over 1 million California ballots are already cast, a figure that blows 2016’s first-day records out of the water.

“A massive increase compared to ~150,000 ballots returned at this same point for 2016 general election,” wrote Amanda Golden, a reporter for NBC.

California Secretary of State @AlexPadilla4CA says in a release that as of this morning over 1.5 million vote-by-mail ballots have already been returned by California voters.

A massive increase compared to ~150,000 ballots returned at this same point for 2016 general election

It’s too idealistic to say the record turnouts across the nation are solely attributed to fighting against voter suppression when there is a multitude of reasons why.

Perhaps voters are more enthused to vote the President out this year, having the hindsight of the mounting atrocities of this year alone. In the end, it could just be that the masses have prepared to vote early because of the pandemic, and the tallies will be similar to 2016.

In any case, two weeks away from the general election, these numbers are historic.