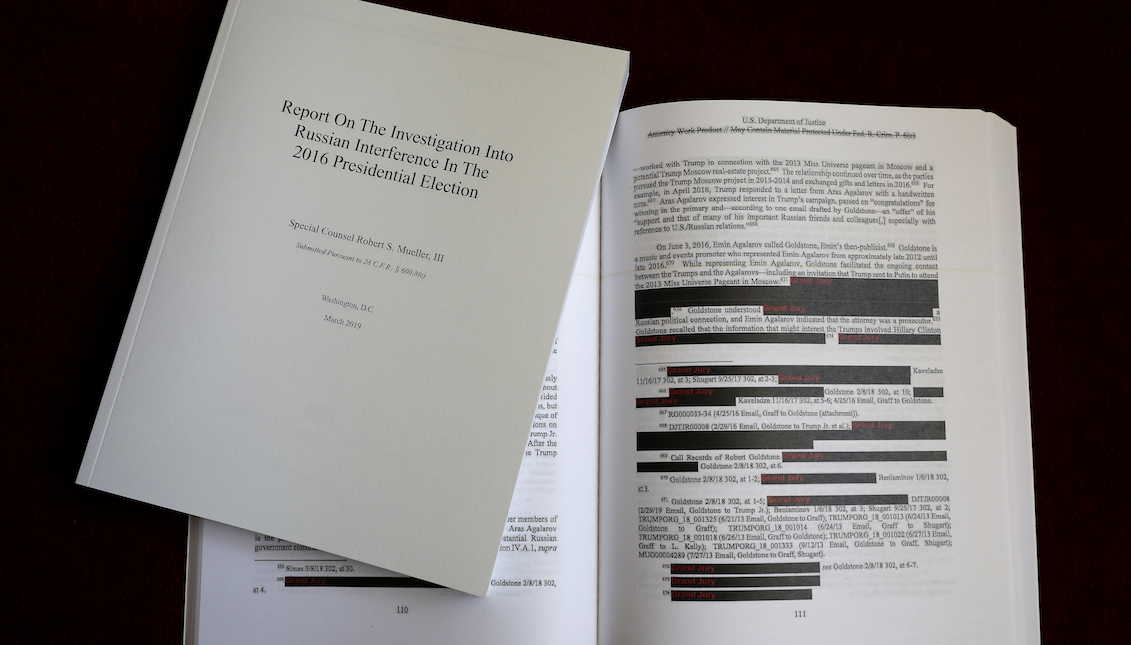 You can now get a copy of the research by the Special Counsel, a redacted manuscript that will surely become a bestseller.

The famous Mueller report details the investigation into Russia's interference in the 2016 presidential election where Donald Trump was victorious. The 448-page document was drafted by the Department of Justice and is the product of the investigation of special counsel Robert Mueller in the last two years.

We already know all this, but why is the report being sold in Barnes and Noble if, by federal law, it should be a document in the public domain?

Free reports of Congress’ Special Councils and Select Committees are a genre of their own, a bestseller no one looks up in the Internet.

Americans may remember the Starr report - the investigation of the Bill Clinton and Mónica Lewinsky case in 1998 - a much more juicy document, similar to 50 Shades of Gray, that became number one in Amazon sales.

This year it’s the Mueller Report’s turn: a lengthy document that, according to the NYTimes, is a thick slab of verbiage with minimal political impact.

Not only has the document been redacted by the famous Barr filter, but it seems designed to avoid any harm towards the U.S. president, and make publishers monopolies more productive through its online sales, profiting of the lack of attention within the noise and the avalanche of misinformation on social media.

Are we becoming weak zombies activated at the first sales stimulus or is it a smokescreen to sell a case of democratic significance as a product on the web?

The entire marketing maneuver becomes a "fun" echo in the possible corruption that Robert Mueller set out to investigate.

There isn’t a single case without an echo in recent years: Trump's former national security advisor, Michael Flynn, pleaded guilty to lying to federal agents. His former campaign manager, Paul Manafort, was another of the Administration’s big bosses who pleaded guilty to conspiracy and obstruction of justice.

Are we surprised that all the events within the Trump Administration have quickly become a product based on a punishable act?

“Make Orwell Great Again” is already a baseball cap, while 1984 became a bestseller in 2018 just after Kellyanne Conway, Trump's counselor, said in an interview: "You don’t have to be so dramatic, Mr. Spicer gives alternative facts."

That turn in the phrase ignited many alarms by drawing similarities with the dystopian world proposed by George Orwell in his novel.

The Internet monopolies vs. the federal laws, added to one of the most business-savvy presidents in recent history, makes up that business logic that allows Barnes & Noble to sell via Kindle a report that has been financed by the American taxpayers.

It represents the profitability of a tax that will later be repaid by who purchases the book, whether it is online or on paper.

If we are still zombies in the face of the genius of the internet and its free products, the free downloads of electronic books run the same risk as to the Mueller report in Barnes and Noble: becoming another source of benefits or, even worse, making the political show a profitable business.