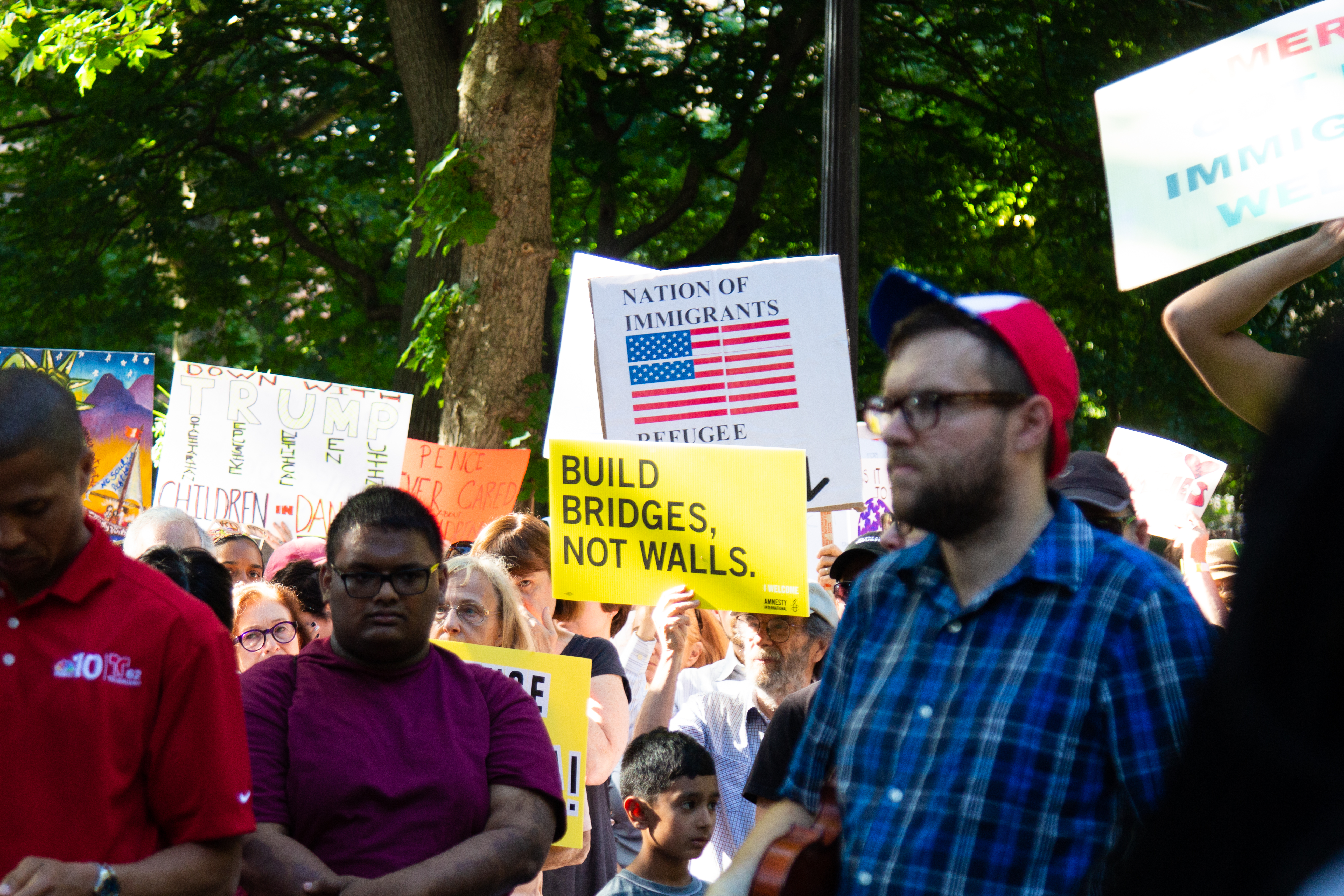 Protesters at the June 19 rally in Rittenhouse Square who called for reform of the Trump administration's immigration policies. Greta Anderson / AL DÍA News

The protest in Philadelphia is set to take place this Saturday at 11 a.m. in Logan Circle as part of the national day of action led by Families Belong Together.

Local immigrant rights organizations and groups, including the Shut Down Berks Coalition, the Pennsylvania Immigrant and Citizenship Coalition, Juntos, ACLU Pennsylvania, and others, have planned a protest to end family detention in Logan Circle for Saturday at 11 a.m. According to the Facebook event page, over 1,500 people have said that they will attend.

The Philadelphia protest will be one of hundreds planned to take place across the country as part of the day of action to end family detention and separation at the border. The action day was spearheaded by the coalition Familias Unidas, No Divididas, or Families Belong Together, and is supported by MoveOn.org and other national organizations.

Protests will also take place near the White House in Washington, D.C. and in sites across the country. In Pennsylvania, apart from the Philadelphia protest, there are events organized for Pittsburgh, Harrisburg, Doylestown, and Allentown. You can search for events near you here.

The coalition, according to their website, calls for reform of U.S. immigration policy and “opposes the cruel, inhumane and unjustified separation of children from their parents along the U.S. border with Mexico and at other ports of entry into the U.S."

Mural Arts Philadelphia is helping people prepare for the Philadelphia protest by hosting a sign-making and screen-printing workshop at their South by Southeast hub on Friday from 3-5 p.m. All sign-making materials will be provided for free, but participants should bring their own T-shirts if they are interested in screen-printing.

According to a recent report by the Philadelphia Inquirer, children and their families have been detained there for as long as two years, and the center itself could become a model for family detention for the Trump administration after the June 20 executive order which halted family separation at the border but called for an expansion of facilities and capacities for detaining families who enter the country without documents.

The Philadelphia City Council, led by City Council representatives Helen Gym and Maria Quiñones-Sánchez, recently passed a resolution calling on Gov. Tom Wolf and the Pennsylvania Department of Housing Services to shut down the detention center due to a sexual assault committed by a guard against someone detained at the center, and other charges of neglect and trauma. Pennsylvania Congressman Brendan Boyle has also joined lawmakers in pressuring Gov. Wolf to investigate allegations against the detention center.

Jasmine Rivera of the Shut Down Berks Coalition, which has been campaigning for an immediate shutdown of the family detention center, said that the many issues in how the immigration system operates are finally coming to the attention of the nation.

“I think this entire nation has come to a collective realization of just how broken and unjust the immigration system is in our country,” said Rivera in an email statement to AL DÍA.  “This isn't something that happened overnight, this is a system that has been criminalizing the immigrant community for over a hundred years. That's the root of it all, the criminalization of certain communities. That is why it's always been a part of our principles to fight back against the criminalization of all communities, whether they are non-citizen or citizens. We are all human beings with rights and we must defend those rights for everyone.”