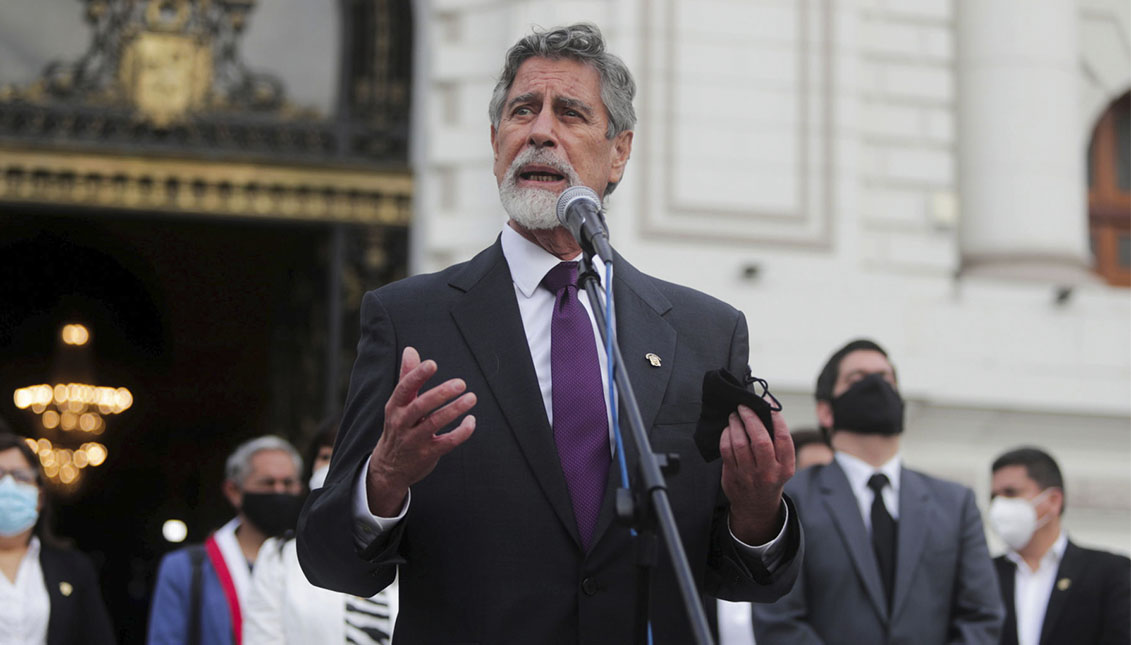 Francisco Sagasti, 76, is an industrial engineer and former technical advisor to the World Bank, and said he will hold elections in 2021. Photo: Sebastian Castaneda / Reuters.

Sagasti inherits the leadership of a country burned by corruption in the last decades between massive demonstrations and police killings.

Since Monday, the streets have been burning with rage in Peru as if decades of corruption had formed a flammable swamp where both political leaders and young citizens are sacrificed. A deformed orchard fueled by endemic corruption and government conspiracies that has intoxicated the whole of Peru.

For more than 20 years, the country has been plagued by grave scandals. Since the year 2000 and the Fujimori case, Alejandro Toledo (2001-2006), Alan García (2006-2011), and Ollanta Humala (2011-2016) have been accused of corruption. In 2018, Pedro Pablo Kuczynski resigned as president thanks to a report of vote purchases and ties to the Brazilian company Odebrecht, and his vice-president, Martín Vizcarra, was promoted to the position.

However, chaining catastrophes, Vizcarra was dismissed on Nov. 9 after the testimonies of witnesses affirming that he had received bribes when he was governor of Moquegua (2011-2014). The effort to censor actually began in September, when several media outlets pointed out a case of corruption through the contracting of motivational talks with the Ministry of Culture for a $50,000 price tag.

It was the second time something like it happened in the same legislature and taking into account the unicameral character of Peru, the President of the Congress Manuel Merino was promoted to the presidency constitutionally. However, the movement was interpreted by many citizens already fed up as just another trick to modify the electoral calendar.

The protests reached their peak on Saturday, Nov. 14, and despite the minister of the Interior assuring several times that no lethal weapons were used, Jack Pintado, 24, and Inti Sotelo, 22, died at the hands of police when they were shot in their torsos.

This further ignited riots and prompted the Attorney General to initiate proceedings against Merino for homicide, abuse of authority, and causing serious injury. The proceedings, together with the 94 injured and complaints coming from the National Human Rights Coordinator, led to Merino's resignation on Sunday.

Faced with the power vacuum, Congress tried to move forward with a supposed consensus candidate, leftist legislator Rocio Silva Santisteban, but reached only 42 of the required 60 votes, with 52 against and 25 abstentions.

But on Nov. 16, Congress tried again successfully to appoint center-liberal legislative candidate Francisco Sagasti of the Morado Party, with 97 votes in favor and 26 against. The 76-year-old politician, an industrial engineer and former technical advisor to the World Bank, is likely to hold elections in 2021. In his first speech, he addressed the young people in the riots, seeking the environment for a peaceful transition: "We cannot bring them back to life, but we can, from Congress and from the Executive, take measures so that this does not happen again."