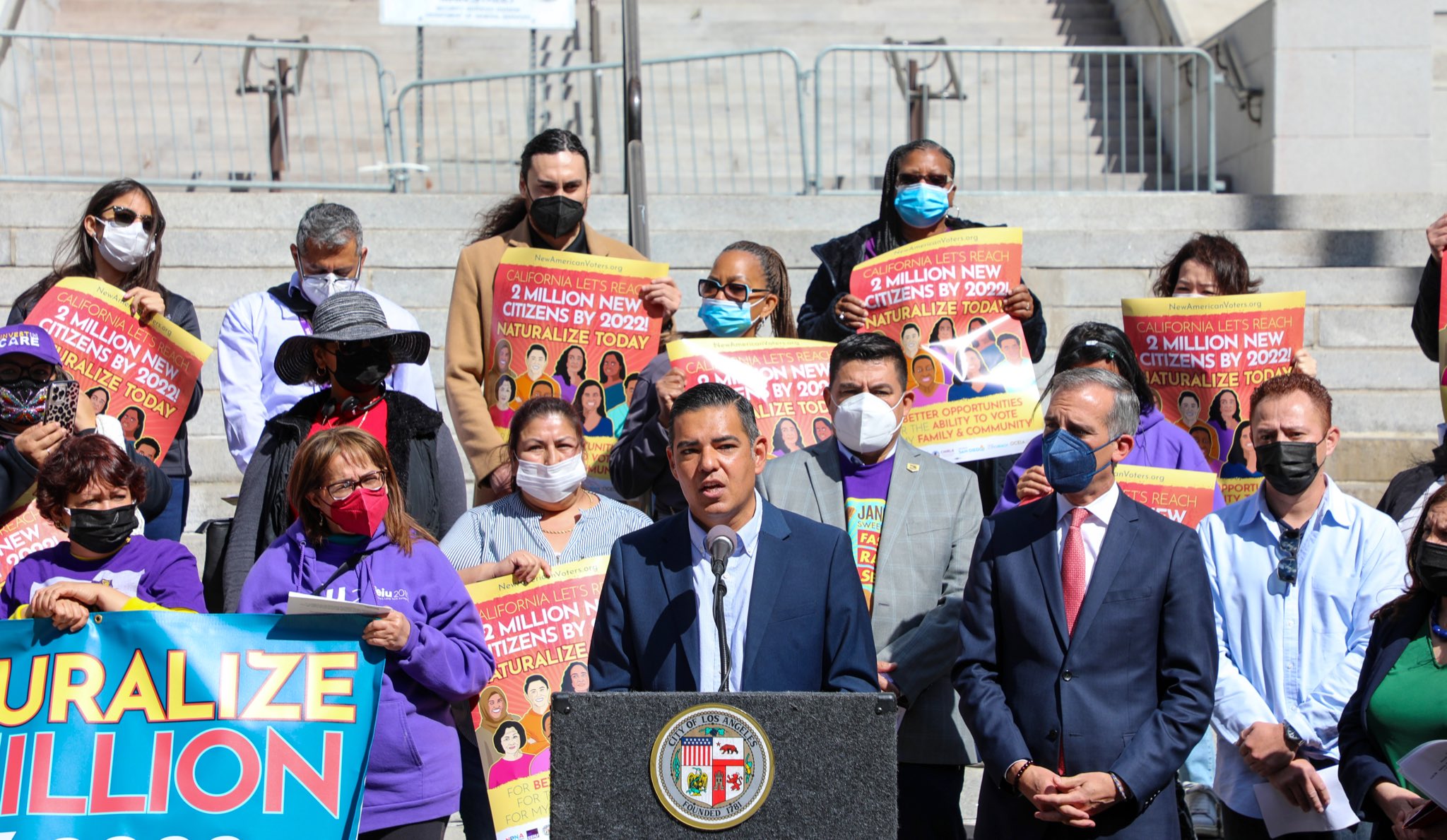 There are approximately 9 million legal permanent residents in the U.S. eligible for citizenship that have yet to apply.

On Tuesday, Feb. 22, the mayors of Los Angeles and Long Beach, California joined representatives from local and national groups at LA’s City Hall to kick off “Naturalize 2 million by 2022,” the nationwide effort to increase the ranks of U.S. citizens.

There are about 9 million legal permanent residents in the U.S. who are eligible for citizenship, but have yet to take the step of applying.

Today, we came together with @npnewamericans, @SEIU, Long Beach Mayor @RobertGarcia, and LA Mayor @ericgarcetti to launch the #2Millionby2022, a campaign to empower and encourage 2 million folks to become U.S. citizens! pic.twitter.com/ytG7Qvu8i6

“Sixty-three percent of the city of Los Angeles is either an immigrant or a child of an immigrant. And for a few of us who are grandchildren of immigrants, it probably gets up to 85 or 90% of our population,” said L.A. Mayor Eric Garcetti at the rally.

Long Beach Mayor Robert Garcia, who came to the U.S. from Peru with his family when he was five years old, said he became a naturalized citizen when he was 21, and became the mayor 15 years later.

“That would not have been possible had it not been for the hard work of going and earning that citizenship,” Garcia said.

The campaign was launched by the National Partnership for New Americans, a coalition of dozens of immigrant advocacy groups, in partnership with the LA-based Coalition for Humane Immigrants Rights (CHIRLA), and the Service Employment International Union.

“[Our] members are of every race & background who keep our airports safe & the janitors who clean many of the buildings we work in. Our members are eager to become new Americans so they can vote for an inclusive America,” said SEIU President David Huerta.

“I became a U.S. citizen for the same reasons I became a union member — it gave me a voice to express my opinions and the power to improve my livelihood,” said Elizabeth Lizárraga, a Lizárraga, a childcare provider and SEIU Local 99 member.

CHIRLA announced that United States Citizenship and Immigration Services fees for qualified Californians who apply for naturalization will be covered at various immigration services providers throughout the state as part of a $25 million state initiative.

“With this act of becoming citizens, they will be able to help their families and their communities,” said Angélica Salas, director of CHIRLA, calling on eligible permanent residents not to wait any longer.

During the press conference, Garcetti noted the role that immigrant workers played during the pandemic, whether in grocery stores, hospitals and other sites.

L.A. is a city of immigrants who come from all corners of the world looking for opportunities.

Through our @LAPublicLibrary 's New Americans Centers & various community partners, we stand ready to help naturalize all those eligible.

“Becoming a U.S. citizen, especially under the threats of the previous administration, meant such a relief. It was like taking a monkey off my back. It is truly something grand,” said Jose Mejia Landaverde, who was naturalized last August.