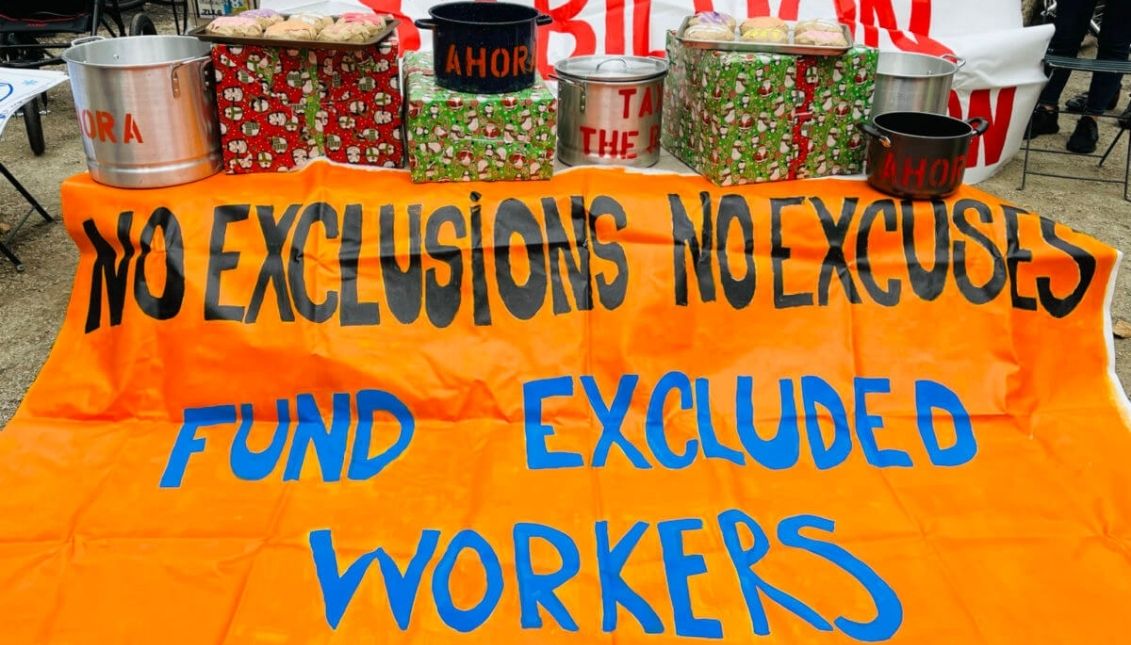 Hundreds of people marched in Manhattan on Dec. 10 to call on Governor Kathy Hochul to invest in the Excluded Workers Fund. Photo: Make the Road New York.

The community of migrants and undocumented people in New York raised several demands to receive job and health assistance.

On Tuesday, Jan. 25, migrants and undocumented people in New York City presented a bill proposal to the state legislature that includes new funds for excluded workers, access to health insurance, funds for housing, and the tightening of laws to avoid evictions.
The immigrant community, represented by the organization Make the Road New York, called on Governor Kathy Hochul and state legislators to prioritize policies that support the needs of the working class, during the "Respect and Dignity" virtual press conference.

Today, we launched our 2022 Respect and Dignity for All Platform!!!

Members like Reyna Tellez called on New York State to pass *ALL* our legislative priorities, including #Coverage4All.

“I am a mother of two children, and they worry about my health.”https://t.co/sAUdqEShis

Members are calling on the state to allocate $3 billion to the Excluded Workers Fund, which in 2021 received $2.1 billion for those impacted by the pandemic and national economic shutdowns. However, people who were undocumented did not have access.
At the conference, they also called on the legislature to pass the Coverage for All Bill, which seeks to provide health insurance to low-income residents, regardless of their immigration status.
"I have been working as a house cleaner for five years, but when the pandemic started, the job ended. In the middle of all this, I found a lump in my breast that the doctors said they couldn't remove because I don't have health insurance," said Reyna Tellez, who also emphasized that in the past she has had to pay up to $200 per doctor's visit and $300 for medicines for her treatment.
"We need Coverage for All so that we have access to health care and another 3 billion dollars in the Excluded Workers Fund," said the woman who cleans houses in New York.
Another bill seeking to legalize prostitution in the state was also within the protestors sights.
TAGS
Log in | Register
00:00 / 00:00
Ads destiny link