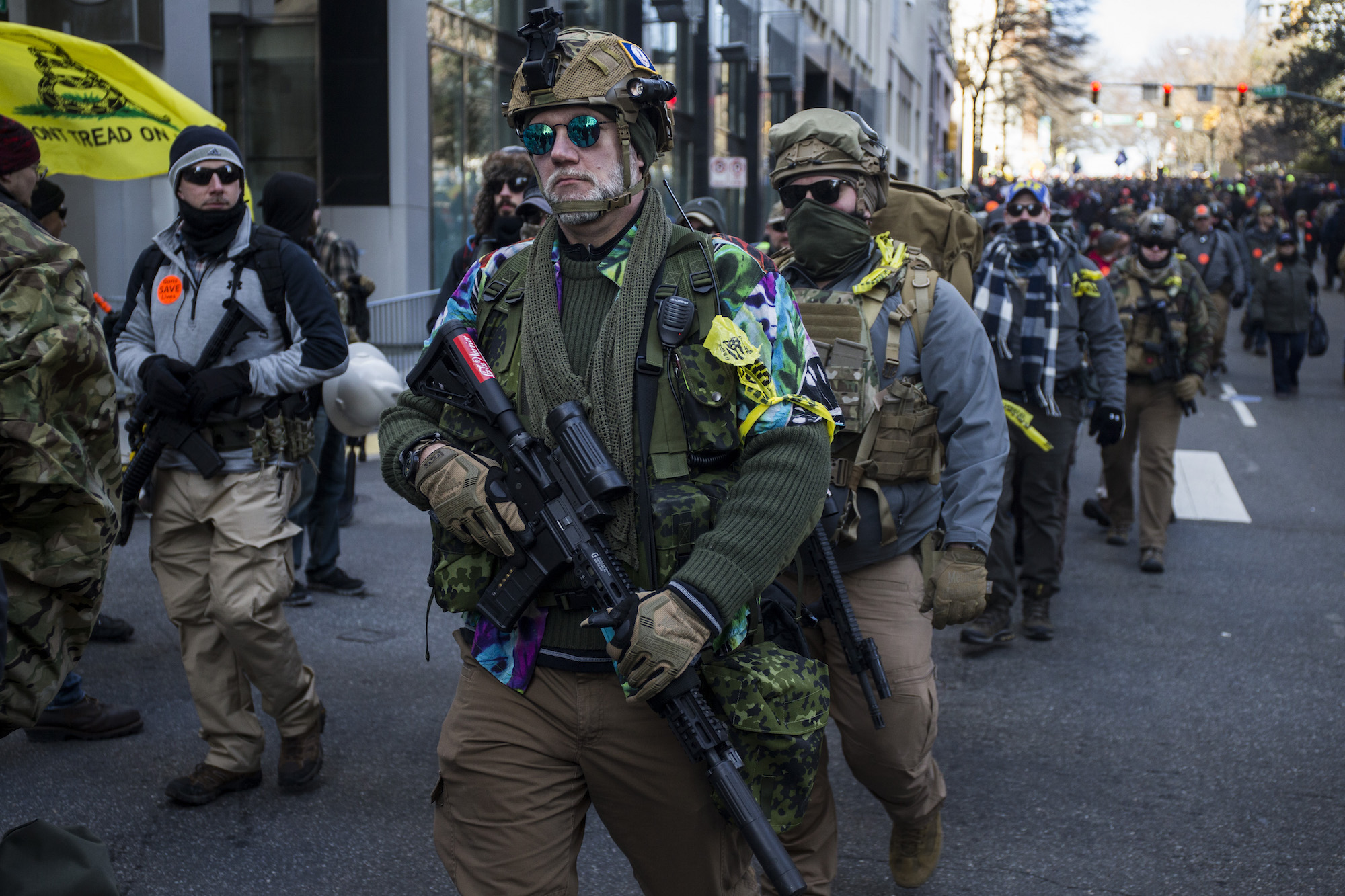 The March on Richmond: The gun-rights rally that said a lot about the U.S. right now

The Virginia Gun Rally scheduled for Martin Luther King, Jr. Day came with a lot of unfounded fears, but also a denial of a racist past and violent present.

In the course of that historic day, he gave his defining “I Have a Dream” speech, which advocated for an end to racism across the country; it has been quoted ever since when considering any further instance of inequality or progress in the U.S.

Now, more than 56 years after Dr. King’s historic March on Washington, a different gathering took place a little more than 100 miles south of the nation’s capital, just five days after what would have been his 91st birthday.

Martin Luther King Day 2020 was the 25th anniversary of its “Day of Service” tradition, which encourages Americans to engage in volunteering efforts to improve their communities.

But it will also be known for the thousands of gun-toting Americans who marched in Richmond, Virginia, demanding the state’s predominantly Democratic legislation rescind its proposed gun-reform legislation.

The three potential laws facing the most ire would limit the amount of handgun purchases per month to one, require universal background checks on all gun sales and allow certain localities to ban firearms in some public places.

The reforms haven’t gone over well in an open-carry state like Virginia. And the backlash attracted many gun rights’ supporters from other states to make the trip and join the march.

According to Virginia law enforcement intelligence, some of those making the trip from out-of-state were members of various state militias and hate groups that thrive on the misinformation and conspiracy found on online chat boards.

Some of these groups even organized over an app still sold in the Apple store and Google Play, according to Mother Jones.

In response to potential violence incited by these groups, Virginia Governor Ralph Northam declared a state of emergency that will last until Tuesday night.

The move banned all firearms in the capital of Richmond.

It’s a similar response to the one he had in the aftermath of violence at a 2017 Charlottesville “Unite the Right” rally, which left one counterprotester dead.

“They’re not coming to peacefully protest. They are coming to intimidate and cause harm,” said Northam.

Late last week, it seemed as though Northam’s concerns were right when six members of one neo-Nazi group were arrested after planning to attend the march.

However, the march came and went without any incidence of violence.

But while those who participated did so peacefully, as Dr. King did more than half a century ago, it doesn’t erase the history of guns in the U.S. and their use to kill, maim and oppress people of color.In part of his article for The Root titled “MLK, the KKK and the NRA: A Brief History of Racists With Guns,” Michael Harriot points to the creation of the second amendment by the founding fathers as the first example of guns being used for oppression.

“The Second Amendment never had anything to do with defending citizens from the tyranny of the government. It was always about the fear of black people,” he wrote.

Before the creation of the country, Harriot cites how most southern states maintained militias mainly for preventing slave revolts.

He traces that purpose to a dialogue between founding fathers James Madison and Patrick Henry regarding the bearing of arms on the Constitution.

A provision guaranteed that the population’s right to bear arms would not be infringed, but called for federal military intervention in the event of invasion.

“The right of the people to keep and bear arms shall not be infringed; a well armed and well regulated militia being the best security of a free country: but no person religiously scrupulous of bearing arms shall be compelled to render military service in person.”

Madison deemed the provision enough when also combating an armed insurrection (like a slave revolt), but Henry disagreed.

“If there should happen an insurrection of slaves, the country cannot be said to be invaded. They cannot, therefore, suppress it without the interposition of Congress,” Harriot quoted Henry.

As a result of Henry’s insistence, the Second Amendment was born to read like this:

“A well regulated Militia, being necessary to the security of a free state, the right of the people to keep and bear Arms, shall not be infringed.”

Notice the change to “state” from “country.”

Beyond the history of the Second Amendment — of which only a fraction has been presented — the current statistics on mass shootings and gun violence across the country are also staggering.

According to the Gun Violence Archive, an online database of gun violence incidents from 7,500 law enforcement, media, government and commercial sources across the country, there has been a mass shooting in 14 of the first 19 days of 2020.

The last occurred the night of Jan. 19, when someone opened fire at a Kansas City, Missouri bar and left two dead and 15 injured.

In cities like Philadelphia, gun violence has reached epidemic levels, with 356 murders tallied at the end of 2019 and 29 already on file in 2020.

Lawmakers in Philadelphia can meet and discuss and collaborate with communities all they want on the issue of gun violence, but many still say they are hamstrung by state legislation from creating any impactful local laws.

Regardless, they’ve forged ahead on multiple occasions only to be denied.

The most recent attempt was a version of one of the gun reform laws passed by the Virginia State Senate.

It allows certain localities in the state to ban firearms from some public spaces, and was introduced in the middle of a summer in which the city saw parks become settings for mass shootings on a weekly basis and rec centers close because of violence.

The bill lobbied by Philadelphia lawmakers would have banned all deadly weapons from all parks and recreation centers across the state, but was rejected by the majority-Republican state legislature in Harrisburg.