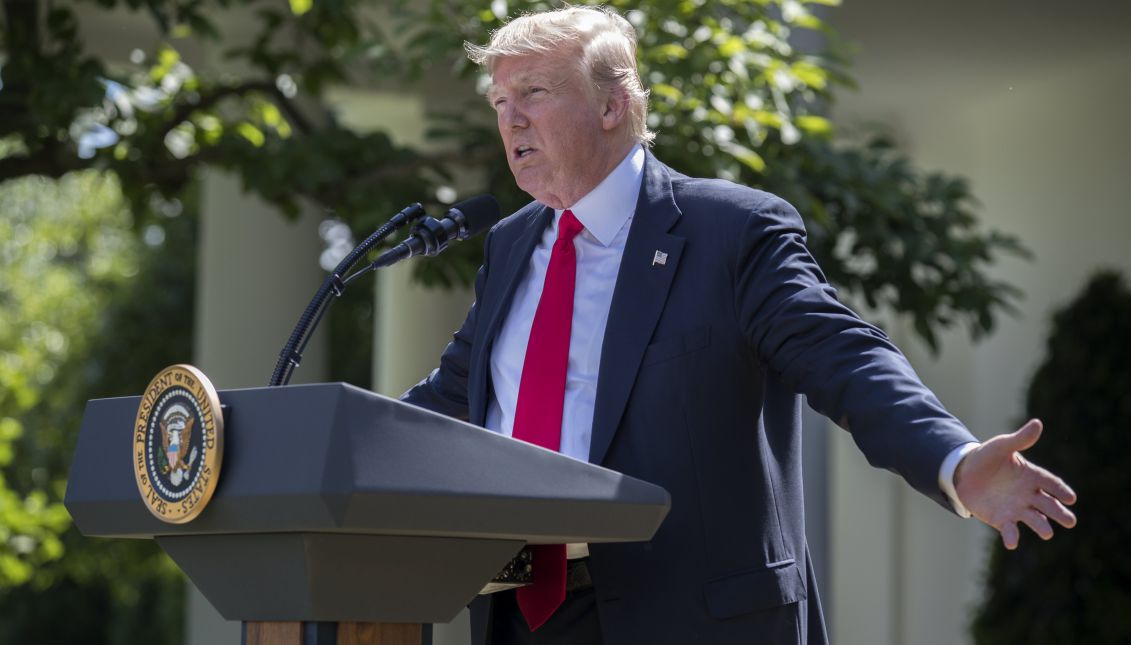 US President Donald J. Trump announces that the US is withdrawing from the Paris climate accord during a Rose Garden event at the White House in Washington, DC, USA, 01 June 2017. EPA/SHAWN THEW

There has been widespread international condemnation after President Trump's announcement that the US is withdrawing from the 2015 Paris climate agreement. Mr…

As if the planet was a big children playground, Donald Trump has decided to play the provocative role, again.

On Thursday, the US President announced he was withdrawing the country from the Paris climate change agreement, signed in 2015, infuriating political leaders and citizens around the world.

Almost every nation in the planet- except Nicaragua and Syria- have signed this landmark agreement to combat global heating by committing to reduce carbon emissions.

Despite the US being the second largest producer of CO2 emissions per capita in the developed world (Australia is top 1), Trump has decided to pull out the country from the Paris deal, arguing that it would harm job creation in the US, especially in the coal mining and industrial regions, where most of his voters are.

"We're getting out. But we will start to negotiate, and we will see if we can make a deal that's fair," said Trump.

"The Paris Climate Accord is simply the latest example of Washington entering into an agreement that disadvantages the United States," he added, as reported in EFE.

The decision was denounced immediately by supranational organizations, including the United Nations and the European Union, which called it very disappointing, since it rejected targets such as former president Barack Obama's proposal to reduce emissions by 28 percent by 2025, as compared to 2005 levels.

France, Germany and Italy jointly declared the pact could not be renegotiated. Theresa May, the British prime minister, separately expressed her disappointment in a telephone call to Mr. Trump.

“If we do nothing, our children will know a world of migrations, of wars, of shortage,” Emmanuel Macron, the French president, said in a video message in English inviting American climate scientists to France. By imitating the US President’s political language, Macron also made a call to the world to “make the planet great again.”

“Wherever we live, whoever we are, we all share the same responsibility: make our planet great again,” Macron said.

Australia, with a strong mining industry and the top CO2 emissions producers in the developed world,  has also reaffirmed the country's commitment to the Paris climate change agreement in the wake of the United States' withdrawal.

"The Turnbull Government is disappointed that the United States has notified that it will withdraw from this important international agreement", a joint statement released by the Minister for Foreign Affairs and the Minister for Environment and Energy.

During the election campaign, Donald Trump described climate change a big “Chinese hoax” and as a president, he assigned as director of the Environmental Agency (EPA) a climate change negationist like Scott Pruitt.

Pruitt and Trump can keep ignoring the voice of thousands of scientists warning that climate change is not a joke, nor an invention, as long as they want. But the reality is that 2016 broke the record for the hottest year on record. As did 2015 and 2014.

The decision to withdrawal from the Paris deal, however, had also some opponents inside the White House. Among those who supported the idea to stay in the agreement were secretary of state, Rex Tillerson, and Ivanka Trump, the president’s daughter and adviser.

The tech entrepeneur Elon Musk, founder of Tesla,  also said he is leaving Donald Trump's advisory council over the President's decision to withdraw from the Paris climate accords.

"Am departing presidential councils. Climate change is real. Leaving Paris is not good for America or the world," Musk tweeted.

Former President Barack Obama also made a public statement to say he regretted President Donald Trump"s move  to pull the US out of the Paris Agreemeng. Obama said that the countries that remain in the pact will "reap the benefits ... (in) jobs and industries created," and adding that Washington should be "at the front of the pack" in terms of taking action to prevent global warming.