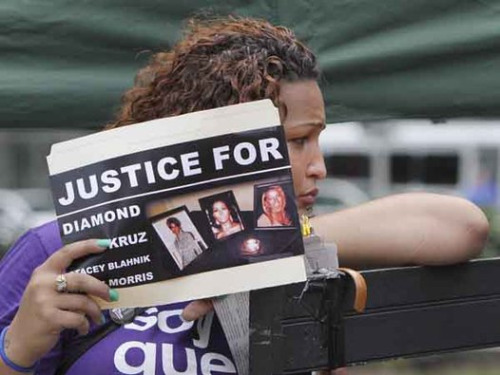 The long road to protection for TransPhilly

Does police handling of the murder of Kiesha Jenkins promise a safer Philly for the transgender community?

Kiesha Jenkins's murder was reported as the United States’ twentieth homicide of a transgender woman of 2015, but police say gender was not the motive for the killing. The man arrested and charged in the crime, Pedro Redding, told police he and three accomplices attempted to rob Jenkins, one of whom shot her dead after all four severely beat her.

Reports of the murder led to immediate hand-wringing over the lack of hate-crime legislation in Pennsylvania, long before any clear details were known. Initial reports said five or six men, not four, attacked Jenkins Tuesday morning.  She had been dropped off at 2:30 AM at 13th and Winghocking Streets, between the two expanses of the post-industrial old sinking homes of Logan and the more than 20 square blocks of Hunting Park.

The vicinity of Wingohocking and Old York Road is known as a marketplace for sex workers, among whom Jenkins had a reputation as a “high-earner,” say police, an apparent factor in her being targeted by Redding and his gang. Police tracked Redding down with tips from area residents that connected him to a string of serial robberies in the Logan area, and he was arrested at 3:30 a.m. Sunday.

The knee-jerk reaction of outrage is understandable — we should be outraged by every murder, surely — but Philadelphians in general have become more vocally protective of the LGBTQ community in recent years.

Thursday afternoon the District Attorney’s office announced a plea agreement with two of the three twenty-somethings charged in an assault on a homosexual couple last year, which was dubbed the “Center City gay-bashing” in the press and on social media. An online posse tracked down the suspects and identified them through a Facebook post, and two men and one woman were arrested for the attack. But despite much din about the need for enhanced prosecution of the trio, the two men will see no jail time at all. Kathryn Knott is taking her case to trial.

Kevin Harrigan pleaded guilty to simple assault and Philip Williams to aggravated assault. They were both charged with one count of conspiracy each and ordered to pay a total of just $942 in restitution for the crime. Harrigan will be on probation for three years and Williams for five, during which they are banned from Center City.

These two isolated cases suggest that hate crime legislation isn’t likely to make LGBTQ community members safer. In the case of Jenkins, confidence that the police will faithfully investigate crimes against trans sex workers and treat them with personal dignity will remove a time-hardened distrust and fear. The chasm between the community and its lawful protectors needs to be bridged, and only in the past few years has the department begun the painful triage necessary to repair the damage done.

Sex workers are prime targets for robbery because they always carry cash, and are less inclined to report crimes to police. And as in the LGBTQ community at-large, long-term studies show a higher rate of reported drug abuse and mental illness among sex workers. This, and of course the criminalization of prostitution, also means they more likely to engage with police and at a greater risk of harm in such interactions — which can be substantially reduced when officers have the proper equipment and adequate crisis intervention and deescalation training.

Former police chief and mayor Frank Rizzo was known to personally lead raids on homosexual establishments where he ordered mass arrests. Philadelphia and its politics are both very different now than during Rizzo’s reign of the 60s through 80s. Democratic mayoral nominee Jim Kenney has made his support of the LGBTQ community a major component of his campaign. But insensitive treatment by police and the news media has continued to alienate the transgender community, and with or without City Hall’s backing, they are by no means safe from hate-fuelled violence. And they are still subject to further alienation when the press and officials treat victims insensitively.

In 2013, Diamond Williams was murdered with a screwdriver and a hatchet. A man allegedly killed her after finding out she was transgender, having already had “relations with her.”

The Daily News referred to Williams as “she” in quotes, contrary to the AP style guidelines which call for reporters to use the pronoun preferred by their subjects, or by which they are publicly known. The gay advocacy organization GLAAD said the misgendering had “doubly victimized” Williams. CBS Philly outright referred to Williams as a man in its headlines.

Earlier in 2015, trangender woman London Chanel was murdered, and in August police arrested a man for nearly beating a transgender woman to death.

In testimony to the Task Force on 21st Century Policing, LGBTQ organizations Streetwise and Safe highlighted a nationwide pattern of gender-based discriminatory practices by U.S. police, and offered a program of reforms, pointing to the role of community organizations in providing oversight of how new policies are implemented.

Philadelphia Police incorporated a new policy as of December 2013, Directive 152, which requires officers to “address the public using pronouns, titles of respect, and preferred name as expressed by the individual.”

Perhaps the department wished to get a step ahead of a shift in popular opinion (and thus the law), or maybe they recognized that referring to someone by their preferred pronoun generates a baseline of respect and that is crucial to public safety.

Deja Alvarez of the Transgender Health Information Project says Directive 152’s requirements are crucial to insuring fair treatment of the LGBTQ community, and credits the department with an earnest attempt at reform.

“I think they’ve demonstrated, particularly with the Kiesha Jenkins case, that they are trying to do better. Of course they do have a longstanding history of  not doing well at all when it comes to investigating any crime against a transgender person. So I think that historically that we should not have felt safe,” she told AL DÍA.

Alvarez is transgender, and herself filed a complaint with the Police Advisory Commission in 2002, for an alleged incident of verbal abuse in which her companion, Finesse Kelly, was wrongfully arrested, the complaint claims.

Alvarez tries to make sure her community knows about Directive 152, and is aware that there are mechanisms in place if officers do not abide by it. “Are they gonna get it right all the time? No, they’re not. And having someone like Deputy Commissioner Bethel, who was instrumental in Directive 152 and is all about enforcing it, means there are people now that can help them navigate the system and to do something about it.”

Even though, as Alvarez noted, there was at that point no debate in the press or from authorities about whether to refer to Jenkins as female, the issue of “he” or “she” was forced by a lone reporter at the press conference at Police Headquarters on Monday, based on an article that quoted the victim’s parents as still thinking of Jenkins as their son.

22 year-old Temple University student Kiesha Jenkins, a Philadelphia woman "with a mother and father who loved her very much,” as described by Captain Clark, was pronounced dead at 2:53 a.m. on October 6th.  Pedro Redding may not have chosen Jenkins for the attack, which he told police he planned, because he hates or wants to hurt transgender persons. But it is very likely Jenkins’s gender identity, and certainly her source of income, contributed to her being victimized by opportunistic criminals, who single out such marginal persons and take advantage of their conditioned fear of police.

Fundamental reforms in the past several years followed decades of social and political progress, hard-won by the LGBTQ community battling entrenched resistance. Reforms yet in place, even those already two years old like Directive 152, cannot change a professional culture overnight, and even if they could, the public would never believe it. More introspection and even investigation is in order, to remedy cold cases and old negligence that will not go away with but the gradual rotation of the Earth.

Kenneth Lipp is a journalist in Philadelphia and editor of the local news site PhillyDeclaration.org.