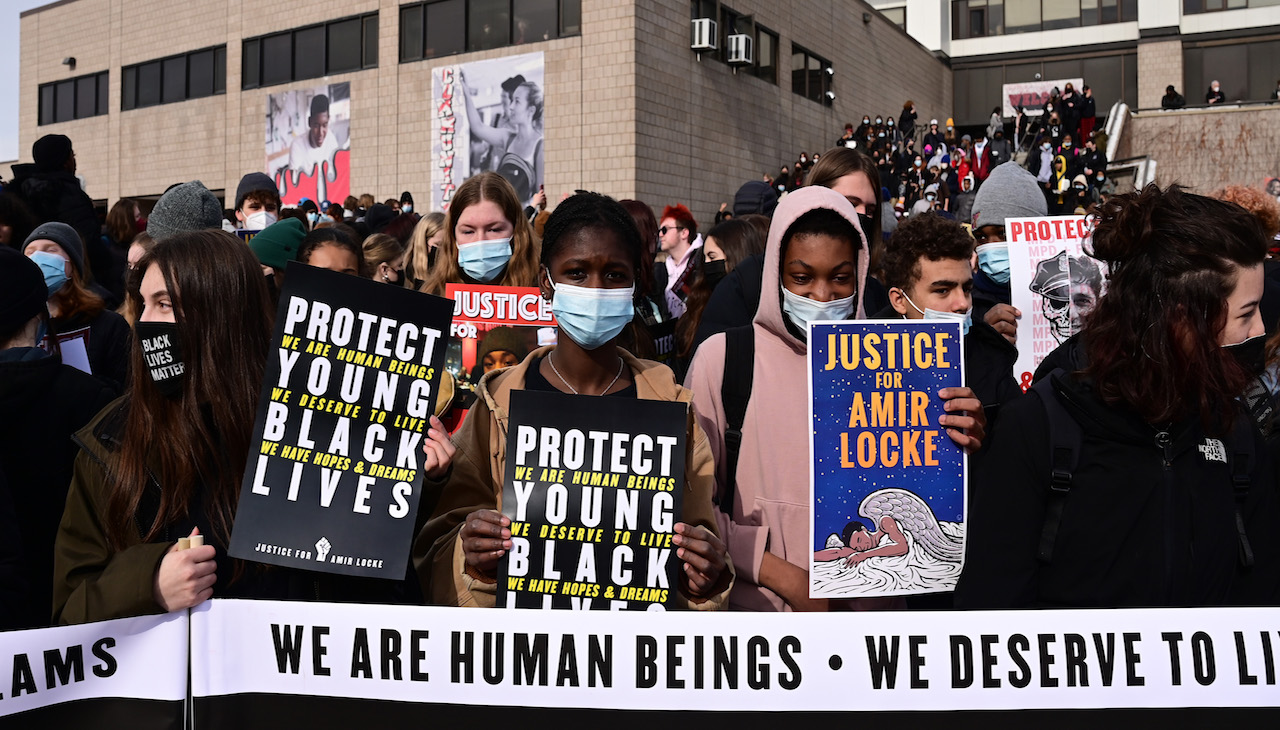 Students in Minnesota walkout over the police killing of Amir Locke

More than a thousand students marched to the Governor’s office to demand justice for the 22-year-old that was killed in a police raid.

On Tuesday, Feb. 8, Minnesota students walked out of class to demand justice for Amir Locke, a 22-year-old Black man killed during a police raid in Minneapolis last week.

More than a thousand students marched from Central High School to the Governor’s Residence in St. Paul to protest the police killing.

The demonstration was led by the nonprofit student organizing group called MN Teen Activists, which was formed in May 2020 by Twin Cities metro area students in response to injustices they witnessed at their schools.

The group had a list of demands at the rally, including a ban on all no-knock warrants and the resignation of Minneapolis Mayor Jacob Frey and the city’s interim Police Chief Amelia Huffman.

Central High senior Navaeh Wiley told MPR News that she wants adults to understand teenagers’ are old enough to understand what is happening around them.

“I want everyone to understand that we truly want the best for our youth community and community in general, and we are just trying to make the world a better place for our future and futures of other youth,” Wiley said.

“I lost my innocence at 10 when running outside, I would decide against raising my hoodie to protect my ears because Trayvon Martin couldn't,” Tougnan said.

The rally also called for Mark Hanneman, the Minneapolis SWAT officer who shot and killed Locke during the raid, to be fired immediately.

Early in the morning on Wednesday, Feb. 2, Locke was awoken from sleep as Minneapolis police carried out a no-knock warrant at the apartment he was staying in. He was shot after he grabbed his legally obtained firearm. Locke was not listed on the warrant.

Body-camera footage of the shooting showed that the 22-year-old was sleeping on a couch with a gun when officers burst through the threshold. Officer Mark Hanneman shot Locke three times roughly 10 seconds after entering the apartment.

Grace Mutondo, a student at Central, told WCCO that the students want to see Minnesota get rid of no-knock warrants like Kentucky did after officers fatally shot Breonna Taylor in March 2020.

Since the beginning of this year, Minneapolis police have executed at least 11 no-knock search warrants, WCCO reported. Last year, the city issued 78, a significant decrease from 171 in 2020.