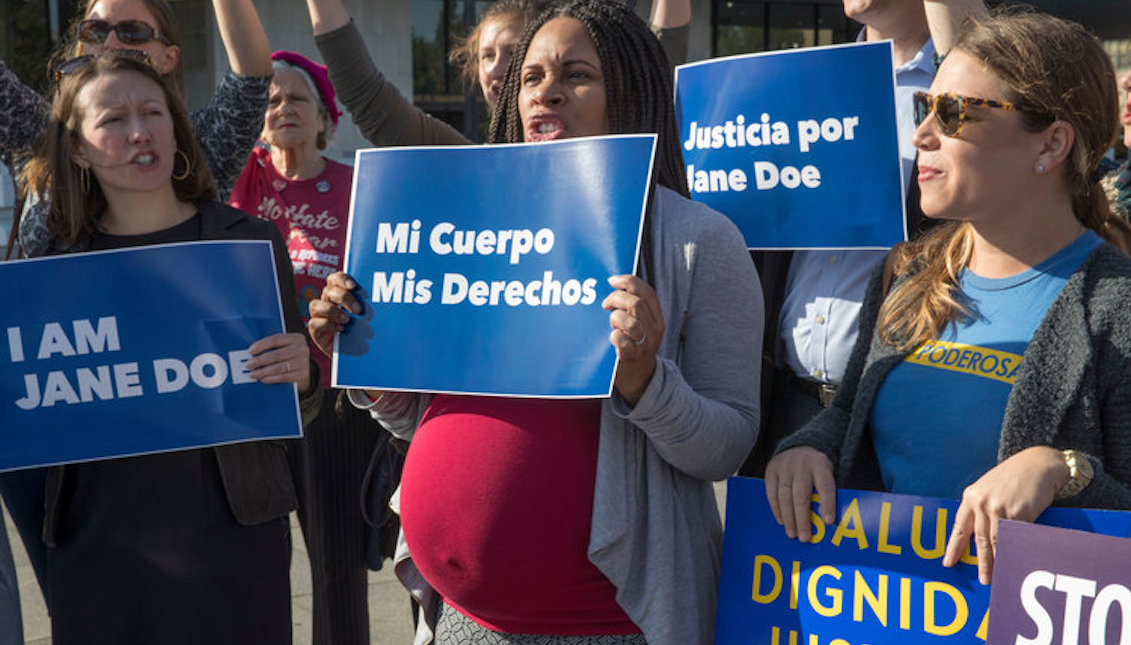 Activists demonstrate in support of a pregnant 17-year-old being held in a Texas facility for unaccompanied immigrant children to obtain an abortion on Oct. 20, 2017. AP Photo/J. Scott Applewhite

The Supreme Court supports the Trump Administration in the case of an undocumented adolescent who obtained an abortion in a refugee shelter.

What was once the campaign flag of the Obama Administration is now another tool for Donald Trump’s presidential vendettas.

The right to planned motherhood and abortion has been a negotiation mechanism of the Trump campaign and the most conservative Republicans, who argue religious positions against abortion.

And on Monday, the Supreme Court gave the president's government a victory by ruling out a lower court decision that allowed an undocumented teen to obtain an abortion after an arduous battle between the lawyers of the American Civil Liberties Union (ACLU) and the Department of Justice.

The litigation came after a young Central American woman, identified as Jane Doe, managed to obtain treatment to interrupt her pregnancy, which she became aware of "shortly after crossing the border," the Washington Post explained.

"(The young woman) persuaded a Texas judge that she was mature enough to make the decision to end the pregnancy without the notification of her parents, whom she said she feared, according to her lawyers," the Post continued. "But the administration said it would not 'facilitate' abortion for undocumented minors in federal custody."

The authorities then gave her the option of "either not getting the abortion or accepting the deportation and looking for ways to interrupt her pregnancy somewhere else," The Sun Daily reported.

According to statements by the director of the Office of Refugee Resettlement, E. Scott Lloyd, the government agency "cannot be a place of refuge while we are at the same time a place of violence," adding that "we have to choose, and we ought to choose to protect life rather than destroying it."

After the ACLU took the case, a federal appeals court ruled on October 24 that the girl had the right to access the procedure, which took place the next day.

While the decision could have opened up options for so many undocumented young girls who arrive in the country in a similar state—the majority of whom are raped on their way across the border—the decision of the Supreme Court this week sets an irreversible pattern so that the case is not repeated.

According to the Justice Department's appeal document, the lawyers "said they had a deal with the girl's lawyers that would have given them time to appeal (the) ruling," the Post reported. "Instead, the girl was able to have an abortion before the government lawyers filed, making her request moot and opening the administration to criticism from anti-abortion groups that the Justice Department moved too slowly.”

Despite the request made by government lawyers to "admonish" the young woman's lawyers, the Supreme Court only dismissed the previous sentence, eliminating a fundamental legal precedent for hundreds of undocumented minors who end up in detention centers after being victims of abuse and violence.