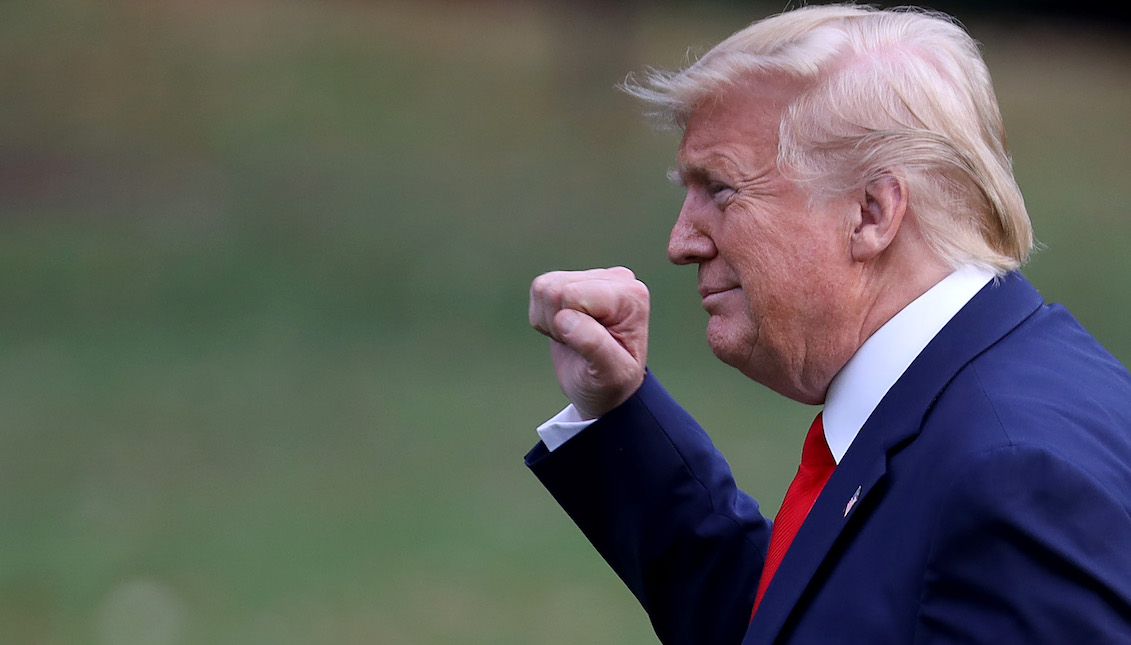 WASHINGTON, DC - October 3: U.S. President Donald Trump shows his fist when he returns to the White House on October 3, 2019, in Washington, DC. Trump traveled to Florida earlier in the day. (Photo by Win McNamee/Getty Images)

Ukraine, China and how Trump violates the law in broad daylight

Reports showed new attempts by the U.S. president to abuse his power and extort foreign governments in exchange for interference in the 2020 presidential…

It is no longer about conspiracy speculations or theories. President Donald Trump has again asked a foreign country to interfere in the U.S. presidential elections.

Last Thursday, Trump publicly urged China to investigate his Democratic opponent Joe Biden, just as he did in a phone call last July with the President of Ukraine - an issue that triggered the political impeachment against him currently ongoing in the House of Representatives.

This time, and without a “corruption” argument that supports his requests, Donald Trump has asked the Chinese regime to investigate former Vice President Joe Biden and his son, Hunter Biden, for alleged “corruption in their political and business deals in Ukraine and China,” the BBC reported.

The links between Hunter Biden and the Ukrainian natural gas company Burisma in 2014 coincided with a political transition after the pro-Russian president was deposed by a social and political movement that opposed the Russian invasion in Crimea.

Simultaneously, then-Vice President Joe Biden "pressured the Ukrainian government to fire its chief prosecutor, Viktor Shokin, whose office had been scrutinizing the oligarch owner of Burisma," the BBC continues.

Despite accusations from the White House, the Ukrainian government itself has said that one thing had nothing to do with the other.

That is why the insistence of Trump and his personal lawyer, Rudy Giuliani, is only framed in what is now an investigation for abuse of power by the president.

After the publication of a complaint by a whistleblower in the Intelligence Department that evidenced the extortion of the president against Ukraine, Donald Trump now faces a scandal ten times more dangerous than the investigation for Russian interference in the 2016 elections.

But the strategy is the same: the Trump campaign asks foreign governments to investigate their opponents in exchange for internal favors once in office.

For Ukraine, it was the economic aid approved by Congress to help them with their efforts against Russia and, now with China, the matter is even worse.

On Thursday, the president said: “I have a lot of options on China. But if they don't do what we want, we have tremendous power.”

This threat only reaffirms the suspicions handled by the Committees in the House of Representatives about the need to subject Donald Trump to a political trial.

And with China, the hard currency is the trade war that the administration has kept ongoing for several months.

Although China has a principle of non-interference in establishing diplomatic relations with other countries, two people familiar with the discussion said “Trump promised to keep quiet about anti-government demonstrations in Hong Kong if the talks on trade progressed,” CNN explained.

The autocratic nature of the Chinese regime transforms this abuse of power into possible coordination far more distant from Western democracy and confirms the taste of the U.S. president for styles of government that border the dictatorial.