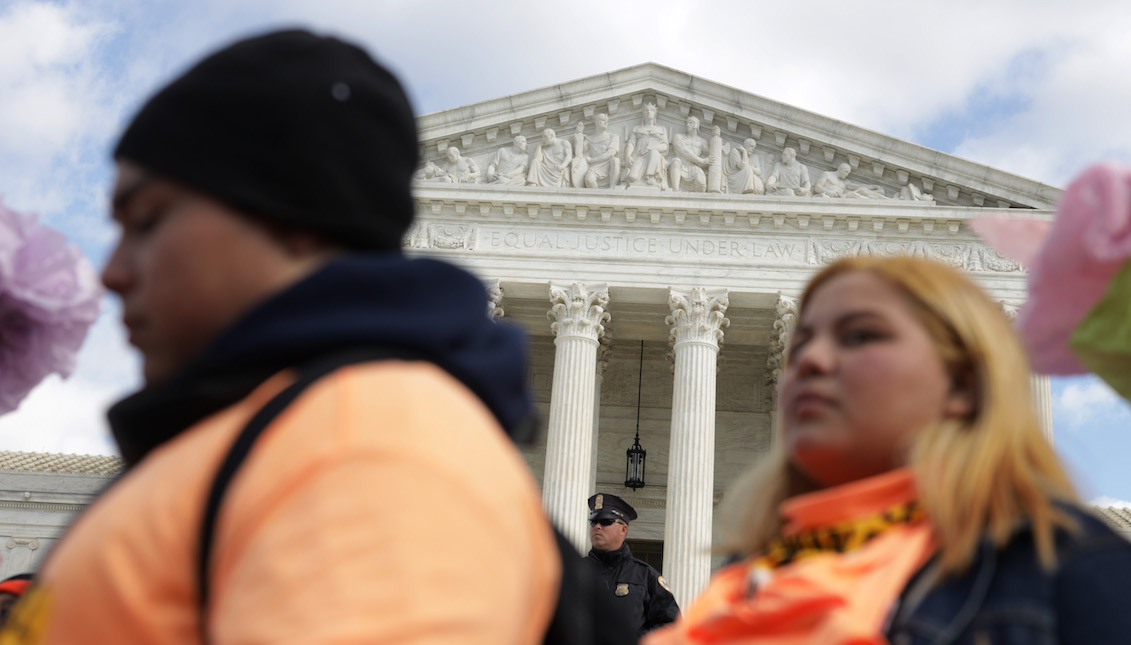 WASHINGTON, DC - NOVEMBER 08: A police officer stands guard as student immigration activists participate in a rally defending Deferred Action for Childhood Arrivals (DACA) in front of the U.S. Supreme Court after they walked out from area high schools…

DACA to the Supreme Court: the day is here

The day finally arrives for the Supreme Court to hear arguments about the future of the Deferred Action Program (DACA).

After years of uncertainty, the hundreds of thousands of immigrants who arrived in the country as children will finally have a legal decision around the temporary blockade that their legal status suffers due to the Trump administration's policies.

The Supreme Court will hear the arguments for and against the case on Tuesday and will make a decision on the future of more than 700,000 young immigrants known as Dreamers, whose future in the country is at stake after President Trump rescinded the program during his first year in office.

Despite the temporary blockage of minor courts - which eventually brought the case to the Supreme Court - these young people have had to pause their lives under the speculation of possible deportation.

The Obama administration initiative in 2012 sought to temporarily protect these young people, who arrived in the country without documents as children and by the hands of their parents, granting them work permits and all the benefits of U.S. citizens under the commitment to graduate from high school and pass a background check.

Following the government's decision to suspend the program at the insistence of heavily Republican states, sentences such as that of Texas federal judge Andrew Hanen allowed the case to reach other instances.

In September 2018, Hanen wrote that “the states could have brought a lawsuit against the entire program in 2012 or anytime thereafter”, but the fact of having allowed DACA to continue its course for 6 years annulled the argument.

The Department of Justice's response was to put pressure on the Supreme Court for a quick sentence, skipping the due process, just two months after Hanen's decision.

Finally, the Supreme Court decided to hear the arguments a year later, which brings us to this day.

As the Houston Chronicle explained, this is one of the most important cases in this term and will determine "the scope of the presidential powers over immigration."

"A majority of justices have consistently agreed that Trump has expansive latitude with on immigration," explains the media referring to previous sentences in favor of the president as in the cases of the Muslim immigration ban or the suspension of asylum at the border.

However, Justice John Roberts' decision to block the administration in its attempt to add the citizenship question to the 2020 census assumes that the DACA decision will not be so simple.

What is at stake is not only the future of young Dreamers but a sort of control over the administration's broader anti-immigrant measures.

That is why hundreds of people have taken to the streets to demonstrate and exert pressure in the immediate vicinity of the legislative body to let them know that they are here to stay.

Our #HomeIsHere‼️ We are here in front of the Supreme Court of the United States to make sure they hear our message. Our communities support #DACA recipients and our immigrant friends and loved ones! #HereToStay #SCOTUS pic.twitter.com/jqYqr6BCu0