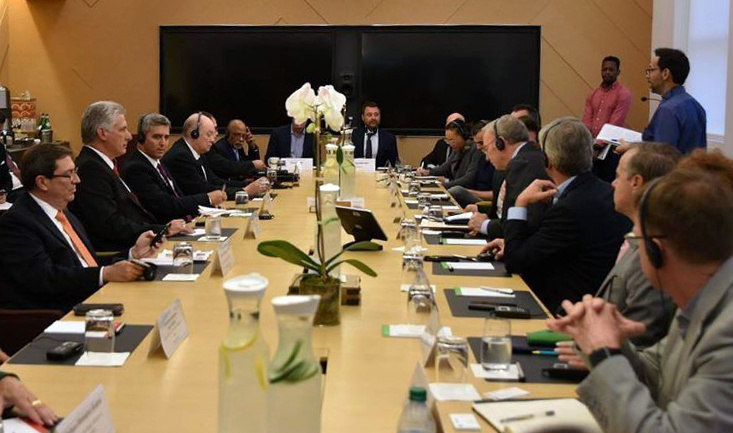 Cuban President Miguel Diaz-Canel has repeated his determination to promote the computerization of society since he took office in April.

Cuban President Miguel Diaz-Canel met in New York with executives of the main U.S. technology companies at a time when the Caribbean country seeks to shrink the gap that separates it from the rest of the world in terms of Internet access.

At the meeting that took place Monday at Google's New York office, Diaz-Canel conversed with top executives from Google, VaynerMedia, Connectify, Mapbox, McKinsey & Company, Virgin Group, AirBnB, Revolution, Twitter, Microsoft, Bloomberg and Cresta about matters related to advanced technologies and the "development of that branch to its top capacity" in his country, Cuban state media reported.

Diaz-Canel told the U.S. execs that the computerization of society is a priority of the government at a time when the island is about to have, for the first time, a mobile Internet connection by means of a 3G network (third generation of wireless mobile telecom technology) which is expected to begin service within the next few months.

The Cuban leader, currently in New York to take part in the United Nations General Assembly, said the U.S. economic embargo on his country is the main obstacle to Internet development to its top capacity.

The U.S. executives, for their part, "were interested in the orientation given by Cuba to society computerization with educational purposes and to solve social problems and public services," Cuban state media said.

The constant economic crisis, the U.S. embargo and the distrust of the government's old guard about opening paths of communication to the outside world make Cuba one of the most disconnected countries in the world, with Wi-Fi only available at a limited number of locations and at very high prices, and still without broadband networks accessible with mobile devices.

Diaz-Canel, the first Cuban leader born after the 1959 Revolution and a career electronic engineer, has repeated his determination to promote the computerization of society since he took office in April.