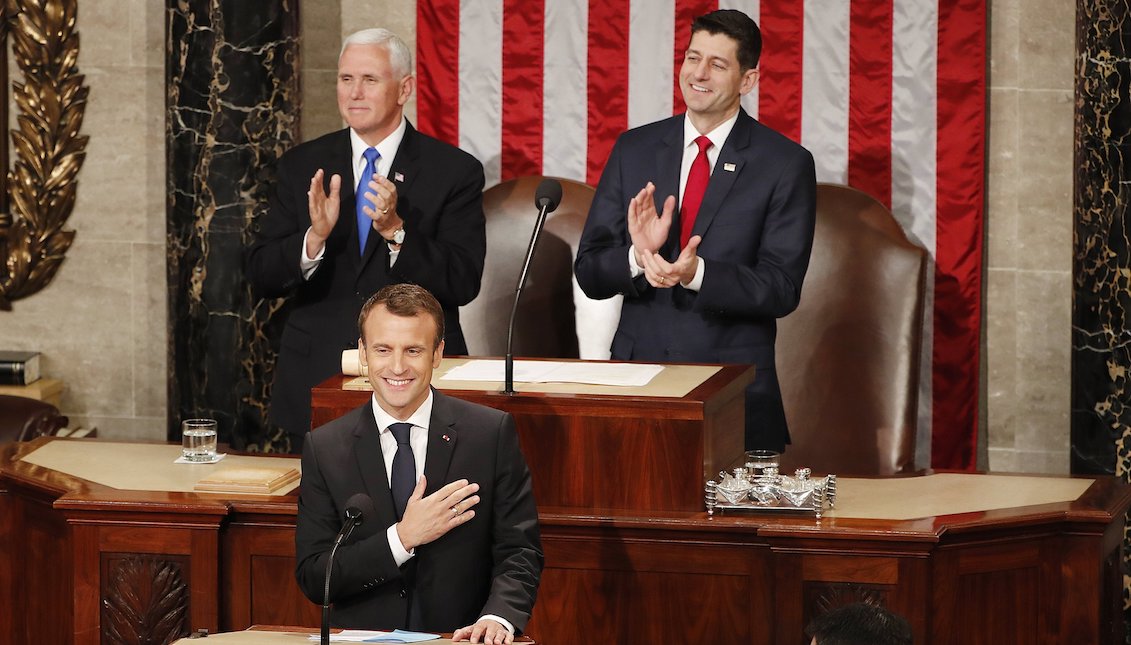 The president of France, Emmanuel Macron, offers a speech to both houses of the US Congress, at the close of a three-day state visit in which he has talked about trade, Iran, and Syria with his counterpart, Donald Trump. EFE / Erik S. Lesser

Macron: when gallantry is more powerful than criticism

After a visit full of camaraderie, French President Emmanuel Macron eclipses Donald Trump and criticizes him directly with a smooth speech before Congress.

French President Emmanuel Macron has spent months earning the affection and admiration of US President Donald Trump, known for his weakness for men he may consider "equal."

After arriving in Washington on Monday, Macron addressed the Congress on Wednesday to deliver a speech that, in all respects, bluntly refutes the positions of President Trump; but he did it with the best of gallantries.

"Some people believe that securing current industries and their jobs is more urgent than transforming our economies to meet the challenge of global change," he told Congress. "I hear… but we must find a transition to a low carbon economy. What is the meaning of our life, really, if we work and live destroying the planet while sacrificing the future of our children? "

Any other president who had tackled such a sensitive issue as global warming in Trump's own workplace would have been "shattered" in his personal Twitter account.

But the charming Macron not only escaped the presidential wrath but also had an open field to talk about other issues that the US president has transformed into personal whims.

According to the Washington Post, Macron called the "free world" to "push aside the forces of isolationism, withdrawal, and nationalism," reinforcing his position of multilateralism "that you built," he said, referring to the United States.

Regarding the nuclear agreement with Iran, the French president assured that it will remain within the pact "because we signed it". "We should not abandon it if we don’t have something more substantial instead. That is my position," said Macron, knowing that President Trump has strongly attacked the pact signed by the previous administration, calling it "insane" and "ridiculous."

Finally, the French president addressed the issue of "fake news", but from a totally different perspective to that of his US counterpart.

"We must fight against the ever-growing virus of fake news," he said, referring to "rumors and false claims spread on social media," CNN explained.

According to the perception of those in the room, as the French president spoke, more Democrats applauded his words and fewer Republicans joined in the cheers.

And is that the French president has fundamental differences with Trump that are inevitable. According to TIME Magazine, "Trump had all but endorsed Macron's right-wing opponent, Marine Le Pen, last year before the election, and Le Pen ran on many of the views Macron was arguing against in his speech."

However, and with his characteristic smile, the French president assured that "together, we will prevail".