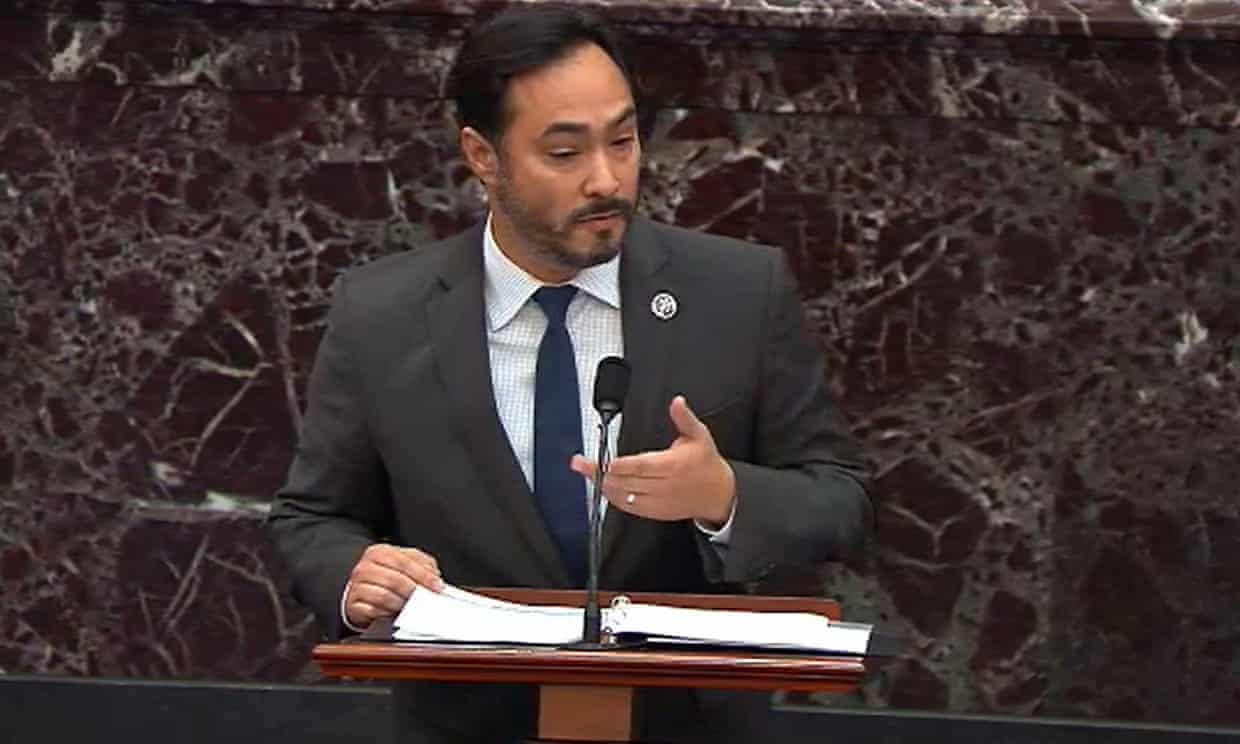 Castro is one of nine impeachment managers selected by House speaker Pelosi to present the case for former President Trump’s impeachment following the deadly insurrection at the Capitol on Jan. 6. Photo: Getty Images

“The most combustible thing you can do in a democracy is convince people that an election doesn't count.”

Just as the Impeachment managers who provided evidence before him, Rep. Joaquin Castro (D-TX) took to the Senate floor on Feb. 10 to present more against former president, Donald J. Trump.

House impeachment managers have 16 hours over two days to present their arguments before a final vote. So far, they have unveiled new footage of the deadly insurrection on Jan. 6 in the U.S. Capitol, and have each provided their individual testimony with the same goal.

The Senate is unlikely to achieve the two-thirds vote required to convict the former president of insurrection, but managers like Castro are still putting their all into their testimonies.

He took to the Senate floor early in the afternoon on the second day of Trump’s Senate Trial, focusing on “The Big Lie,” what Trump’s fabricated allegations of fraud have come to be known as.

WATCH @JoaquinCastrotx break down “The Big Lie” and why we need to hold Donald Trump Accountable. pic.twitter.com/dZNKdZs2Z4

"There's a saying that a lie can travel halfway around the world before the truth has a chance to put on its shoes,” Castro began, connecting to the former President’s incessant allegations. “The point of that saying is that a lie can do incredible damage and destruction, and that's especially true when that lie is told by the most powerful person on earth."

Castro said the attack wasn’t spurred from one speech, nor was it an accident.

“The evidence shows clearly that this mob was provoked over many months by Donald J Trump. And if you look at the evidence, his purposeful conduct, you see that the attack was foreseeable, and preventable,” he said.

“Beginning in the Spring of 2020, President Trump began to fall behind in the polls,” Castro explained, outlining that by July, Trump  had reached his all-time low at the time — 15 points behind his opponent Joe Biden.

“And he was scared. He began to believe that he could legitimately lose the election and so he did something entirely unprecedented in the history of our nation. He refused to commit to a peaceful transition of power,” Castro continued.

He, like previous testifiers, showed video evidence to the Senate, but focused not on never-before-seen footage of the insurrection, but a curation of extensively-documented instances over the past year where the former president did as Castro outlined.

The key aspect of Castro’s account of events is the communication that the plan to surge the Capitol was instigated months in advance. The former president insisted that the election would be rigged, sparking anger from his supporters months before any votes had been cast.

“President Trump was given every opportunity  to tell his supporters, ‘Yes, if I lose, I will peacefully transfer power to the next president.’ Instead, he told his supporters, the only way he could lose the election is if it was stolen,” said Castro.

In various TV interviews, speeches and tweets, the former president repeated and was unyielding in his statements that there would be no transfer of power, rather, a continuation.

“That was the point,” Castro continued. “He didn't care if the claims were true, he wanted to make sure that his supporters were angry. Like the election was being ripped away from them.”

The House impeached Donald Trump on Jan. 13 for inciting a deadly riot on the Capitol exactly a week before. Democrats and some Republicans blame the president and other Republican leaders like Ted Cruz and Josh Hawley for fueling the violence that resulted in five deaths, extensive damage, and a global embarrassment.