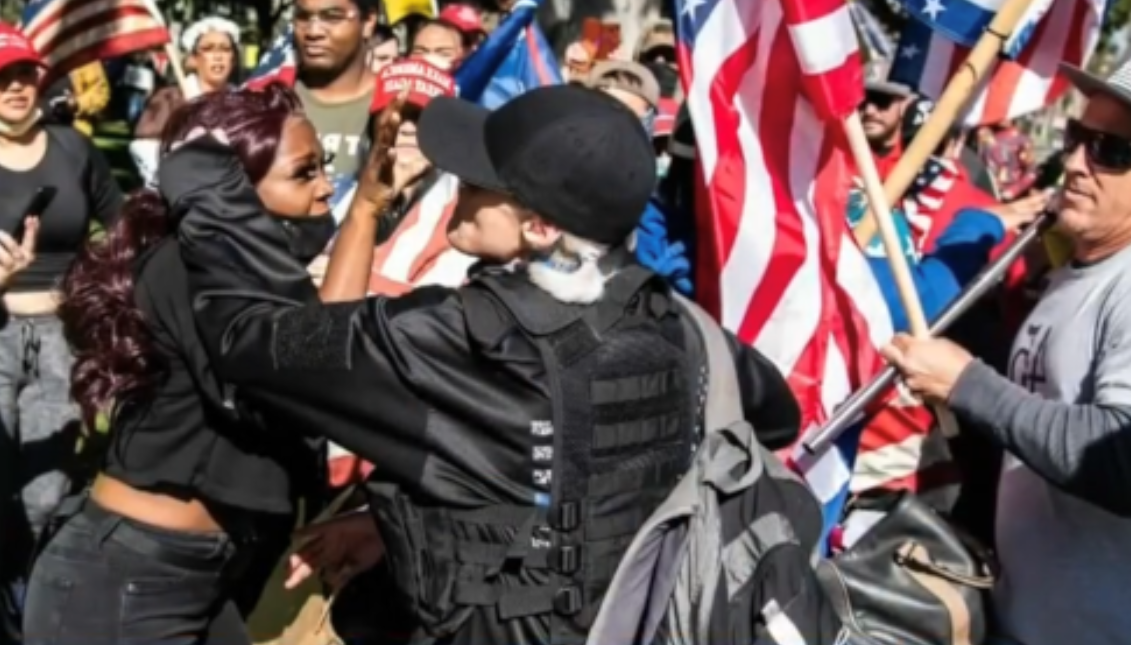 As the U.S. Capitol was under siege, a Black woman was attacked by Trump supporters in Los Angeles

Berlinda Nibo said she thought she was going to die during a violent encounter with a Pro-Trump rally on Jan. 6.

“It seemed like these people were trying to kill me, to use me to make some kind of statement or something.”

These are the words of 25-year-old Berlinda Nibo, a Black woman who was attacked by a group of at least 20 pro-Trump demonstrators in downtown Los Angeles on Wednesday, Jan. 6, the same day that a violent mob of Trump supporters breached the U.S. Capitol building.

Nibo and a friend were on the way to have a late breakfast when they inadvertently found themselves in the middle of a pro-Trump rally in front of Los Angeles City Hall.

Upon realizing that they were the only Black people around, Nibo and her friend decided to leave. They crossed the street and started to walk past the crowd of about 200 people, when Nibo noticed that her friend’s phone was missing. Nibo’s friend hopped on a skateboard and began rolling through the crowd, searching for the phone.

Although Nibo was close behind her friend, people began to break away from the crowd and follow her.

This was when the taunts and accosting began.

According to L.A photojournalist Raquel Nalicchio, who started protectively trailing Nibo when she saw her walking alone past the crowd, demonstrators were asking Nibo questions such as: “Do you know who Joe Biden is? and “Did you vote for Donald Trump?”

At first, she tried to act ignorant, but the jeers and stalking continued.

“I literally said, ‘let’s move on’ and then I moved on and walked away,” she would say in a later interview.

Unfortunately, Nibo’s attempts to mitigate the situation were unsuccessful, and the protesters began hurling racial slurs at her and chanting “white lives matter.” Nibo said she gave the group the middle finger and kept on moving.

Nibo told the LA Times that she was surprised at the intensity of the protests, and recalled the peacefulness of the BLM protest she participated in last summer in Hollywood.

Despite the uncomfortably hot weather, most of the marchers were wearing face masks, a stark contrast with the group that boxed her in.

“I was like, why are you guys coming so close to me? There’s social distancing going on. Please, you need to give me my space. They did not care. They got closer,” she said.

Things quickly turned violent. Someone shoved Nibo from behind. A man knocked her phone out of her hand, scratching her face in the process.

Then, a woman reached up and grabbed her brand-new wavy mahogany wig and tore it off.

In response, Nibo said she punched that woman in the face.

As seen in a video posted after the incident, the woman who tore Nibo’s wig held a Trump flag in one hand and the wig in another, bragged: “I did that, I did the first scalping of the new civil war,” and the crowd around her erupted into cheers.

California Community Foundation receives $55 million from billionaire MacKenzie Scott
August 16th, 2022
'I Look at the World,' showcasing the migrant and Black Lives Matter struggles amid a pandemic
August 8th, 2022
Rodrigo Ribera d’Ebre: "There will always be a population that will refer to me as Latino"
July 5th, 2022

In this video from yesterday’s white supremacist rally in downtown Los Angeles, the unidentified attacker who maced the Black woman in the face is seen harassing local journalist Vishal P. Singh (@VPS_Reports).

Help us find this person. pic.twitter.com/UTbCYiZMmS

Nibo recalled feeling like this was the end for her.

“Literally, I thought that was it. I’m going to be on the front page: a young African American girl has been beaten to death on the streets of downtown L.A.,” she said.

Soon after, a sturdy man wearing a Trump 2020 shirt, grabbed Nibo from behind, immobilizing her. In photos taken by Natalicchio, a person then pepper sprayed Nibo in the face.

Social media users were quick to harangue the man, but Nibo confirmed in an interview on Thursday that Roy Ball, started whispering in her ear, “it’s ok, it’s ok, calm down,” and “I’m not going to hurt you.”

The LAPD issued a news release Thursday that Ball “appeared to have been a good Samaritan, shielding and helping the woman.”

Natalicchio said that despite the close presence of officers, none of them intervened.

“It took two bystanders to pull her out,” she tweeted.

This woman was walking home.
She lives on Hill St. , two blocks away from LA City Hall where a “Stop the Steal” Rally was taking place.
A mob of at least 20 Trump supporters circled her, beat her and maced her. It took two bystanders to pull her out. No arrests were made. pic.twitter.com/kHkFAMlf2v

Nibo is currently trying to retract her statement with CBS that Roy “saved her.” Ball was filmed earlier that same day leading several crowds that verbally and physically assaulted a woman of color as well as several photographers.

Footage shows Nibo being taken behind the police lines as her and bystanders tried to point out her assailants to the Captain. The assailants were never detained.

LAPD told Fox News that they were completely unaware that there was an incident until they saw it on social media. They have now opened an investigation, and informed Nibo that she can file paperwork to make a citizen’s arrest.

Nibo told KCAL that the incident has left her traumatized and fearing for her life as a Black woman in America.

“I don’t understand what’s going on in the world. I’m saddened by it. I’m heartbroken by it.”