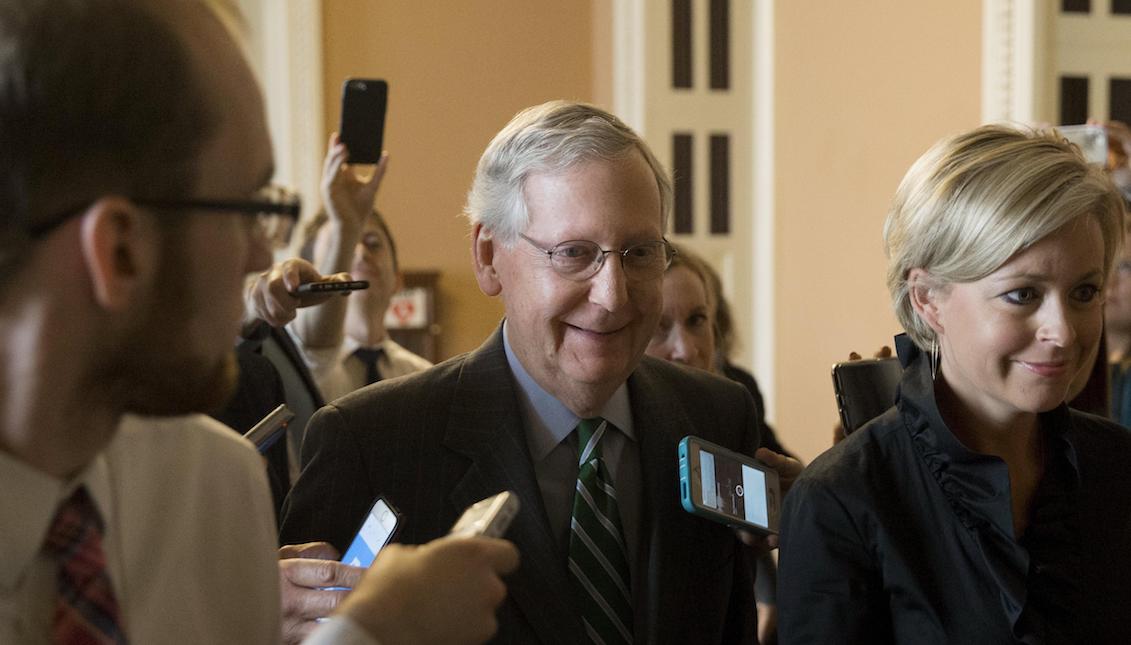 Senate Majority Leader Mitch McConnell (r) is surrounded by the press on his way to his office upon arrival at the Capitol in Washington DC, USA, today, June 22, 2017. EFE/MICHAEL REYNOLDS

At a key moment for the Republicans, in their fight against Obamacare, the party has finally made public its health project that would replace the previous…

After weeks of secret and private drafting, the Senate has released the plan of the American Health Care Act, a version of the May House bill that appears to make health care a luxury within reach of a few.

The 142-page proposal is being urged by Republican majority leader Mitch McConnell to be put to the vote next week, giving only a few days to the senators to make their decision.

Among the scheme of the new proposal is the remission of the individual mandate of Obamacare, cutting federal support for Medicaid and eliminating the taxes that raised the previous measure on the wealthy and insurance companies, a campaign that the Republicans have pursued during a long time.

The proposal also proposes to withdraw funds from Planned Parenthood and the cuts focus mainly on Medicaid and on the reform of the process to receive federal funds, including the introduction of work requirements.

However, according to NBC News, some key components of Obamacare will remain unchanged, such as protecting individuals with pre-existing conditions, and adults (up to age 26) will be able to maintain their parents' insurance coverage.

In addition, the measure will maintain the individual insurance market for tax credits based on income, thus avoiding penalties.

As for taxes on the wealthy, the income tax for those earning more than $ 250,000 a year will be revoked in 2022, but a 3% tax on investment income will be revoked retroactively.

Likewise, the proposal will maintain reduced cost payments throughout 2019, payments that will help low-income Americans obtain medical coverage in the individual market through deductibles and co-payments, which would directly affect the economy of these strata.

Another measure of the law will be to allow insurers to raise costs for people, as they get older, granting permits in some states to cover fewer services.

According to The Atlantic analysis, the new law will also increase costs on currency hedging and will be less "comprehensive" for low-income, sick and older people.

During today’s morning, the Republican senators heard the presentation of the proposal in the Capitol, in a measure of McConnell to manage to convince the dubious ones of their vote, because he can only afford to lose two votes so that the measure is approved.

Although Republican leaders have assured that some changes could still be introduced, some senators have not been happy with the outcome, including Wisconsin Republican Senator Ron Johnson.

In the same way, Senate Democratic Leader Chuck Schumer declared on the Senate floor "the way this law cuts social security is heartless. The President said that the law of the House is mean. But the Senate proposal could be worse. "

According to analysts, if passed, the new law will significantly affect health levels and economic stability of the middle and lower classes, especially for those who do not reach the minimum wage and for those with a developing clinical picture.

But the achievement of the Republicans will be the same: banish the hated Medicaid.