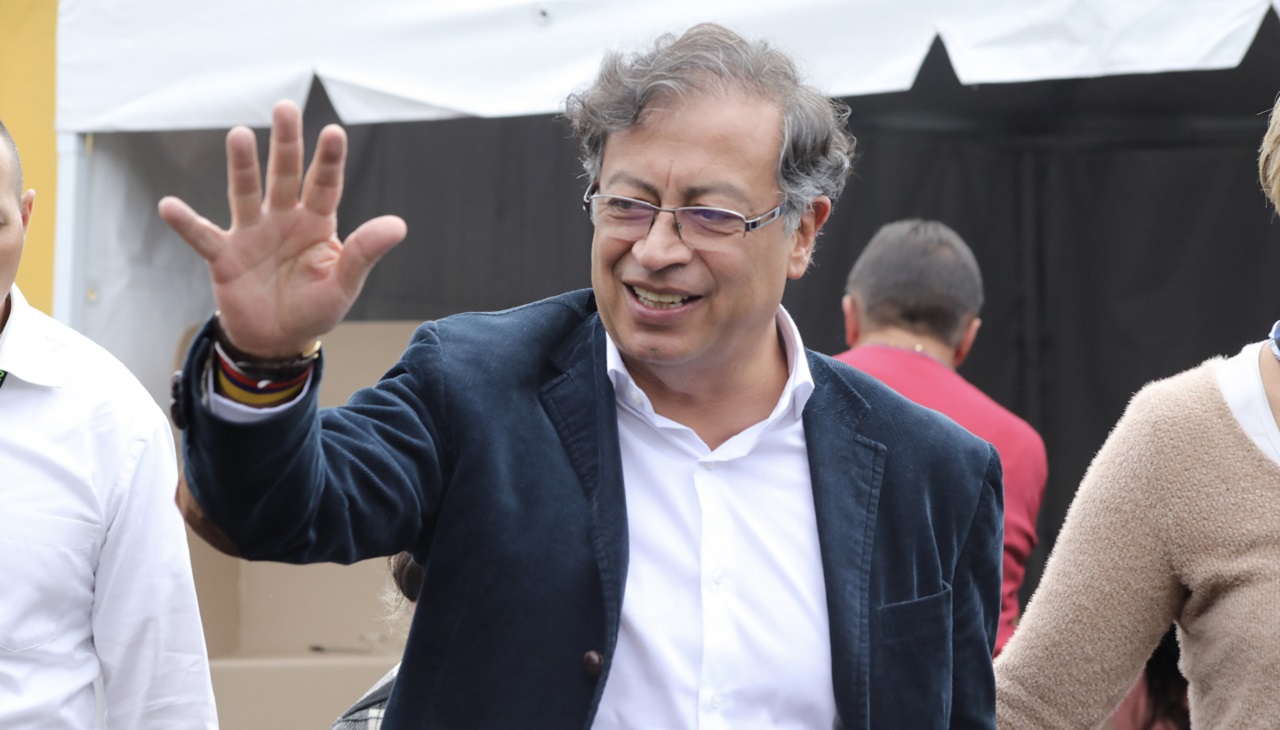 Gustavo Petro, candidate of a center-left coalition, got the most votes on Sunday, May 29. Alexa Rochi/AL DÍA

Colombia's presidential elections go to a second round

On June 19, Colombians will choose between Gustavo Petro, a center-left candidate, and Rodolfo Hernandez, a right-wing populist.

The electoral surprise of Colombia's elections on Sunday, May 29, was the final finishing place of Federico Gutiérrez, who came in third place despite the polls having him as the rival to Gustavo Petro in the second round. It was also a defeat for the administration of President Iván Duque and his party, the Democratic Center.

Another highlight was the significant increase in the number of voters, from almost 20 million in March to almost 21.5 million votes.

With 99.7% of the votes reported, these are the results by percentage:

For the next three weeks, Petro and Hernandez are expected to work hard to strike alliances with other sectors to gain support.

Hernández, former mayor of Bucaramanga, has focused his campaign on the fight against corruption. However, on July 21, a trial will begin against him for his alleged illegal awarding of a consultancy contract to implement new technologies for waste management in a sanitary landfill when he was mayor. In May of last year, he was formally accused and called to trial.

In recent weeks, he did not attend any of the radio and television debates. His campaign has focused on social media outreach and analysts have described him as the 'Colombian Trump.'

On the night of May 29, Gutiérrez acknowledged his defeat and announced his support for Hernández. With it, is the support of the governing party, led by former president Alvaro Uribe.

Meanwhile, Petro, the winner of the day, was the last to speak on the results of the first electoral round.

"Today is a day of triumph," Petro said at the beginning of his speech in the hall of a hotel in downtown Bogotá, with more than 1,000 attendees, including 400 national and international journalists.

Petro is a former mayor of Bogotá, the capital, and one of the most prominent senators in the Colombian Congress. In the 1980s, he was a member of the M-19 guerrillas, a non-Marxist, left-wing, armed organization that signed a peace agreement in 1990. As part of that negotiation, a Constituent Assembly was convened in 1991, which reformed the Constitution.

Throughout the day, more than 500 cases of electoral pressure and vote buying and selling were reported in some regions of the country. Polling stations opened at 8:00 a.m. and closed at 4:00 p.m.

TAGS
kican25954
Making money online more than $15k just by doing simple work from home. I have received $18376 last month. Its an easy and simple job to do and its earnings are much better than regular office job and even a little child can do this and earns money. Everybody must try this job by just use the info on this page.

Open The Link----------->>> 𝐖­­𝐰­­𝐰­­.𝐖­­𝐨­­𝐫­­𝐤­­𝐒­­𝐢­­𝐭­­𝐞­­𝟐­­𝟒.𝐂­­𝐨­­𝐦
soticid364
I’m making over $17k a month working part time. I kept hearing other people tell me how much money they can make online so I decided to look into it. Well, it was all true.
This is where i started… 𝐰𝐰𝐰.𝐡𝐦𝐣𝐨𝐛𝐳.𝐜𝐨𝐦
dojine9995
[ STAY AT HOME & WORK AT HOME ] Start making money this time... Spend more time with your family&relative by doing jobs that only require for you to have a computer and an internet access and you can have that at your home. Start bringing up to $65o to $7oo a month. I've started this job and earn handsome income and now i am exchange it with you, so you can do it too. You can check it out here........🙂 AND GOOD LUCK.:)
𝐖𝐰𝐰.𝐢𝐧𝐜𝐨𝐦𝐞𝐬𝐛𝐨𝐨𝐬𝐭.𝐜𝐨𝐦
ribapi3115
My last paycheck was $2500 for working 12 hours a week online. My sisters friend has been averaging 8k for months now and she works about 30 hours a week. I can't believe how easy it was once I tried it out. The potential with this is endless. This is what I do....

Open The Link———–>>> 𝘄𝘄𝘄.𝗡𝗲𝘁𝗖𝗮𝘀𝗵𝟭.𝗖𝗼𝗺
xofevo4036
I've made $64,000 so far this year working online and I'm a full time student. Im using an online business opportunity I heard about and I've made such great money. It's really user friendly and I'm just so happy that I found out about it. Heres what I do.
:) AND GOOD LUCK.:)


𝐇𝐄𝐑𝐄► 𝐡𝐭𝐭𝐩𝐬://𝐰𝐰𝐰.𝐜𝐚𝐬𝐡.𝐬𝐤𝐲𝐟𝐥𝐲𝟖.𝐜𝐨𝐦
tobey19591
I’m making over $7k a month working part time. I kept hearing other people tell me how much money they can make online so I decided to look into it. Well, it was all true and has totally changed my life. This is where i started ….
HERE ► 𝐰𝐰𝐰.𝐜𝐚𝐬𝐡.𝐬𝐤𝐲𝐟𝐥𝐲𝟖.𝐜𝐨𝐦
daweci9387
These are 2 pay checks $78367 and $87367. that I received in last 2 months. I am very happy that I can make thousands in my part time and now I am enjoying my life. Want To Work From Home Without Selling Anything? No Experience Needed, Weekly Payments... Join The Exclusive Group Of People That Cracked The Code Of Financial Freedom! Learn More details..
:) AND GOOD LUCK.:)
HERE====)> 𝐖𝐰𝐰.𝐇𝐨𝐦𝐳𝐣𝐨𝐛.𝐂𝐨𝐦
nekoho1687
I've made $64,000 so far this year working online and I'm a full time student. Im using an online business opportunity I heard about and I've made such great money. It's really user friendly and I'm just so happy that I found out about it. Heres what I do.
:) AND GOOD LUCK.:)