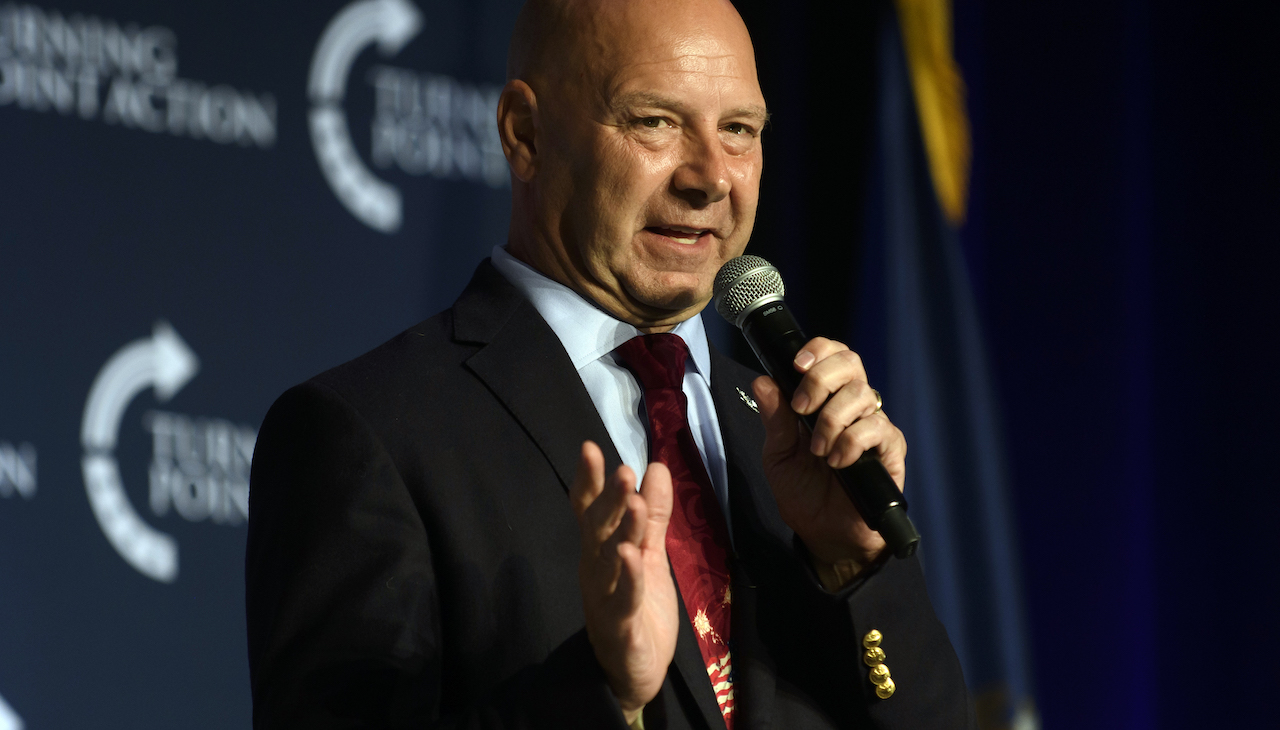 A worker at the time for the Army War College, Mastriano is seen wearing a Confederate uniform in a faculty photo dated 2013-2014.

Doug Mastriano, Pennsylvania’s Republican gubernatorial candidate, is facing some new turmoil as the November elections loom closer. An old photo of Mastriano, which Reuters obtained under a Freedom of Information Act request, resurfaced on Friday, Aug. 26, showing the GOP candidate posing in a Confederate uniform during his time on staff at the U.S. Army War College (AWC) in Carlisle, Pennsylvania.

The photo, dated from 2013-2014, is a faculty photo of when Mastriano was part of the Department of Military Strategy, Plans and Operations. It’s a little over three years before he would retire in 2017 after serving over three decades in the military.

Per Reuters, the faculty was given the option of dressing up as an historical figure, and the photo shows a few others in costume and the rest in regular clothing. Mastriano is the only one posing in a Confederate uniform, which for many represents the hate, slavery, and Southern culture during the time of the Civil War.

AWC said in a statement to Reuters that a team back in 2020 had reviewed all text, photos, and art pieces publicly on display to see which of those did not align with the college’s educational philosophies and army values.

“The faculty photo did not get the team’s attention; the photo has since been removed because it did not meet AWC values,” the college said to Reuters after they reached out for comment.

Mastriano has been embroiled in much controversy during his run and time in office as a state senator.

The gubernatorial candidate is also an election denier, who back in 2020 was involved with other Republicans across the country questioning the legitimacy of the 2020 presidential election that saw former President Donald Trump lose to President Joe Biden. He spread election lies and was a key component in Pennsylvania in Trump’s efforts to overturn the result. He was also in the crowd during the Jan. 6 attacks on the U.S. capitol.

“Doug Mastriano wore the uniform of traitors who fought to defend slavery on official grounds of the U.S. Army War College—The College condemned him, saying this ‘does not reflect our values.’ It’s deeply offensive and proves who he is, once again. He’s unfit to be governor,” Shapiro wrote in a tweet on Friday, Aug. 26.

Pennsylvania is seen as a key swing state that plays a huge role in the U.S. presidential elections and any further controversy would only lower Mastriano’s chances of being elected in November, as he currently trails Shapiro in recent governor's polls.

In addition to this, it is unclear as of now how this will impact his votes in Pennsylvania as the state fought for the union against the Confederate South in the Civil War, losing over 33,000 soldiers. Pennsylvania was also the site of the war’s most famous and bloodiest battle, Gettysburg, which is included in Mastriano’s senate district.

Mastriano’s decision to wear the uniform was defended by some on the right.

“And? He has a Ph.D in HISTORY. The left wants to erase history. @dougmastriano wants us to learn from it. I invite @Reuters to go on a Gettysburg tour with Doug. You’ll learn a lot!” she wrote.

Other shows of support came from other state Republicans, including Lee Snover, chair of the Republican party in Northampton County.

“It happened years ago. There was something called the Civil War and that included Confederate soldiers. So not sure what the big deal is,” Snover said.

Shapiro and Democrats alike will add this to their arsenal as Shapiro looks to take the governor’s seat in the upcoming elections. With the Presidential elections also around the corner, whoever wins the governor’s race in November will have the authority to appoint the PA Secretary of State, who is in charge of running the state’s election and approving of its electors.