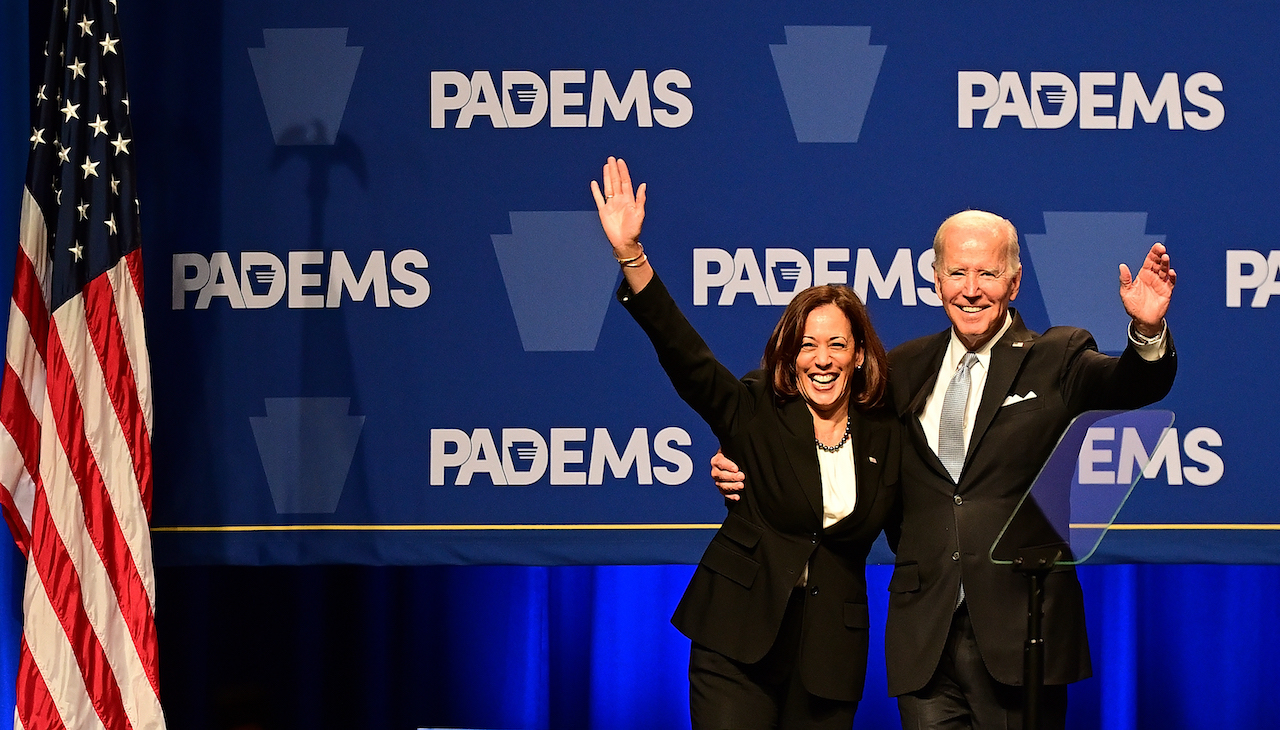 The President and Vice President were in town on Friday, Oct. 28 to boost the Democratic Party's efforts in what will likely be home to its most consequential races. Photo: Mark Makela/Getty Images.

The President and Vice President were in town at the 3rd annual Independence Dinner in an attempt to galvanize the base in a state with vital races in November.

It was a boisterous, and spirited atmosphere at the PA Democratic Party’s 3rd Annual Independence Dinner in Philadelphia on Friday night, Oct. 28. In addition to the political summit, it was also Game 1 of the World Series between the Phillies and Astros, and President Joe Biden and Vice President Kamala Harris made a rare joint appearance and headlined the annual fundraiser held at the Pennsylvania Convention Center in the heart of the city.

The two delivered impassioned keynote addresses to the animated crowd to help boost their fellow Democrats who are on the ballot this Election Day, Nov. 8, in Pennsylvania.

This is the Pennsylvania Democratic Party’s biggest fundraising event of the year, and was expected to raise over $1 million.

Harris was focused on the upcoming elections that are expected to be one the more contentious, and critical midterm elections in recent time. She touted Biden’s long record in office as a reason to support the party heading to election season’s climax.

“Joe Biden has always stood for what we stand for as Democrats, working people, good jobs at fair wages, decency, and democracy,” said Harris. “When you know what you stand for, you know what to fight for. We've got 11 days to get it done.”

Harris also outlined what is at stake on Nov. 8, which includes a women’s right to an abortion, gun control, and other rights that Republicans are looking to strike down. The VP illustrated a future with Republican rule.

“Imagine if we lost the governor's office in Harrisburg and our majorities? Imagine if we lost that and our majorities in the House in the Senate? That would mean that big lies and extremism would rule the day. We know what follows,” she said, before a pointed call out of Supreme Court Justice Clarence Thomas. “Thomas said the quiet part out loud. Contraception, marriage equality, health care is on the line, Social Security, and Medicare will be on the line. Good jobs and fair wages for working families on the line.”

But beyond the doom and gloom, Harris ended on a brighter note of the realities that can be if Democrats win in the upcoming midterms. She painted a realistic picture of Democrats being able to hold the governor’s office, as well as electing two more Democratic senators.

“We can then protect and build on our progress. Pennsylvania Democrats, we know what we stand for so we know what to fight for. Here in this beautiful place that first defined the meaning of freedom and liberty. We have 11 days to fight like we have never fought before,” Harris ended.

Biden was met by the crowd with a rockstar-like introduction and roaring applause. His nearly half-hour speech also occurred as the first pitch in the Phillies game happened, but he was sure to flash his Phillies socks at one point..

The President touched on many topics, which included some of his administration’s biggest achievements in recent months such as bringing the price of gas down, growing the economy, and tackling inflation. He also went at some of his predecessor’s failures during his time in office and used it to explain how much better the state of the country has been under the Biden-Harris administration.

“When I took office, this economy was in ruins. My predecessor was the first president since Herbert Hoover to lose jobs during his four-year presidency. The unemployment rate was 6.4%. Hundreds of thousands of small businesses closed. Today, we're in a much better place and we have more to do,” Biden said.

Much in the same vein as his VP, Biden spoke on the stakes that the American people face in the midterm elections. He said that “democracy” is on the ballot, something many Democratic politicians have said ahead of Election Day, and that the elections were "not a referendum.”

“It's a choice, a choice between two vastly different visions of America," he said.

Biden went on to talk about some of the scenarios that await the American people with Republican rule and control. It started with abortion.

"If Republicans gain control of Congress and pass a national ban on abortion, I will veto it. But if we elect to the Senate, two more Democrats and keep control of the house, we're going to codify Roe v. Wade in January so it's the law of the land," Biden said.

The President also boosted Pennsylvania’s Democratic candidates that are on the ballot in Attorney General and Gubernatorial candidate Josh Shapiro, and Lt. Gov. and U.S. Senate candidate John Fetterman. He started with the latter.

“John leaves nobody behind. He’s keeping communities safe, and protecting your rights. John has enormous integrity,” said Biden. “You know who he is, you know where he stands. John is Pennsylvania.”

Biden had equal words of encouragement, and affection for the gubernatorial candidate, Shapiro.

“As Attorney General, he took on Big Pharma that was fueling the opioid crisis in 2020. He took on the big law and went to court justices time to stand up for the people's defense, manage and protect your right to vote. His cabinet is protecting democracy. We need to vote for Democrats up and down this ballot,” he said.

Biden ended his speech with a very optimistic tone, just as he first entered the night’s event.

“We’re just getting started. I’ve never been more optimistic about America’s future. We just have to remember who in god’s name we are, the United States of America! There’s nothing, nothing beyond our capacity if we work to do this, so vote, vote, vote! Go Phillies!”