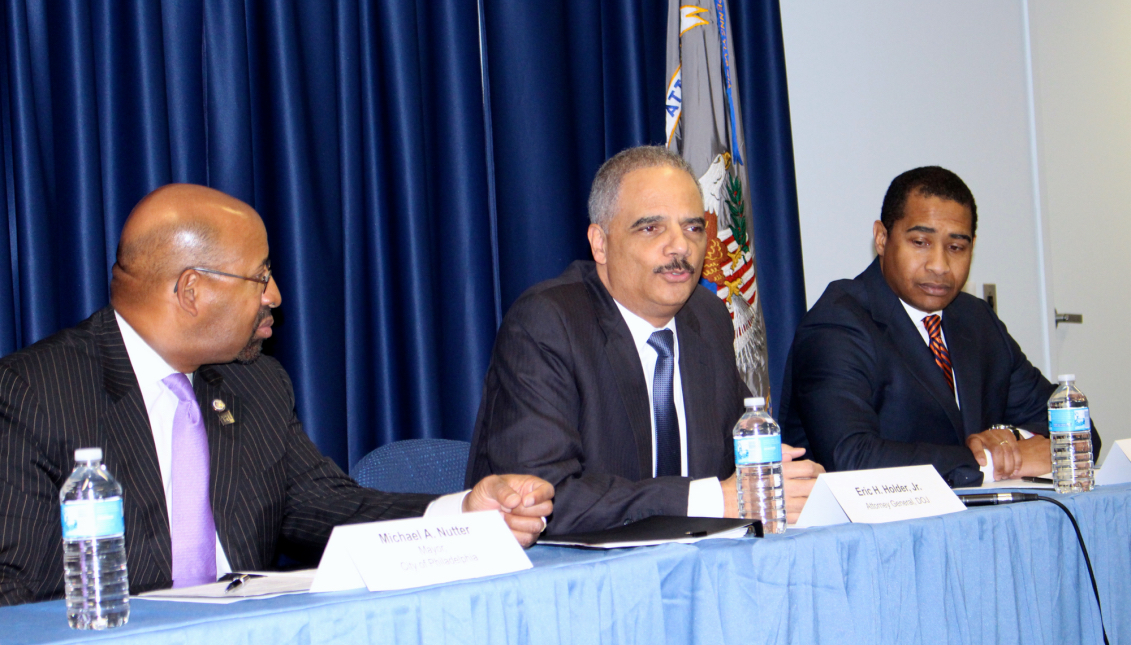 In Philly talking about police and community excludes Latinos

U.S. General Attorney Eric Holder visited Philadelphia Thursday to hold a roundtable on building trust between law enforcement and the communities they serve,…

U.S. General Attorney Eric Holder visited Philadelphia Thursday to hold a roundtable on building trust between law enforcement and the communities they serve, yet the lack of Latino representation raises the question of whether there is any interest in building trust with this community.

Philadelphia Mayor Michael Nutter, Police Commissioner Charles Ramsey —co-chairman of a task force created by Obama to build public trust— and U.S. Attorney for the Eastern District of Pennsylvania, Zane David Memeger, were all there sitting next to Holder in front of the panel.

The roundtable was meant to serve as an opportunity to bring law enforcement, elected officials and members of the community together to discuss the next steps that the Obama administration will take to improve relationships between law enforcement and the community.

When I noticed that among the 22 panelists there wasn’t a single Latino, I asked an aide of the Department of Justice about it. At first she didn’t have an answer. Later on she showed me an email as proof that Congreso’s Chief Communications Officer, Yvette Nuñez, had been invited to participate.

Although the roundtable with Holder in Philadelphia is part of an effort in response to tragic incidents related to the African-American community, like the death of teenager Michael Brown in Ferguson and Eric Garner in Staten Island, there have also been instances of tension between members of the Latino community in Philadelphia and local police, among them, the case of an officer who was recorded in video punching a Latina woman during the celebration after the Puerto Rican parade; police tossing Dominican bodegas in North Philly, and the mistrust of the Latino immigrant community due to city's Preliminary Arraignment Reporting System (PARS) which allowed for the sharing of information with federal immigration agencies — this last was lessened in 2014 after Mayor Nutter signed an executive order.

Additionally, the Philadelphia Inquirer reported that in Philadelphia police have fatally shot 54 people in the past five years, according to records maintained by Pennsylvania state police. Of that group, demographic information was available for 52.

“Three out of four were African American. An additional 18 percent of the suspects were Hispanic. Two-thirds of the officers involved were white”, reported the Inquirer.
When asked about the lack of Latino representation in the roundtable with Holder, Nutter said “I’m not the person who decided who was sitting at the table. (...) I did not check everyone’s ethnic heritage.”

Call it a case of name profiling, but when you see the list of panelists who participated in the roundtable it’s pretty obvious that none of the Latino organizations in the city were represented.

He’s held similar roundtable discussions in Atlanta, Cleveland, Memphis, and Chicago, and the next one will take place in Oakland in the coming weeks.

As we are waiting to confirm the list of panelists in other cities, and to hear a comment from the Department of Justice, there is no doubt that when it comes to the Latino community in Philadelphia, this was a missed opportunity.