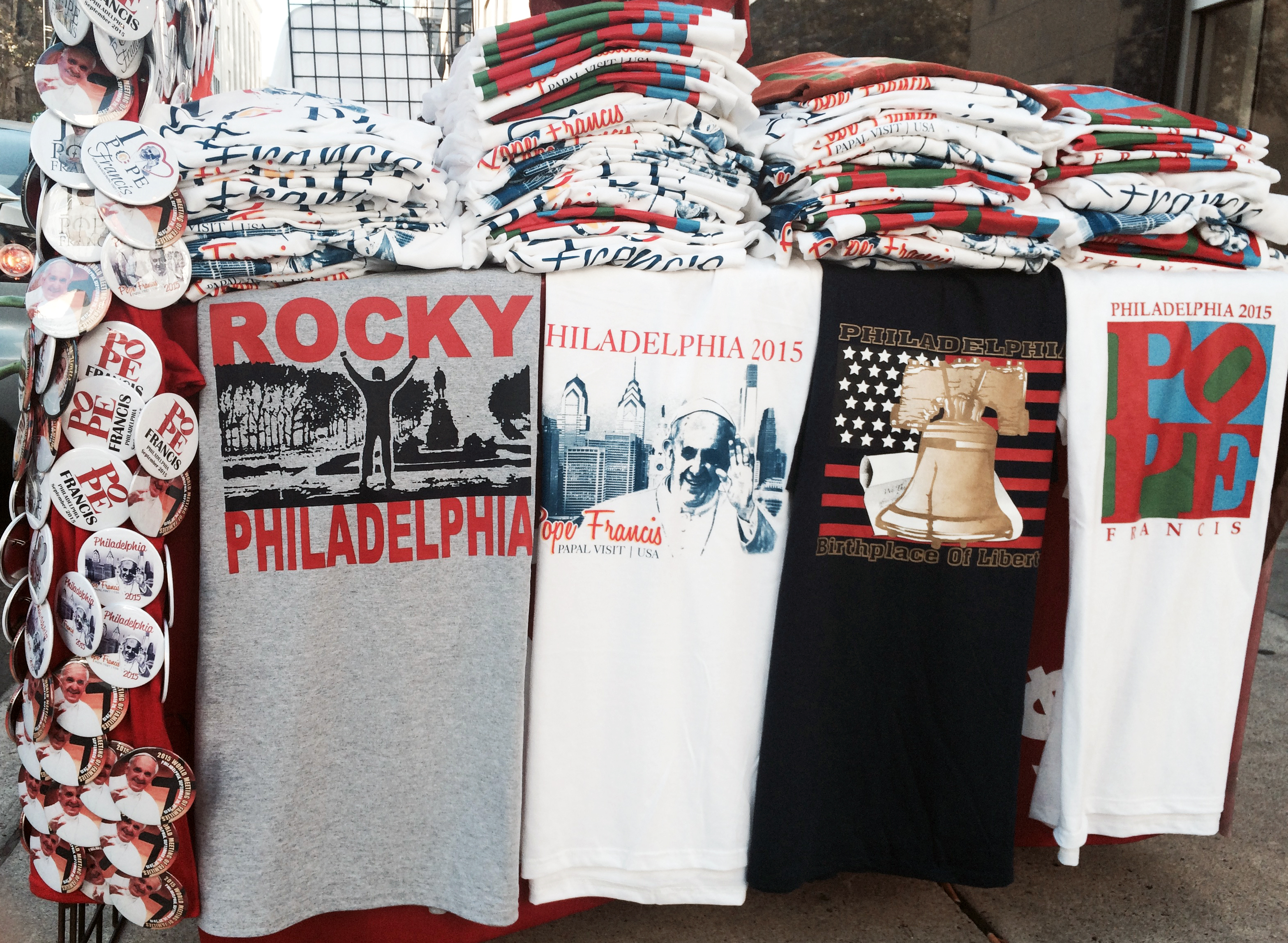 Street vendors who ordered Pope merchandise over two months ago were given just days' notice that they won't be allowed to sell their wares downtown this weekend. Photo: Max Marin / AL DÍA News

“We are your regular little vendors that’s been here forever."

Khan, a halal food cart owner who works 52 weekends a year, estimates that he’s going to be out at least $2,000 in a few days.

He is one of the dozens of perennial, license-holding street vendors in Center City to recently receive this notice from the city, which bans vendors from operating at their usual locations Friday through Monday for the Pope’s visit.

The prevailing message since August has been that vendors with valid licenses could operate inside the traffic box, according to the Department of Commerce. They just couldn’t drive their vehicles in and out. But things have changed. Now only the Aramark-approved vendors will be allowed to operate within the security zone.

“Messed up,” “sheisty,” and “unfair” were how some described their last-minute displacement.

Some have resigned themselves to a profitless four-day weekend at home. But at the very least, each of the dozen or so vendors AL DÍA spoke with on Wednesday were furious over “the principle of the matter.”

“I’m upset because they didn’t give the option to the person who works here 365 days,” said Chris, a licensed food cart owner located near City Hall. Most of the vendors did not want to use their last or real names, fearing retaliation from the Department of Licenses and Inspections (L&I).

Others — again, like Khan — stand to lose a lot of money. And injunction or not, they plan to find a way to be downtown this weekend.

Jay has a table full of Pope Francis merchandise on 15th Street. He belongs to a four-generation family of street vendors, and has himself been in the business for 13 years. Anticipating the demand, Jay made wholesale orders for graphic Pope Francis t-shirts, World Meeting of Families buttons, and other memorabilia well over two months ago.

Working outside the traffic box as L&I suggests, he won’t sell nearly as much merchandise, he says, and could even end up in the red.

L&I officials hand-delivered the notice to Khan, Jay, Chris, and other street vendors just over a week before the Pope’s visit. According to vendor accounts, an L&I inspector came, checked their vendor licenses, and made them sign a waiver confirming they received the notice and would not attempt to bring their business to Center City this weekend.

“The funny part is, they [L&I agents] came around last week to everybody around here,” Jay said. He received his notice on Friday, as did Chris’ breakfast-and-lunch cart. “But we also have another stand on 10th and Market that’s been there since before the Gallery was built. They just gave her a notice yesterday because they knew she was gonna fight it.”

Head on down to 10th and Market and you’ll find LaVerne McNear.

“They knew I was going to fight it,” McNear said, confirming that she just received the L&I flier on Tuesday, four days before the Pope’s arrival.

McNear, the first woman and African-American vendor, has been part of the fabric of Center City since the 1960s, when she “started vending with just a dollar and a milk crate in the subway.” She has sold everything from handmade wares to one-time event merch from her location at 10th and Market. She’s fought turf battles and shut-downs in her many years on the corner, but never has she seen anything like this.

For McNear, it’s not a question of how much money she stands to make or not make.

“We are your regular little vendors that’s been here forever — rain, snow, sleet, hail and storm,” McNear said. “Y’all sell to outside vendors, and tell us we can’t work. And they’re not even from Philadelphia. That’s not right.”

On Tuesday, former State Sen. T. Milton Street and City Councilman Mark Squilla held a consulting session for the vendors in hopes of finding some recourse. But with such short notice, it seems there is no time to contest the ruling. Neither Street nor Squilla could readily comment in time for this article. But according to the councilman's office, Street sent out an email saying that there was not enough time to pursue further action against the city.

The situation brings back bad memories for McNear, who has often fought for her right to her livelihood and her location.

“I didn’t even know I was a vendor until 1973,” McNear said. “Under the Frank Rizzo administration, anybody who look like my beautiful color and didn’t have a license, you were going to jail.”