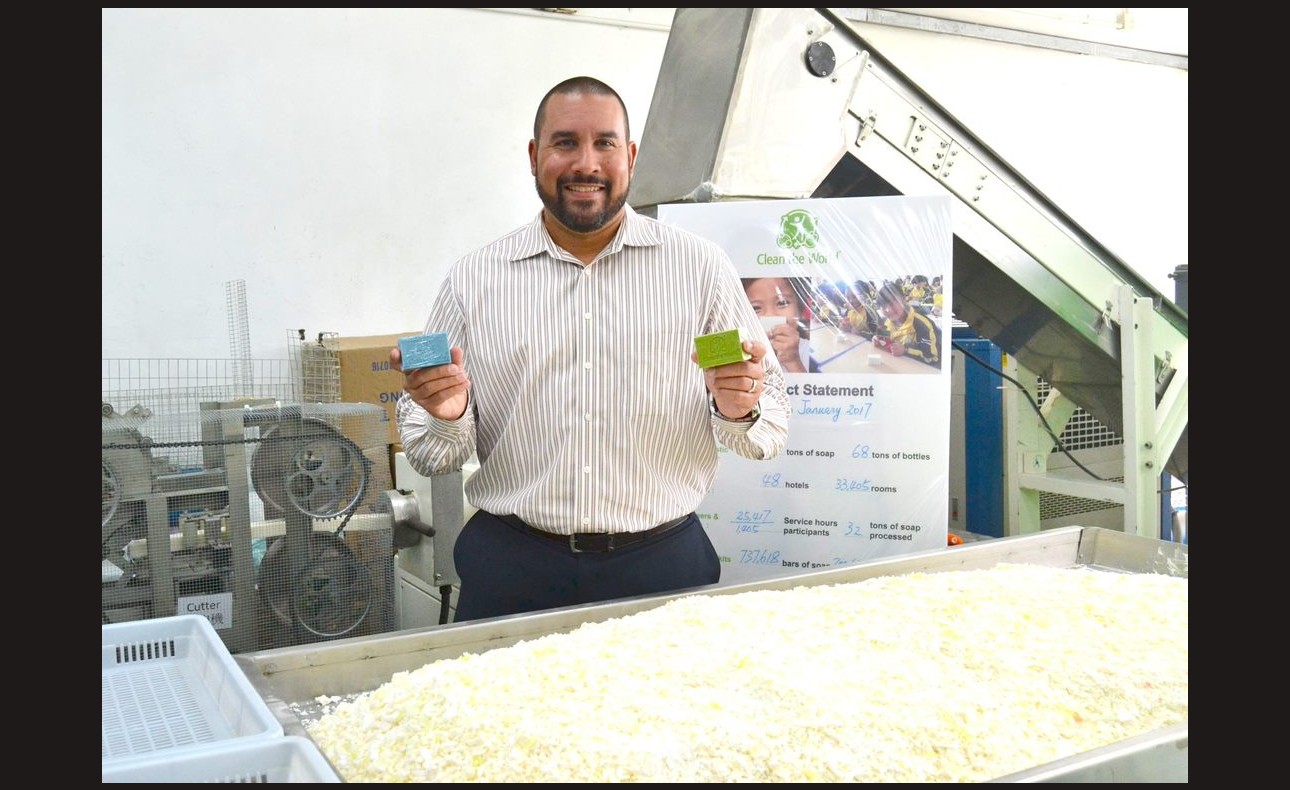 Where do hotel soap bars end up?

Shawn Seipler, an Orlando entrepreneur with Puerto Rican roots, is the founder of Clean the World, dedicated to recycling used hotel soap for those in need.

Thirteen years ago, Shawn Seipler was happily living with his wife and four children in Orlando, owning two homes and making a good living as vice president of a multinational technology company, a job that required him to travel four or more days a week to cities in the northern United States.

“I’m originally from South Florida, so I have very thin South Floridian blood, so whenever I'd go to Minneapolis to visit Best Buy and Target, which were my two biggest customers, I would always come back to my hotel room, bundle up, and usually drink a cocktail at the end of the day,” explained the 46-year-old businessman with Puerto Rican roots in an email.

On one of those nights, he found himself wondering: “What happens to the little bar of soap and little bottle of shampoo whenever I leave?”

“My typical trips would be something like New York on Monday, Chicago on Tuesday, and Minneapolis on Wednesday. As I traveled from city to city, I'd never take the little bar of soap or the little bottle of shampoo with me,” he wrote.

Moved by curiosity, he called the hotel front desk and threw the question to the receptionist. The receptionist, who already knew him from other trips, encouraged him to have another cocktail and forget about it. But Seipler insisted, and the woman had to tell him the truth — they were all thrown away.

That same night, from his Minneapolis hotel room, Seipler began to do his research and calculations.

Considering that in 2009 in the United States there were 4.6 million hotel rooms with an average occupancy rate of 60%, it meant that about 1 million bars of soap were being thrown away every single day in his country alone. The figure seemed so exorbitant to him that he set about investigating whether there was a way to recycle all these bars of soap. The answer was to melt them down and turn them into a new bar. Now, he just had to figure out what he could do with all those recycled bars of soap. He found the answer on the Internet — in 2009, about 9,000 children under the age of five died every day from pneumonia or diarrhea, two diseases that could stop being fatal if those children had access to a bar of soap and learned how to wash their hands.

"All I have to do is figure out how to get recycled soap into the hands of these kids," Seipler thought to himself from his Minneapolis hotel room.

A few weeks later, he founded Clean the World, a Florida-based organization dedicated to recycling and distributing soap collected from hotels to save lives around the world.

“I'm half German and half Puerto Rican, so I called my German family members and said, 'I’ve got this great idea. We're going to start collecting soap from hotels and we're going to recycle it and send it all over the world,'" he said.

“Well, I decided to call my Puerto Rican family members and I said: 'Listen, I’ve got a really good idea. Why don't we start cooking soap so we can save children's lives around the world?' They said they were in, so we started calling hotels around Orlando, Florida, and asked them to give us their soap," said Seipler

The center of operations was his cousin's garage — that's where they stored the used bars of soap, which they then scraped with a potato peeler and ground up in a meat grinder. The next step was to boil them in slow cookers until they had a dough that would fill the molds of the new bar of soap.

“It would take us 24 hours to make 500 bars of soap,”  the entrepreneur recalled through email.

Well, I decided to call my Puerto Rican family members to tell them my idea, and they said they were in.

Helping immigrants at the border

Thirteen years later, Clean the World has donated nearly 70 million recycled bars of soap and is present in 127 countries, notably the Philippines, Zambia, the United States, Haiti, and Honduras. Seipler's mission remains the same — to save children's lives through improved hygiene — although in recent years, it has expanded its service program to reach out to other vulnerable communities, from those affected by natural disasters or conflict, to the homeless.

"COVID-19 changed how the world views hygiene. Clean the World’s mission is more important than ever, and our hotel partners are showing us how valuable it is by continuing to add new hotels to our hospitality recycling program and increasing the amount of soap they collect and send in to be recycled," he said.

In addition to distributing recycled soaps and offering other services such as mobile showers and educational workshops on personal hygiene, Clean the World, which is part of the United Nations World WASH Group, is on the front line when it comes to helping during humanitarian disasters. Over the past few years, the NGO has distributed soap to Syrian and Somali refugees and cared for dozens of Latin American immigrants stranded at the U.S.-Mexico border. They are currently working on a project to distribute 200,000 hygiene kits — soap, toothbrush and toothpaste — in Ukraine and the border countries of Poland and Romania, where hundreds of thousands of Ukrainian refugees are fleeing their country because of the Russian invasion.

"We plan to open operations in Australia, China and the Middle East in the coming years,” he explained. “We are also working on social micro-enterprising programming across Africa and Latin America, so that we can create Clean the World program operators in areas where the need is in the immediate region, so used soap will be collected, re-manufactured and distributed all within a very close proximity.”

As for the public, the organization is planning a “cool way” for a hotel guest to “Track their bar of Soap” after use, as well as exploring additional products that we can create out of recycled plastic.

However, Seipler never forgets the mission that led him to create Clean the World — to contribute to the task of reducing the mortality rate of children under 5 years of age due to diseases related to lack of hygiene. According to figures provided by the NGO, from 2009 to 2020 the rate decreased by 65%.