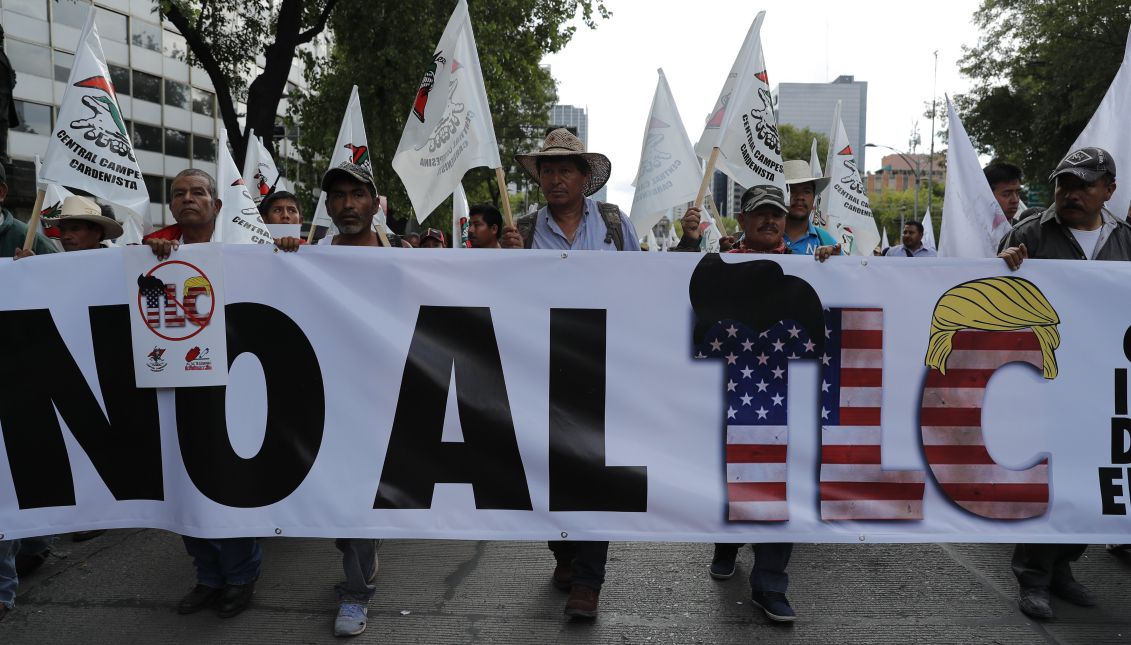 Civil organizations demonstrate to protest the start of NAFTA renegotiations, in the streets of Mexico City, Mexico, 16 August 2017. EPA/Jose Mendez

Mexicans Protest Against NAFTA talks, as Their Government Fights to Save It

While Mexican government negotiators fight to save the North American Free Trade Agreement during talks in Washington, thousands of members of social and trade…

A few hours after Mexico, the United States and Canada began the first round of renegotiation of the North American Free Trade Agreement (NAFTA) treaty in Washington DC,  hundreds of protesters gathered around the Angel of Independence Monument in central Mexico City and marched nearly three kilometers towards the Ministry of Foreign Affairs.

The protesters were mainly members of social and trade unions, which claim the deal marginalizes local farmers and hurts the country.

During the march, the unions, which joined together under the slogan "Mexico Better Without NAFTA", held posters saying "The NAFTA Hurts You".

Several trade union leaders took the occasion to criticize issues concerning the treaty, which was meant to be signed for the benefit of Mexicans, such as the loss of purchasing power of local workers, the import of food products and seeds from the US and the loss of Mexican sovereignty.

As the march concluded, the protesters read a manifesto, which was later delivered to the Ministry of Foreign Affairs, stating that the government did not have enough social support to renegotiate the NAFTA.

Meanwhile, in Washington, the United States's trade representative hailed the North American Free Trade Agreement renegotiation process as historic, saying the US, Mexico and Canada all agreed on the need to modernize the accord.

Robert Lighthizer made his remarks in a press conference at the start of the inaugural round of talks, which will run through Sunday in Washington.

US President Donald Trump has slammed NAFTA, which took effect in 1994, as detrimental to American interests and pledged to withdraw the US from the deal unless it can be revised.

Trump says the agreement has led to massive US job losses, provided incentives for companies to relocate their operations to Mexico in search of cheaper labor and caused the US's trade deficit with its southern neighbor to soar.

In his remarks, Lighthizer said a reduction in the trade gap with Mexico was one of the US government's priorities in the NAFTA renegotiations.

Guajardo, for his part, said the deal had been successful but could still be further improved, adding that the three parties were looking to renew their North American alliance.

"The process we begin today is not about going back to the past; it is looking into the future. The issue is not tearing apart what has worked, but rather how we can make it work better," he said.

Guajardo also quoted Lighthizer's remarks before the House of Representatives' Committee on Ways and Means a couple of months ago, when he said the US negotiators' goals in the renegotiation process were to have more trade not less and to do no harm.

"For a deal to be successful, it has to work for all parties involved; otherwise it's not a deal. Mexico is committed to obtaining a win-win-win for all three countries," the economy secretary said.

For her part, Freeland said that Canada did not use trade surpluses or deficits as a primary yardstick for determining NAFTA's success or failure.