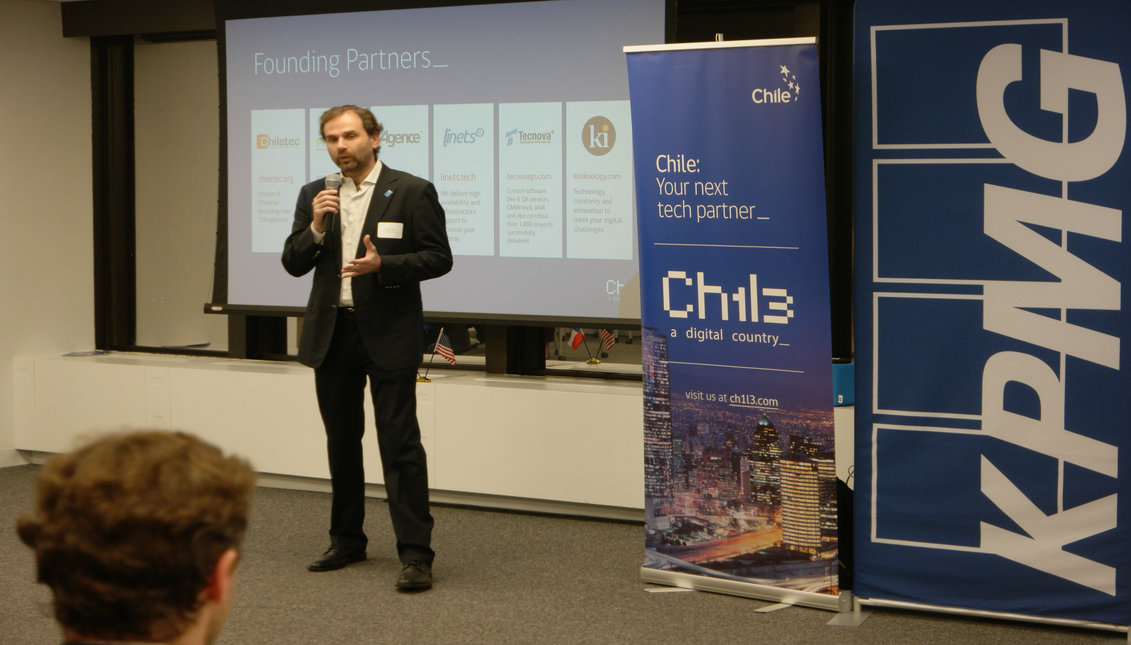 With a new brand, a delgation of Chilean tech companies aims to expand services in the Philadelphia region and beyond.

When you think of Chile, do you envision a booming hub for innovative technologies and entrepreneurship?

Probably not, but a delegation comprised of select tech companies representing the southernmost country in Latin America is working to change that perception.

Chile already has a strong trade relationship with the U.S., but this relationship is largely based on raw materials such as fruit. The delegation aims to expand the service trade between the two nations, specifically in the IT sector.

On Monday evening, the group unveiled its new brand, Ch1l3: a digital country_, to about 50 members of Philadelphia’s business community. The event was hosted by the Chilean and American Chamber of Commerce of Greater Philadelphia at the offices of KPMG.

The Ch1l3 delegation is comprised of representatives from Chilean companies specializing in fields like custom software development and digital platform development, such as Tecnova, Linets, Ki Teknology and Agence, as well as non-profit association Chiletec and ProChile, an institution of the Ministry of Foreign Affairs.

The group presented a strong case for Chile as a potential digital trade partner, highlighting the nation’s capabilities:

Benjamin Leavenworth, the honorary consul of Chile in Philadelphia, commended the country for having the most free trade agreements in the world, giving the nation access to 80 percent of the earth's population. He also noted that Chile is part of the Pacific Alliance, a trade bloc which also includes Mexico, Peru and Columbia. With more than 200 million inhabitants, this collection of nations comprises the eighth largest economic region in the world.

The delegation presented its brand in New York earlier this month, and will do the same in San Francisco later this week. Philadelphia's growing tech community and renowned universities for innovation are among the reasons why the delegation chose to present its brand in Philadelphia, said Martín Lewit, CEO of Ki Teknology.