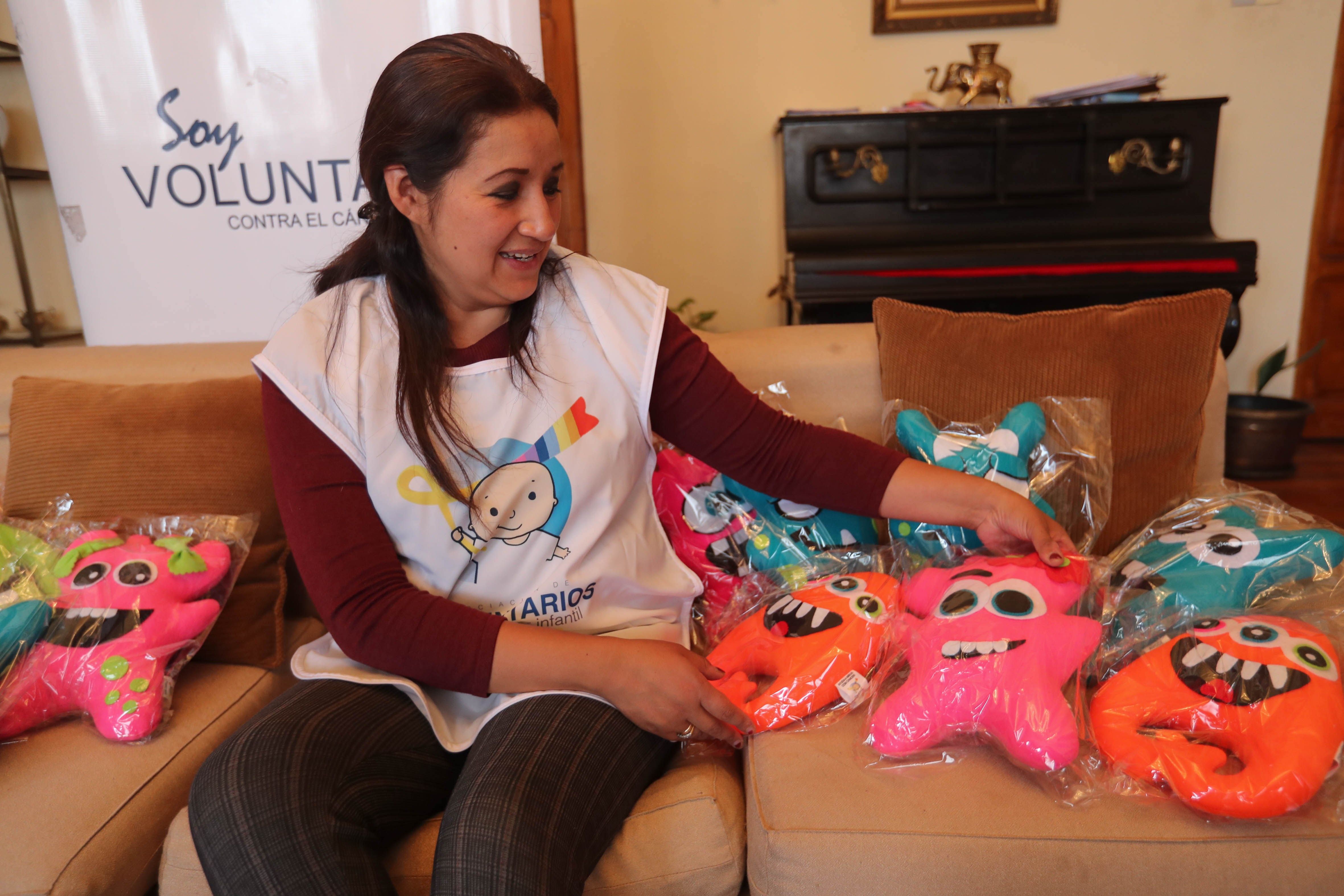 Ana Carola Torres, president of Bolivia's Association of Volunteers against Childhood Cancer (AVCCI), is seen on Nov. 15, 2018 presenting at an interview with EFE the kind of dolls used in the association's "Conquering Monsters" project to aid childhood…

These dolls are part of the "Conquering Monsters" project, which generates extra income and helps create a positive motivation for the families.

Big wide eyes, friendly smiles and flashy colors characterize the monsters invented by childhood cancer patients in Bolivia and produced by their parents in order to have some extra income to pay for the family's medical costs and keep fighting the disease.

These dolls are part of the "Conquering Monsters" project launched by the Association of Volunteers against Childhood Cancer (AVCCI), its president, Ana Carola Torres, told EFE.

Volunteer parents, children and young people "got the idea to create something that would fight the disease, but in a more positive way," Torres said.

"The kids who make up part of our association said 'we want to beat the cancer monster with a happy monster that makes it feel bad and tells it to get out of our lives,'" she said.

The little ones dream up the dolls' faces and draw their ideas on paper with the help of the volunteers.

A group that has the right machines produces the monster bodies, after which the parents and children give faces to the dolls made of felt and stuffed with fibers.

According to Torres, each monster "reflects what every child feels," since "many are afraid, but at the same time they want to fight" the cancer "with something cheerful and fun."

"Cancer is a very tough, very long and very sad disease. It's something that destroys many families, and we believed that creating this kind of positive activity would make them feel more motivated to keep on fighting," she said.

The monsters are made to order and are sold at a price equivalent to $10, of which part covers "the production costs" and the rest goes to each family, which uses the money "for what they find necessary."

Torres noted that this is a source of income "apart from the aid" that the association provides to cover medical expenses, urgent care, complementary medical exams, in some cases chemotherapy and radiation, and which it finances through other enterprises.

Many parents of children with cancer have trouble getting a job, since they often have to stay with their little ones in the hospital, "and there aren't many companies that will put up with employees being absent from work."

"So it seems to us that this way of giving them work, when they have the time to do it, can benefit these families," she said.

Some 20 families are part of this project, which has had a positive response in La Paz and other regions of Bolivia since it got started last December.

Besides the money, the activity stimulates the creativity of youngsters and becomes a kind of "occupational therapy" with which the parents can clear their minds, at least momentarily.

That was found to be true by Elizabeth Gonzalez, whose 8-year-old son Eduardo was detected in 2013 to be suffering from B-cell acute lymphoblastic leukemia.

Gonzales told EFE how much fun it was to make the dolls, because the kids "let fly their imagination" and they cut out different shapes of cloth to put "pretty little faces" on their monsters.