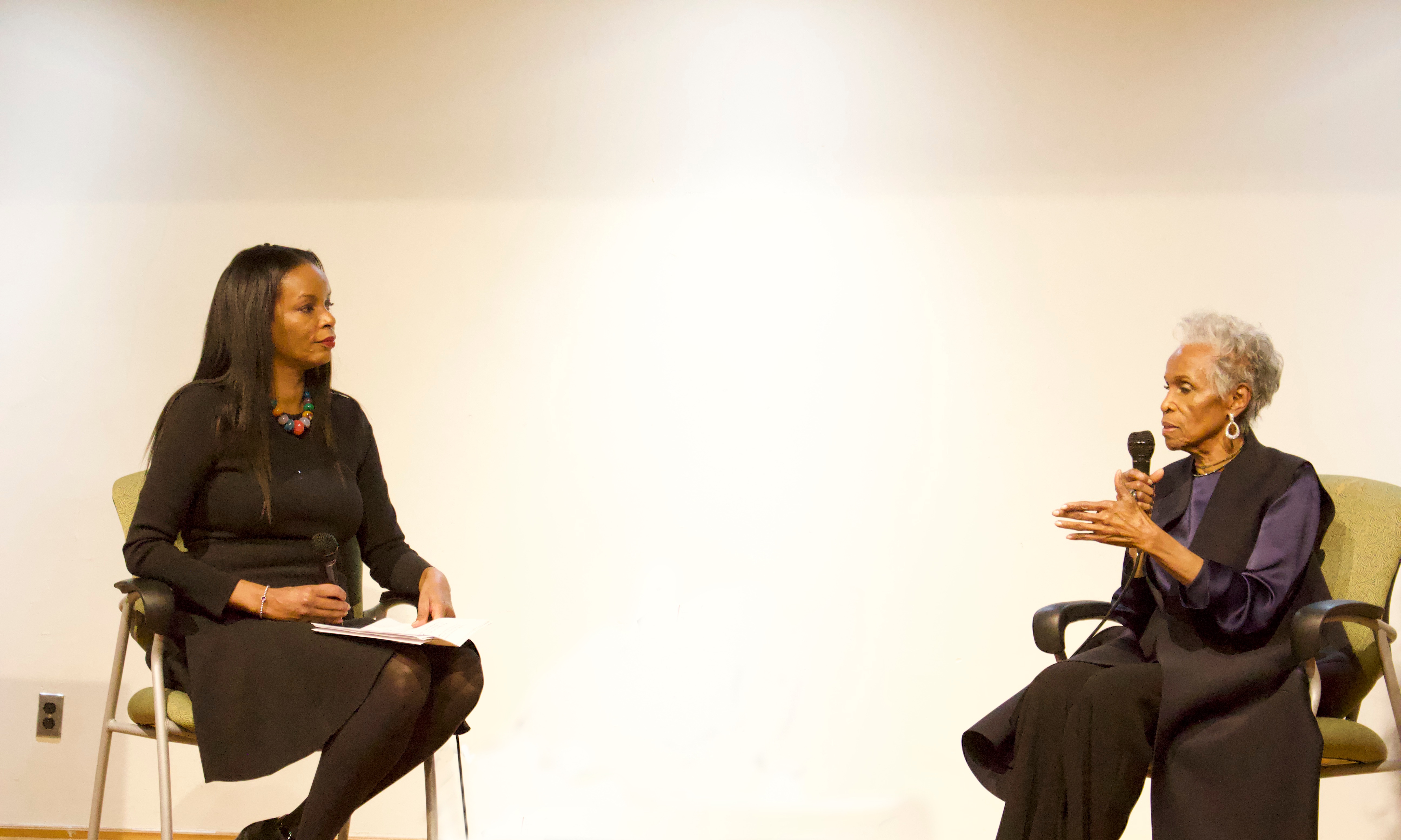 Dorothy Butler Gilliam: A conversation with a trailblazer of American media

During a conversation with Philadelphia Inquirer reporter Jenice Armstrong, Gilliam touched on a number of topics, including her memoir, her early experiences…

Washington D.C. was still known as “Chocolate City.” John F. Kennedy was president. The Civil Rights Movement and the fight to end racial segregation was in full force.

Dorothy Butler Gilliam was fresh out of graduate school, having earned her degree in journalism from Columbia University. After years of working in the black press, dating back to high school, she became the first African American woman reporter ever hired by The Washington Post. A reporter, columnist, and later editor, Gilliam’s career spans more than 50 years.

Gilliam sat in conversation with Philadelphia Inquirer columnist Jenice Armstrong at the African American Museum in Philadelphia to discuss a new book, her memoir titled “Trailblazer: A Pioneering Journalist’s Fight to Make the Media Look More Like America,” on Tuesday, Feb. 19.

She discussed how her career started, the many challenges she faced, how the media industry has evolved, the still existing need for diversity, and more. The conversation highlighted the courage, strength, and ambition that allowed Gilliam to accomplish what she did during a time when segregation and Jim Crow was still at the height of its evils.

As a black woman, Gilliam felt firsthand some of the many prejudices and injustices that exist for women and people of color nationwide.

Rewind 58 years, and there sat a time of civil unrest in America. Jim Crow tainted the social construct of the acceptable way to treat black people. Racism was everywhere, segregation caused separation of public facilities. Black people had to fight to obtain basic human and civil rights.

Here Gilliam was, a black woman working for a white publication, with a community of people behind her -- her family, fellow churchgoers -- to provide support.

Gilliam admitted that starting out, it was difficult getting to places when she was out for assignment. Oftentimes, she had trouble catching cabs. Downtown, where The Washington Post was located, there weren’t many black cab drivers, and when a white cab driver saw the color of her skin, they would often speed away.

“I think the fact that this was happening in the capital of the United States of America is really so important for us to remember,” Gilliam said during the conversation. “Because John F. Kennedy was in the White House... and he was beginning to talk about some of these issues as moral issues. The issue of poverty was a moral issue, the issue of race was a moral issue… these were bigger, deeper issues, I think, than most Americans had thought about at that point.”

But the extra time she always had to wait trying to catch a cab, Gilliam started using her shorthand in her reporter’s notebook to begin writing the story. It saved her so that she was able to make her deadlines.

Just having that seat at the table was a step towards the possibility of making the voices of the black community heard. Gilliam was a trailblazer in making that happen, which makes the title of her book more than fitting.

“Once we began opening doors, it was important also that we reach back and bring another one with us, or bring as many with us as we could. Because we knew that this country needed what we brought to it,” said Gilliam.

Gilliam often faced criticism with the columns she wrote. She recalled some of her editors saying, ‘you don’t write about anything, but race.’

However, it should be understood that the topic of race is an important one. Race was at the core of her experiences. Race was at the core of the stinging reality in the United States. Racial discrimination, the belief that one race is superior to the rest, is inextricably rooted in the founding of this country, and is still ongoing in our society today.

“I was reaching out to try to broaden the knowledge of a larger audience about who we were and about what we had contributed to this society, and how important it was that we, as African Americans saw images of ourselves, in the newspapers, in television,” Gilliam said.

At the time, the Washington Post hadn't been known for writing about the lives of black people, unless it had to do with crime, Armstrong stated.

Through her writing, Gilliam aimed to change that narrative around black people and show the many dimensions of what being black represents.

We can’t afford to have diversity fatigue

The talk of the need for diversity in the newsroom has been going on for decades.

Gilliam said she started writing the book in 2014, but it was really fortuitous for the book to be released now, because of the current state of politics and journalism.

The benefits of having a diverse newsroom is often stated. Diverse experiences, diverse perspectives, and diverse thoughts amongst a staff have proven to have a real impact. When it pertains to how a piece of news is presented, it’s important to have different ideas floating around to make sure it is presented fairly and objectively.

Gilliam said we can't afford to have diversity fatigue, particularly at this point in time under our current administration.

“We tell a better truth when we are diverse, than when we are seen only through the eyes of one of the communities in America," she said. "So, I think that sometimes when people say they have diversity fatigue, it’s just that they don’t want to dig into the deeper issues. And there’s some deeper issues that are crucial [for us to] look at.”

“These are subjects that need probing, and we need to look at the whole subject of white supremacy in America, and the way that the whole anti-blackness is woven into that.”

While subjects like these may be uncomfortable, the conversations are necessary because they've existed for centuries.

"As citizens, we have to realize what a different time we’re living in, and how a lot of things need to be reexamined for things to get to the state, and I think the media has a responsibility to be one of the leaders.

Particularly throughout the latter part of her career as a columnist, Gilliam showed how much she cared.

In 1997, Gilliam created the Young Journalists Development Program to help bring more young people into the journalism world. Journalists from The Post were sent to several of the high schools in the area and helped the students learn how to write stories.

“We were trying to give students voice. And through that, they would understand that they had a voice and that voice needed to be developed,” Gilliam iterated.

After several years, she moved to George Washington University, where she started a similar program there called Prime Movers. This program expanded beyond just newspapers, and helped provide mentorship for high school students looking to enter any area within the field of journalism.

For the next generation of journalists and entrants of the media industry, Gilliam advised them to just keep moving forward.

She added that she hoped more conversations could be had between races, and we all remove the masks we wear that disallow us from seeing the real issues that plague our society.

She highlighted race, generation, and class as three talking points that could really help us understand what this nation is all about, and improve journalism.

“We’re talking about how the country was constructed in such a way that there were privileges that one group had that pushed them ahead politically, and socio-economically, and then there were pressures -- many from the government itself -- that other people suffered.”

“We have to deal with that if we’re gonna move forward… I think we’ve seen how things can be, but we want to see them improved.”