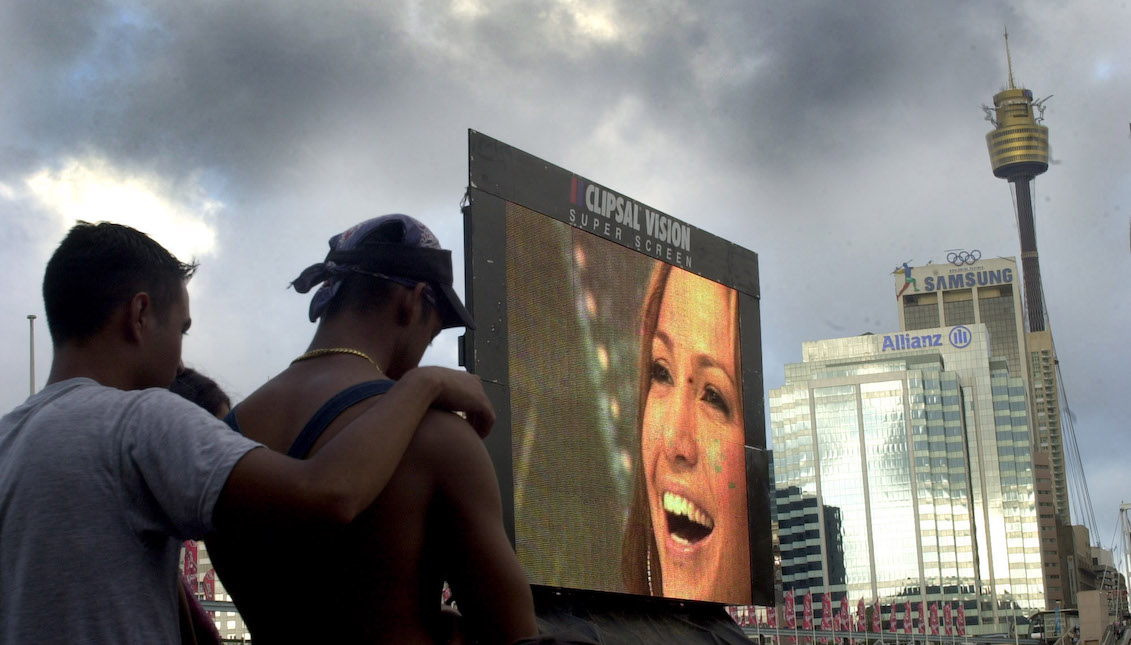 Two men watch as singer Jennifer Lopez's performance is projected on a video screen on February 22, 2001, in Sydney, Australia. (Photo by Jeremy Piper/Newsmakers)

A new study by the University of South Carolina says between 2007 and 2018, only 3% of the main roles in Hollywood were given to Latinos.

Just weeks ago, we celebrated how sound in the United States has been created on the solid foundation of the Latin rhythm. Since the inauguration of Donald Trump, hundreds of headlines have talked about how Hispanics in the country are now the most important minority, and that midterm elections were largely decided by their participation

However, on the big screen, we remain ignored.

A study by the University of South Carolina, in conjunction with the National Association of Latino Independent Producers (NALIP) and Wise Entertainment, explained how only 3% of large productions have a leading or cast actor of Hispanic origin.

The study entitled “Latinos in Film: Erasure on Screen & Behind the Camera” evaluated more than 1,200 films that have set the tone in the last 12 years and found that 47% of the films analyzed "completely erased Latino-speaking characters."

"Out of 1,200 movies, a total of 688 erased males from the Latino community and 828 erased females," the document explains, adding that although "the degree of invisibility" of Latinas seems to be declining, only names like Cameron Diaz, Jennifer López, Eugenio Derbez and Jessica Alba seem to be considered for leading roles in the industry.

Similarly, and despite the growing recognition that has been given to Latino directors such as Alfonso Cuarón, Alejandro González Iñárritu or Guillermo del Toro, the community seems to be excluded from the production and creation roles behind the camera.

Of the 3,616 films produced, Latinos appeared in only 3% of the credits, with a profound gender difference where there are 4 male producers for each woman.

New Nielsen report confirms limited Latino representation on TV
January 25th, 2023
From Jenna Ortega to Diego Luna. Who were the big names representing Latinos in mainstream media in 2022?
December 16th, 2022
The DCCC spent more than ever before on Latino and Spanish language outreach in 2022, but they’re still on the defensive
December 6th, 2022

This problem of inclusion in the industry seems to be perpetuated by the rigid patterns of representation, where Latinos have a place as long as it is to represent roles of criminals, immigrants or poor people.

In an industry where the Hispanic community is synonymous with $1.7 billion in consumer spending and represents 39% of the total population of key states like California, the exclusion is nothing short of alarming.

"Given the above trends, we were curious how often Latino characters were completely erased on screen," the authors conclude. "Not giving characters a voice is an overt form of oppression."

According to Professor Stacy L. Smith, director of research, the fair representation of the Hispanic community on the big screen is more urgent than ever.

"At a time when Latinos in our country face intense concerns about their safety, we urgently need to see the Latino community authentically and accurately represented throughout entertainment," she said in a statement.