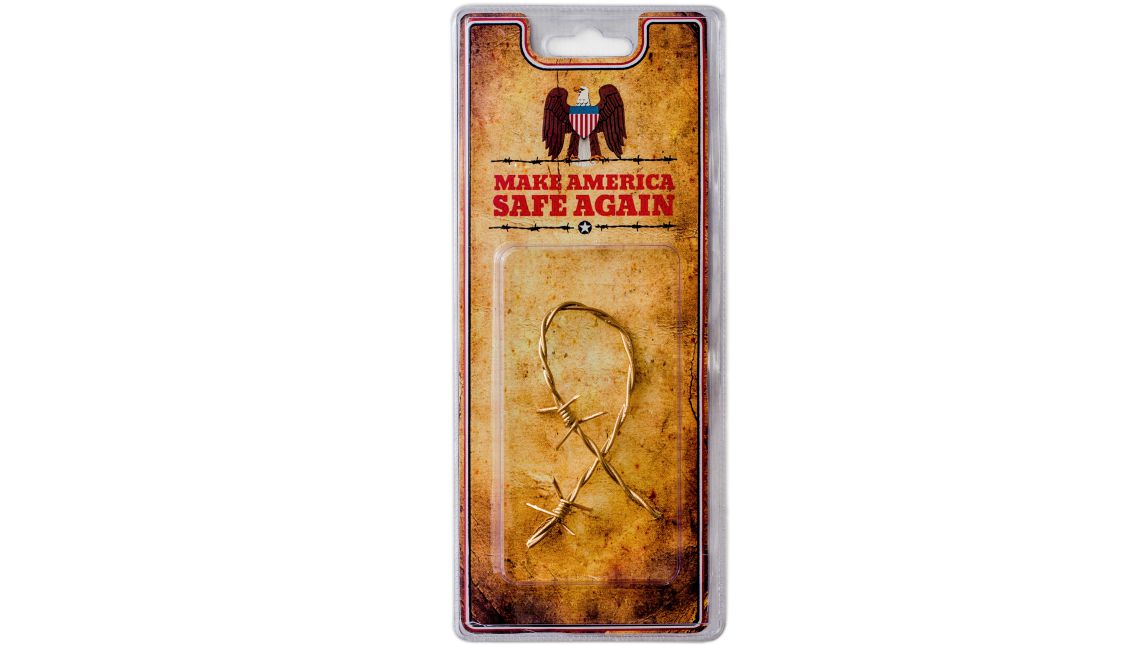 One of the works by the Amarist art studio, on display at the Art New York 2017 contemporary art fair, in New York, United States. EFE/AMARIST

The aim is to change the meaning associated with the razor wire, said Lozano, from "a symbol of jail, separation, border" into the complete opposite.

Transforming the razor wire on the border fencing into jewelry is what the young Spaniards with the Amarist art studio are proposing in an avant-garde piece with altruistic aims on display starting Wednesday at the Art New York 2017 contemporary art fair.

Clara Campo and Aran Lozano are the founders of the art studio established in Barcelona in 2014 and which is now making a splash in New York.

The pair describe their piece entitled "Welcome" as a conceptual work that, just like the collection that they are assembling, shows their clear interest in socio-economic conflicts on the current international scene.

In the center of the Amarist exhibit, spectators find the figure of a man kneeling before a mesh or net of razor wire. It's "the image of what the refugees find when they get to the border," Campo told EFE.

In contrast, the same small razors comprising the wall are displayed - hanging from the mesh - as luxury jewelry for sale.

To highlight the contrast, the artists have polished, gilded and packaged the razors of border walls in little plastic boxes with messages such as "Welcome?" and "Making America great again."

The latter message taken from the slogan that President Donald Trump used during his election campaign.

The aim is to change the meaning associated with the razor wire, said Lozano, from "a symbol of jail, separation, border" into the complete opposite.

"Our aim is to pose the question, so that those who pass by ask it," said Campo.

In Search of an "Authentic" Border Narrative
April 9th, 2021
Quetzal Maucci: 'Borders are a social construct'
July 24th, 2018
The reality of Climate Change: from hurricanes to massive migrations
November 7th, 2017

Over five days, Amarist will be participating in the fair as a form of social commitment to raising awareness about the meaning of borders within our globalizing world.

It is worth noting that, quite aside from the US situation of undocumented migrants, Europe and Spain are also experiencing a serious refugee crisis.

The project has received the backing of the United Nations High Commissioner for Refugees, to which all proceeds collected will be donated.

Both Campo and Lozano are enthusiastic about the interest their work has aroused in the US, where they hope to find space to continue growing.

Lozano said that the conceptual nature of the work is part of the "big task of communicating" its message.

"In the end, art is a reflection of society and, if someone doesn't shake up people's awareness a bit, we just go superficially through life," Campo said.

To be found at the New York fair, now in its third year and sponsored by Art Miami, from May 3-7 are a number of works never before displayed by more than 1,200 artists from 50 nations.