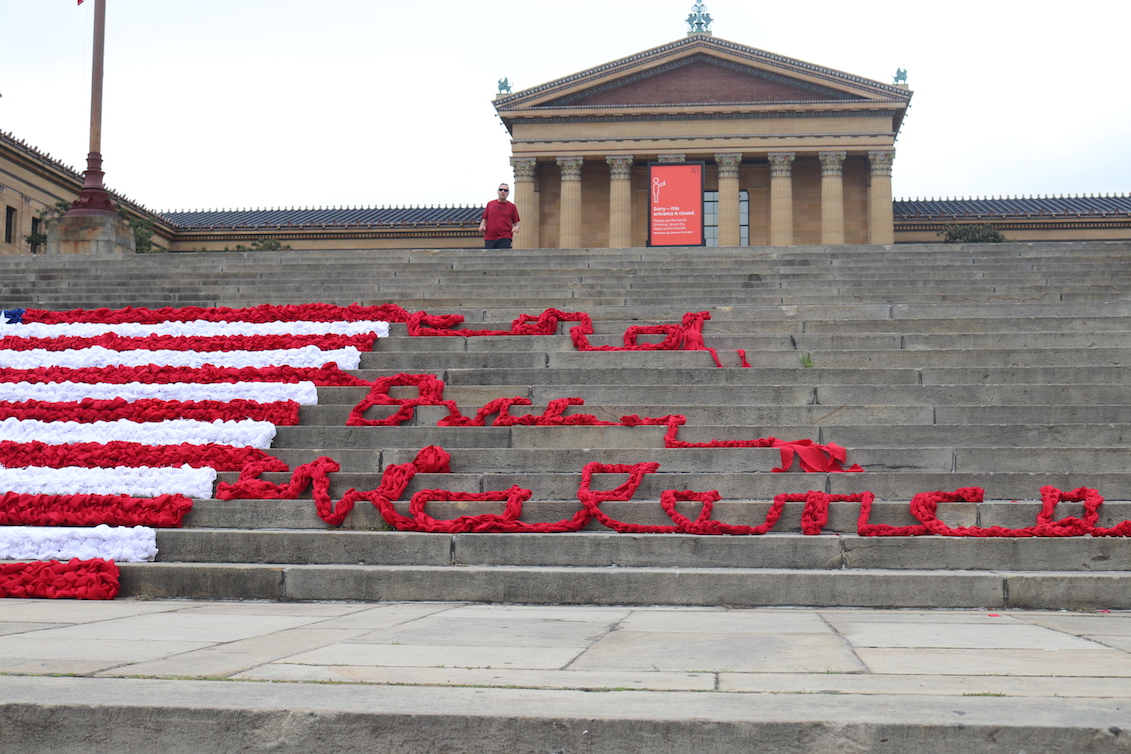 On Wednesday, Sept. 9, the nationwide art campaign came to town to advocate for an end to gun violence.

On a warm Wednesday in Philadelphia, artist Melissa Haims unraveled yarn on the Rocky Steps along with an American flag.

Three strings laid next to the flag that spelled out “End Gun Violence.” 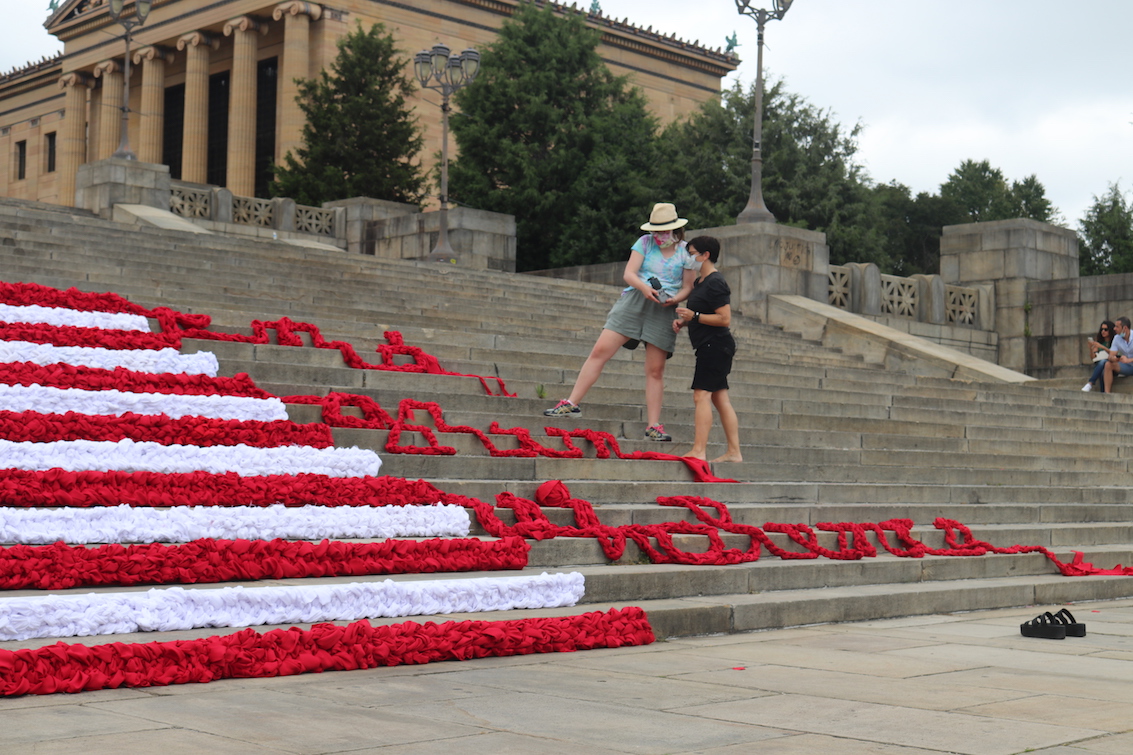 Alexis Confer, the Executive Director of March For Our Lives, explained the display was part of the organization’s “Our Power in the States Tour,” with Philadelphia being one of the nine stops nationwide.

It highlights the role art activism plays in telling the stories of gun violence victims during elections and as a tool for advocating gun prevention.

“Each one of these stops is how gun violence intersects with another societal issue,” said Confer.

March For Our Lives was created after the Marjory Stoneman Douglas High School shooting in Parkland, Florida in 2018. Very quickly, chapters opened up nationwide with over 300 now throughout the nation that are youth led and youth run.

“Our Power” is a campaign that was in the last six months. It is to educate young voters, not only to go out and vote for a candidate, but to realizing that voting is an act of rebellion too.

We’ve partnered artist Melissa Haimes (@mmhaims_) to create an installation on the steps of the @philamuseum focused on the root causes of gun violence: an American flag unraveling to spell out “End Gun Violence.”

Some of the volunteers present at the ARTivism display at the Art Museum said what got them involved was the gun violence plaguing the area at the time. Philadelphia is currently experiencing one of its worst years of gun violence in more than a decade. 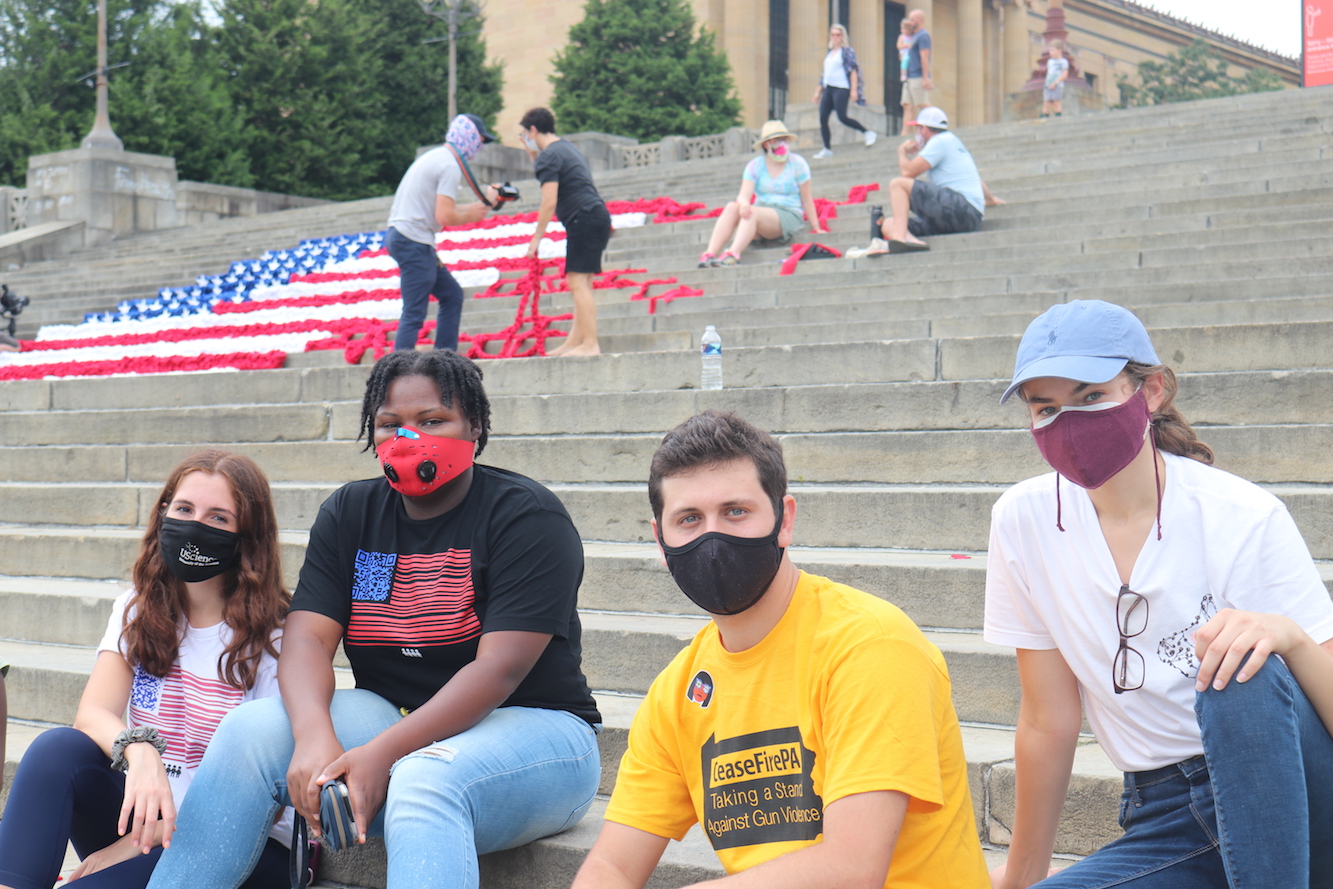 Max Milkman, a digital organizer for CeaseFirePA noted that in just eight months, there have been over 100 people under the age of 18 shot and killed in the city, including some under the age of one years old.

March for Our Lives will tour the U.S.
June 5th, 2018
Emma González, a young woman who challenges the national status quo
May 24th, 2018
This is what happens when you mess with David Hogg
March 30th, 2018

“This is ridiculous what is happening here in the city,” he said.

He went on to decry the inaction of lawmakers at both the state and city level to pass gun laws or address the deeper systemic ills that cause gun violence like poverty and poor education.

Philadelphia City Council has held multiple emergency meetings about the gun violence epidemic plaguing Philadelphia, however no immediate action has been taken other than putting into place initiatives that government officials believe will help control the spike in shootings.

One activist also present, who was a South Philly native, said that her family dealt with a lot of gun violence when she was younger.

She noted that for her, something had to change as she got older, and that is when she found March for Our Lives.

Despite Philly’s ills, March For Our Lives along with CeaseFirePA are doing all they can to seek change from the NRA and government officials through protests, voting, lobbying, art, or whatever talent activists can bring to envision a brighter future.