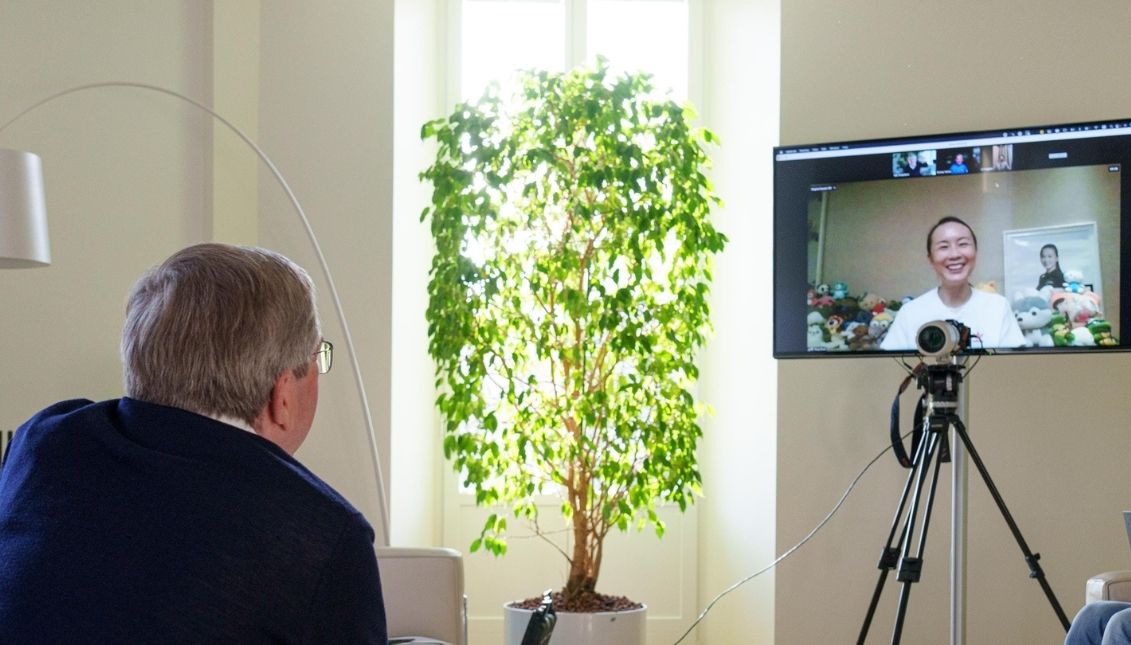 The IOC President and the Chairman of the IOC Athletes' Commission hold a video call with Peng Shuai. Photo: IOC media

Peng Shuai reappeared after denouncing a powerful politician in her country for sexual abuse.

Chinese tennis player Peng Shuai, who had been missing for almost three weeks, reappeared in a public way on Sunday, Nov. 21 through a video call with the president of the International Olympic Committee Thomas Bach. However, while the call was intended to reassure the world that she was safe, it has raised more questions than answers.
The IOC said in a statement that the tennis player "explained that she was safe and sound, but that she would like her private life to be respected." According to the institution, the video call lasted 30 minutes and involved the president of the athletes' commission, Emma Terho, and China's Li Lingwei, who also belongs to the IOC.
"I was relieved to see that Peng Shuai was fine, which was our main concern," Terho said in a statement. "She seemed to be relaxed. I offered her our support and to keep in touch at any time that was convenient for her, which she obviously appreciated."
The IOC released a photo showing Bach in front of a screen featuring Peng, but did not release video of the call. On the same day, the China Open released videos and photos of her appearance at a junior tennis tournament in Beijing earlier that morning.
The brief statement from the IOC, which offered few details and did not follow up on its allegations, seems unlikely to close the door on Peng's case, and is leading to increased criticism of the sports body, which was already facing calls for a boycott of the Beijing Winter Olympics, which open Feb. 4.
"It was good to see Peng Shuai in the latest videos, but they do not alleviate or address the WTA's ability to communicate without censorship or coercion," a WTA spokeswoman said in an email.

The WTA spokeswoman said the video call "does not change our call for a full, fair and transparent, uncensored investigation into her sexual assault allegation, which is the issue that gave rise to our initial concern."
Amnesty International China researcher Alkan Akad told Reuters that the video call did not alleviate fears about Peng's well-being.
Concern for the former No. 1-ranked doubles player grew in the past week, as she had not been seen since accusing a senior Chinese official of sexual assault on Nov. 2. Tennis stars and fans demanded to know her whereabouts under the hashtag #WhereIsPengShuai.
TAGS
Log in | Register
00:00 / 00:00
Ads destiny link