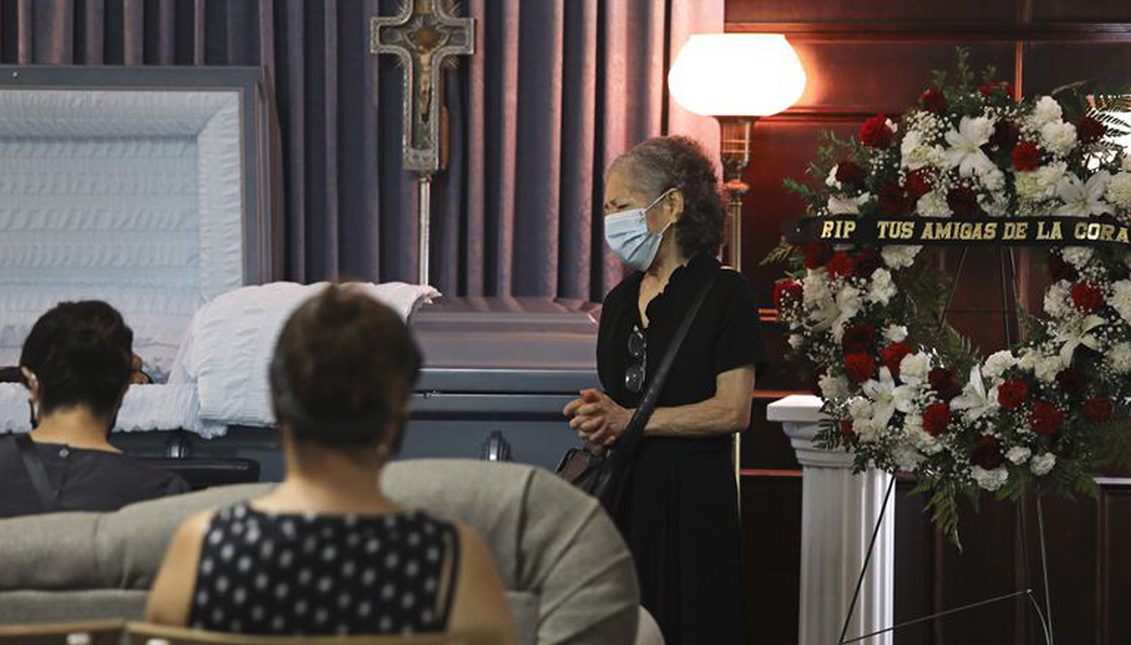 Maria Ruiz, center, widow of Jose Almanza, thanks those in the community taking the time to say goodbye to her husband during his funeral service on Aug. 15, 2020. Photo: Abel Uribe/Chicago Tribune.

Jose Almanza, the man who sold peanuts to get his kids through college

Almanza was killed on the night of Aug. 2 after being hit by a car pursued by Chicago police.

Stories like the life of Jose Almanza are ones that shouldn’t only be recognized in death.

The candied peanut and pecan salesman spent 25 years selling his sweet homages to home outside of Taqueria Atotonilco in Chicago’s Little Village neighborhood.

The goal? To send the two sons he left in Mexico in 1995 to college.

He left his hometown of Salamanca, Guanajuato to keep his family out of poverty after his business selling fruit and other goods failed. His wife, Maria Ruiz, joined him a few years after he had established his base in Chicago.

“We wanted to make sure our sons attended college, that was our only goal,” Ruiz told Chicago Tribune reporter Laura Rodríguez Presa.

In the next 25 years, Almanza would only see them once while returning to Mexico in 2000 when his father died.

Stateside in the Windy City, Almanza worked various manufacturing before finding what he would become known for.

Garapiñados, or candied peanuts, are a traditional street food found throughout Mexico.

However when coming to Chicago, Almanza had difficulty finding them anywhere.

After several trial runs handing out samples to neighbors on his block to perfect his recipe, Almanza asked Raul Muñoz, owner of Taqueria Atotonilco, if he could open up a stand selling his candied goods outside the restaurant.

Muñoz agreed and Almanza worked almost every day for the next 25 years in front of his restaurant.

Over time, Almanza’s presence became a staple in the community.

Financially, Almanza was able to complete his dream of sending both sons to college. Sergio Almanza got his degree in computing and works as a teacher in Guanajuato while Oliver Jose Almanza followed a path into vending like his father with a technical degree in business industry.

Almanza’s achievement embodies part of what the American dream is made of. His tough decision and journey in 1995 is one similar to those of millions that still come to the U.S. annually despite a leader that openly defies them.

After completing his and his wife’s American dream, Almanza and Ruiz did have plans to return to Mexico to live with their sons. But in 2019, Ruiz was diagnosed with cancer, putting those plans on indefinite hold.

Her husband wouldn’t get the chance to consider a return again.

Even though Muñoz closed for the coronavirus pandemic, Almanza still made the daily trip to the storefront to open and run his candied nut stand.

After a day’s work on Aug. 2, Almanza returned home after 9 p.m., dropped off his excess merchandise and left to make a quick trip to a nearby Walgreens.

When he failed to return from the trip to the pharmacy, his wife went looking for him and encountered the police as she stepped out her front door about to give her the bad news: he had been struck by a car whose driver was attempting to evade the police.

He was taken to Mount Sinai Hospital, where he died three days later on Aug. 5.

Almanza’s death has left not only a void in his family, but also in the community he became an icon in over more than two decades.

The table he set up each day in front of Muñoz’s taqueria is now decorated with flowers and other commemorations to his life from members of the community.

“He was an example to many of us, born in this country, of why people migrate here and what one must do to succeed,” said Muñoz.

His family has started a GoFundMe to fund his funeral and is now playing the waiting game to finally return him home to Mexico for the burial.