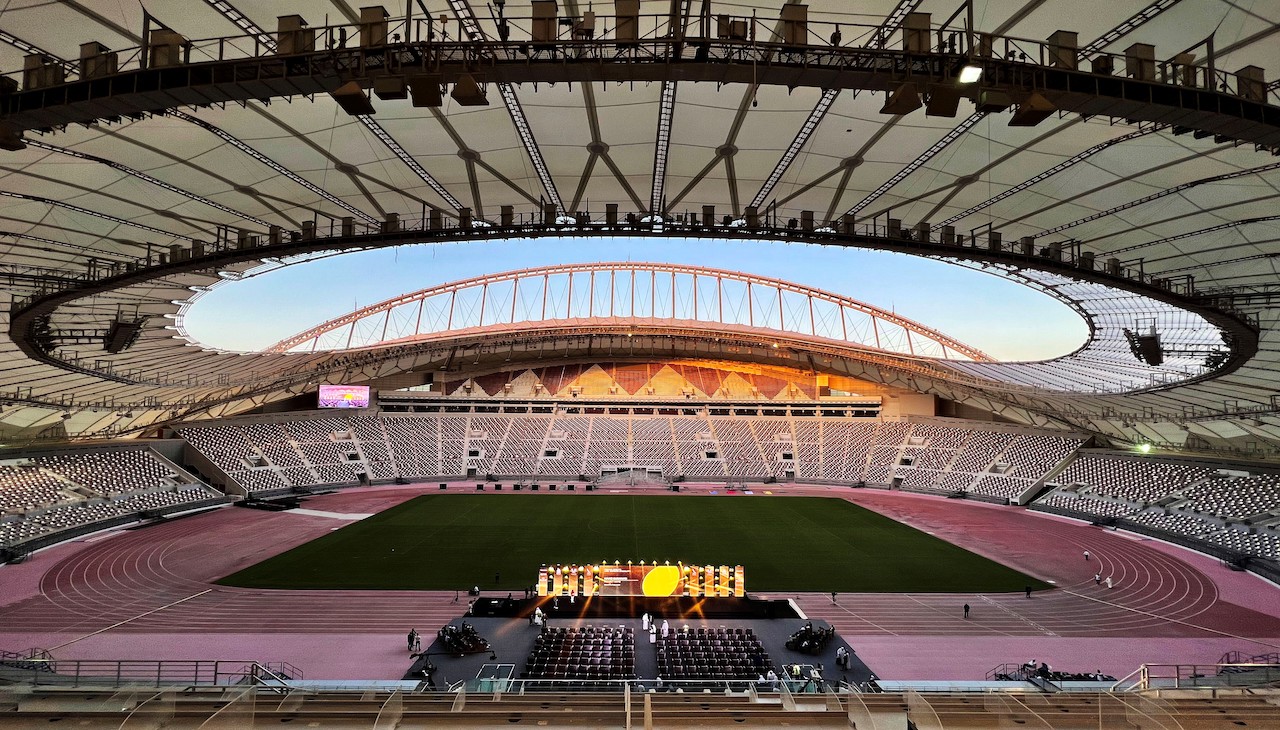 Khalifa Stadium in Doha, Qatar, which will host the World Cup matches this year. Photo: Wang Dongzhen/Xinhua via Getty Images.

NPR and Futuro Studios to collaborate on dual-language podcast, ‘The Last Cup’

Ahead of the World Cup later this year, the soccer themed podcast will explore how the ‘beautiful game’ impacts immigration, class, and identity.

In anticipation of this year’s FIFA World Cup, NPR and Futuro Studios, two of the leading names in media and radio, have come together to launch a dual-language podcast titled, The Last Cup.

Hosted by NPR’s Jasmine Garsd, the podcast will use soccer to dissect subjects such as race, class, immigration, identity, and capitalism.

The podcast will launch later this Fall ahead of the one of the world’s most watched sporting events and tournaments that occurs every four years. In addition to this, the podcast will publish episodes in both Spanish and English, an aspect not done in a lot of other podcast productions.

For the first time, The Last Cup also brings together two media organizations that set the standard and also look to alter the future of the huge podcast industry. According to the Podtrac ranking, NPR is one of the leading podcast publishers with over five shows in the top 20 Podtrac rankings.

Futuro Studios, a creative division of Futuro Media, founded by pioneer and trailblazing Latina Journalist, Maria Hinojosa, have also produced a number of popular and award-winning podcasts. These include La Brega on WNYC, New York Public Radio, LOUD: A History of Reggaeton on Spotify, the Pulitzer Award-winning Suave, and Anything for Selena on WBUR, Boston's NPR station.

"Soccer unites the Latin American diaspora far and wide, making the World Cup the perfect subject for our first dual language podcast,” said Lauren Gonzalez, Senior Manager of Content Development for NPR. “Working closely with Futuro, we have assembled a dream team of journalists who share in the lived experience and the fandom. I'm eager for listeners to hear what we've come up with."

The host Jasmine Garsd has worked across multiple sectors of NPR as well as being able to work as a part of some of the nation’s most esteemed public radio shows such as PRI’s The World, a global initiative that covered women’s lives in which she was the lead reporter. In addition to working there, she also worked on APM’s Marketplace.

"Jasmine is one of the industry's best-kept secrets. She's a brilliant, funny, whip-smart writer and reporter who is going to blow audiences away,” said Marlon Bishop, VP for podcasts at Futuro Studios and a writer and producer on The Last Cup. “Futuro is a leader in the podcast space and brings the sensibility to support her, as well as expertise in dual-language productions. NPR is still the gold standard in audio journalism. The show that's coming together out of this collaboration is exciting, informative, heartfelt and often hilarious.”

In her career, Garsd has covered a wide range of global issues that include immigration, race, and poverty. She is also an avid soccer and Latin music lover, making her the most qualified candidate to host The Last Cup. Currently, she serves as the criminal justice correspondent for New York City based NPR National Desk. She is also the founder of her own podcast show along with NPR’s Felix Contreras titled, Alt.Latino, back in 2010.

The show will launch this Fall with a release date to come in the near future ahead of the FIFA World Cup hosted in Qatar.

"The Last Cup has all of the ingredients we look for and love in a podcast: a dynamic host with a fresh, relatable connection to the story she's telling, a gripping narrative and the ability to tell us something profound about society,” said Maria Garcia, Executive Editor at Futuro Studios. “This isn't a podcast just about soccer. This is a podcast about a universal longing for home."