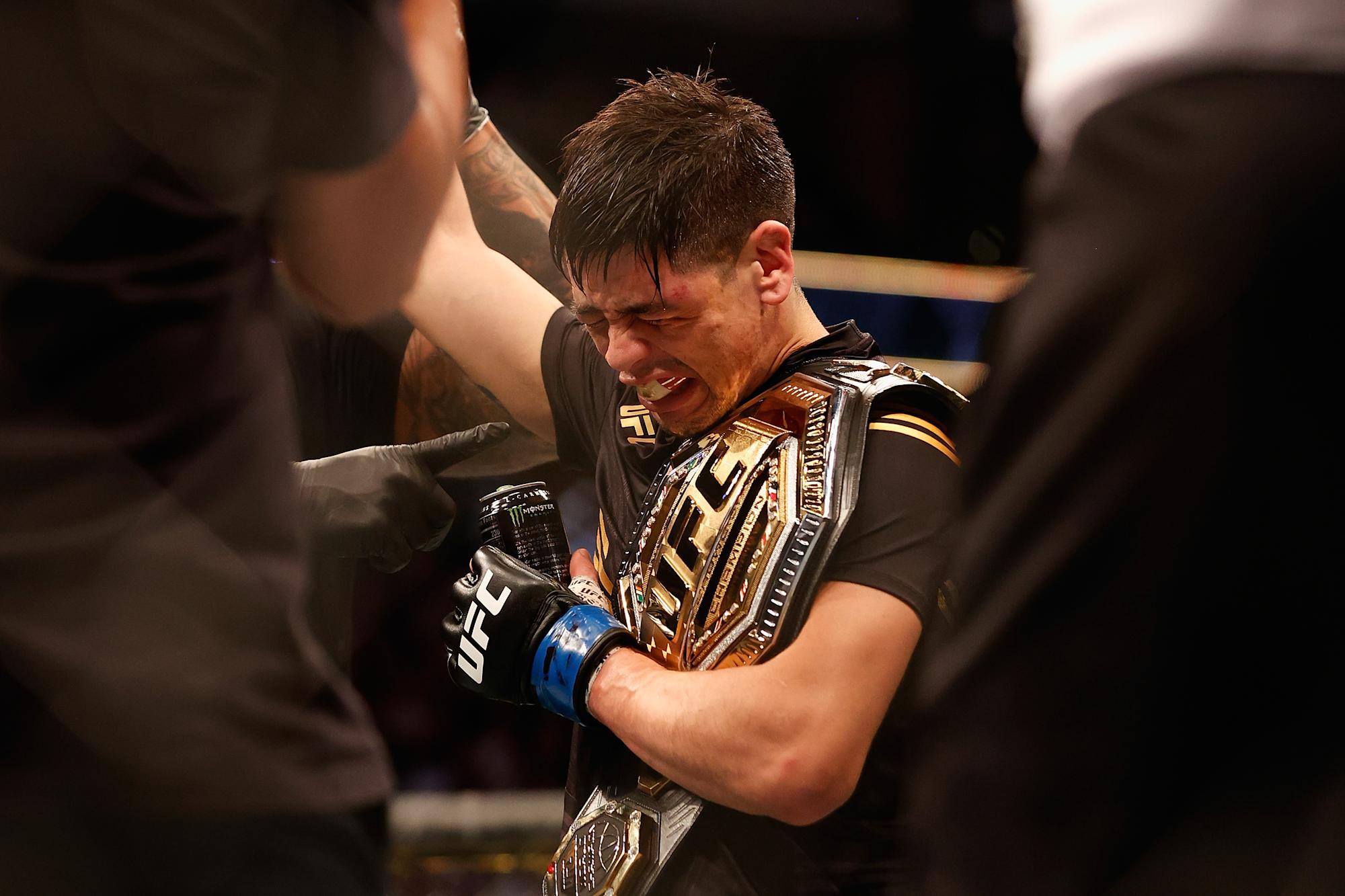 Brandon Moreno of Mexico celebrates after defeating Deiveson Figueiredo of Brazil to win the flyweight championship during their UFC 263 match at Gila River Arena on June 12, 2021 in Glendale, Arizona. (Getty Images)

Moreno defeated defending champion Deiveson Figueiredo on the UFC 263 card via a third round submission, improving his overall career record to 19-5-2 (11 wins by submission).

"I can't even believe it," Moreno told reporters after the fight. "This is a real dream come true. I worked so hard for this belt. I have 10 years as a professional, 15 years training every single day. ... This moment is so special. Not just for me, but for all my people, for my country, for my family, for my team ... for everybody."

This marked the second bout between Moreno and Figueiredo, as the two fought to a majority draw on Dec. 12, 2020.

This time around, Moreno managed to connect with 47 total strikes to Figueiredo’s 24, and scored two takedowns compared to one for Figueiredo.

This victory represents a bit of a redemption story for the 27-year-old native of Tijuana.

In 2018, Moreno was released from UFC after two losses by unanimous decision that saw his overall record drop to 14-5, in addition to uncertainty surrounding the flyweight division as a whole. After being cut from UFC, Moreno signed a contract with the mixed martial arts promotion Legacy Fighting Alliance, where he fought and won his only bout, picking up a fourth round TKO victory over Maikel Pérez.

In September 2019, Moreno returned to the UFC and since then, has picked up a 4-0-2 record, including three straight victories that led to his two flyweight title bouts against Figueiredo in December and Saturday night, respectively.

While reflecting on what it means to be the first Mexican-born UFC champion, calling it “one of my principal goals,” Moreno displayed his respect to the Mexican-American UFC former champions who came before him, namely Cain Velasquez and Henry Cejudo.

“Cain Velasquez [brought] the UFC to Mexico in 2014. That was amazing, it put the mixed martial arts in Mexico to another level,” Moreno told mmafighting.com.

“But now, me, I’m born in Tijuana... I grew up there, I went to school there. I suffered the bad opportunities, the... government there, the huge companies don’t put support in the sports, especially in the mixed martial arts because it’s a new sport for the country. So I know with this belt I put the sport on another level and that makes me feel amazing.”

Moreno was born and raised in Tijuana, Mexico to a family who owned a modest piñata business. He began training in mixed martial arts at the age of 12, initially as a way to lose weight. Before making the decision to pursue mixed martial arts professionally, Moreno had intentions to attend law school to become a lawyer.

Fifteen years later, he has etched his name in the history books as the first-ever UFC champion born in Mexico.