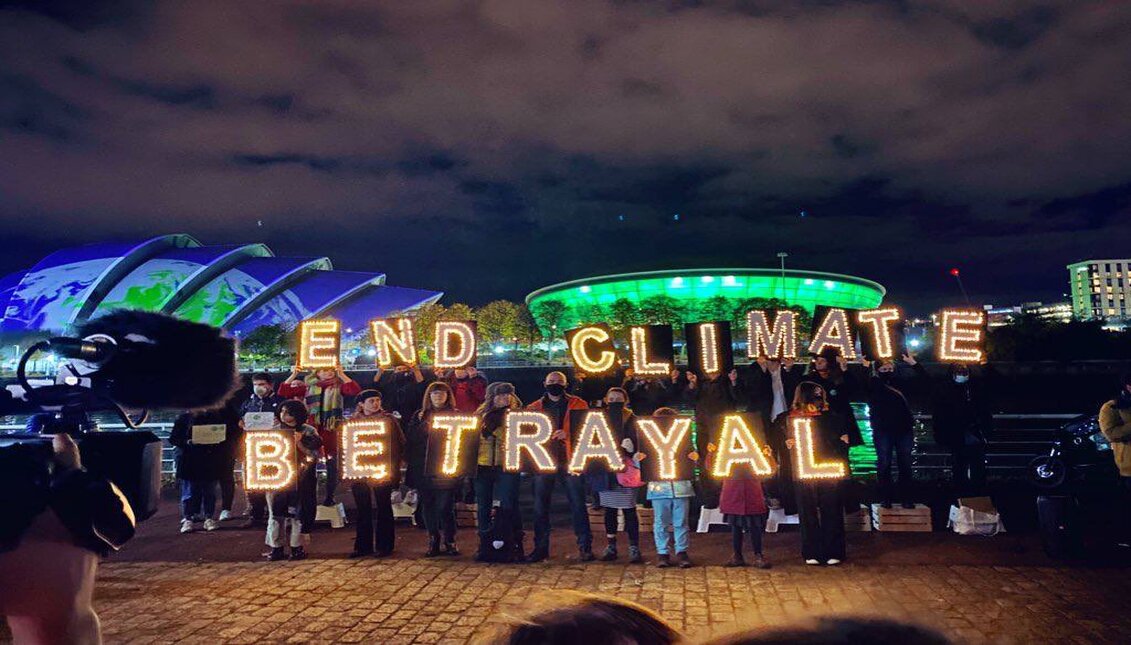 The entire planet is attentive to the promises made in Glasgow. Photo: @Luisamneubauer.

Amid the climate summit, environmentalists and world leaders are openly clashing over their actions and promises to curb global warming.

China, Russia, and the U.S.

Russian spokesman, Dmitri Peskov, said from the Kremlin that the country does not agree with the accusations made by U.S. President Joe Biden, assuring that his country is carrying out concrete actions against climate change, which he referred to as “coherent, thoughtful and serious.”

The absence of Vladimir Putin has been widely criticized by the other nations attending COP26. Chinese President Xi Jingping is also not in attendance, and Biden him in his speech on Tuesday, Nov. 2, of "turning his back" on this crucial moment for the struggle against global warming. China is considered the top greenhouse gas emitter, while Russia closes the top five on the list.

From Beijing, the spokesman for Chinese diplomacy, Wang Wenbin, responded that "actions speak louder than words,” referring to the accusations from Washington, and described them as empty.

The participation of these two countries in the summit was reduced to a video speech by Putin and a written message from Jinping.

The Russian spokesman also stressed that although the tundra is on fire, it's the same way the forests are burning in California, Turkey and other parts of the world. In October, Putin's government revised its strategy until 2050 to reduce greenhouse gas emissions to 79% which it announced in 1990, and planned to reach carbon neutrality by 2060.

Some analysts were not surprised by the absence of the Chinese president, since he has not traveled anywhere since the beginning of the pandemic, while pointing out that China has made progress in the development of renewable energies. However, a growing shortage of electricity, which has generated increased demand for coal, could delay Beijing's goals of reducing demand for this mineral by more than 80% by 2060.

Through a letter addressed to the 27 leaders of the European Union, and signed by a group of scientists and celebrities such as Leonardo Di Caprio and Russel Crowe, activists accused these governments of not treating the climate crisis as a real crisis and of not mobilizing the sufficient resources to take strong measurements.

The letter, through which they address not only politicians, but also the media and financial institutions, calls for immediate measures to avoid a climate catastrophe and proposes a series of steps to carry them out.

Thunberg emphasized that it is necessary to immediately stop all investments destined for the exploration and extraction of fossil fuels, as well as the aid that is destined to the sector, which she accuses of wanting to wash its image with actions that are useless compared to the damage their business practices cause the planet.

The environmentalist also urges the European Union to create the crime of "ecocide," through which drastic actions could be taken against those who cause damage to the environment. It's an issue where she thinks policies are not designed to properly punish those who violate the natural heritage of humanity.

The letter, which already has more than 1.5 million signatures, highlights the call to the protagonists of COP26 and urges them to do "what seems impossible."

Here is the full letter (you can also sign it).

Wow! Now almost 1,5 million people all over the world have signed our plea to for world leaders to end the climate betrayal during #COP26 . People are mobilising and rising together.

After Iván Duque's ambitious announcement of reaching carbon neutrality in 2050, environmentalists attending the summit accused the leader of not having coherence between what he promises and the actions he is taking in his country.

They specifically alluded to the Escazú agreement, which aims to guarantee the full and effective implementation in Latin America and the Caribbean of the rights of access to environmental information, public participation in decision-making processes, and access to justice in environmental matters.

According to those who oppose Duque, his government has not passed the request to apply to the agreement marked as “urgent,” which will delay an issue that can not take any more time.

Likewise, the lack of protection for environmental leaders in Colombia and the few resources allocated to guarantee the safety of those who fight for the environment were criticized.

A question of credibility

With all the announcements to be published at COP26, there are already concerns about compliance with them. Will governments keep their word? Will companies keep their promises? According to statements to the UN by Dhananjayan Sriskandarajah, executive director of Oxfam GB, the lack of real and tangible commitments from rich countries and different private and financial entities is worrying, as there are not enough details to suggest that the promises made will be fulfilled.

Until there is a real flow of resources directed to the poorest or developing countries to combat global warming, as well as a distribution of aid to the most vulnerable communities that already experience famine seasons due to extreme climatic conditions, what happens at COP26 will be considered as a failure. It is now when actions must do the talking.