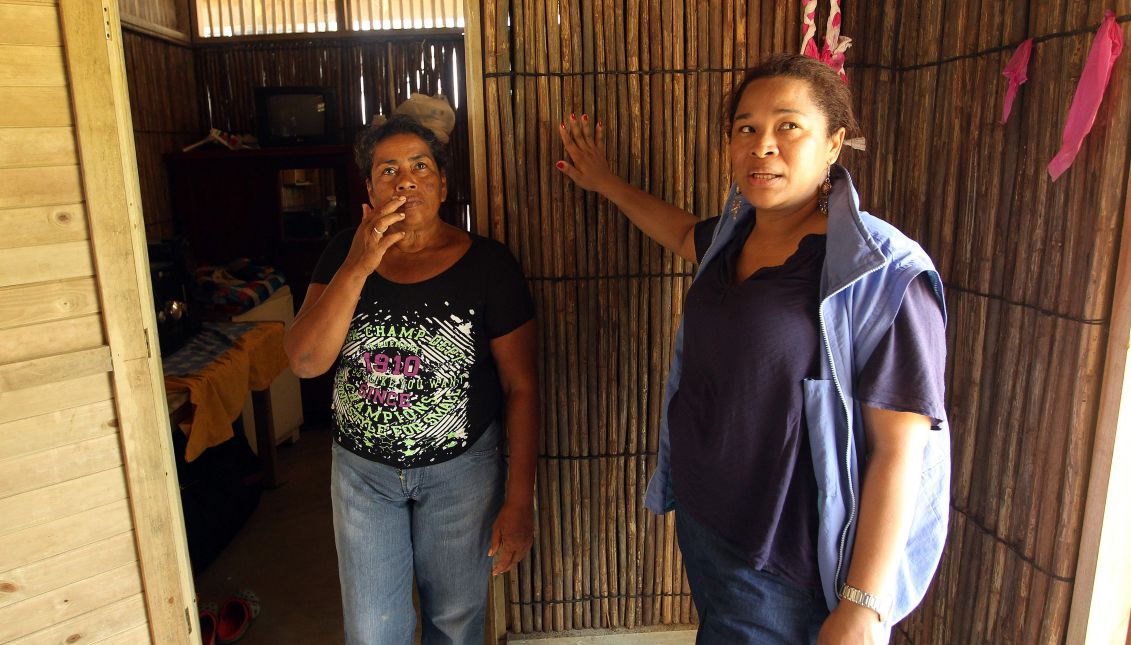 Neida Zambrano (l) and the head of the local United Nations project to adapt to climate change, Diana Diaz (r), give a tour of a new house adapted to global warming in the Colombian town of El Torno on April 22, 2017. The town was seriously affected in…

In Colombia, a model town for sustainable adaptation to climate change

The town of El Torno, in Colombia's northern province of Sucre, was seriously affected by flooding, which destroyed crops and homes, but today the community of…

The town of El Torno, in Colombia's northern province of Sucre, was seriously affected by flooding, which destroyed crops and homes, but today the community of 600 residents is an example of resilience and sustainable adaptation to climate change.

"This town has been totally reborn since the torrential rains that almost destroyed it in 2010," said the head of the United Nations project to adjust to climate change in the area, Diana Diaz.

Since 2013, the Environment Ministry and the UN Development Program have been working together with local leaders in the region to prepare the residents of the zone for the adversities caused by global warming by restructuring agricultural, housing and other multidisciplinary plans.

"We'll never avoid natural phenomena, but we can reduce their impact on the public," said Diaz, a psychologist who worked on social projects in Haiti after the deadly 2010 earthquake and who is now working in Colombia, which on Saturday observed Earth Day, along with the rest of the world.

Along with other activities, the UNDP has helped develop traditional crops and seeds that resist flooding, droughts and plagues, has created housing adapted to adverse climate conditions and has set up an ambitious network of hydrological stations that warn local residents when the San Jorge River starts to become a threat due to rising water levels.

These innovations did not exist in 2010 when heavy flooding devastated the area, affecting 211,000 people in the La Mojana region, destroying crops, ecosystems and more than 20,000 homes, although thankfully causing very few deaths.

"With projects like this one, costing some $8 million, tragedies such as the mudslide in Mocoa last month (which killed more than 300) can be avoided. The disasters are not natural, they are social and political," said Diaz, expressing pride in the forests planted by the communities along the San Jorge River, which help regulate its course along with providing fruit and grazing land for livestock.

"The 2010 emergency was a catastrophe, it impacted the entire area. Before, it was everyone for himself, but today we're calmer because we all know what to do if that happens again," El Torno community leader Manuel Antonio Madera told EFE.