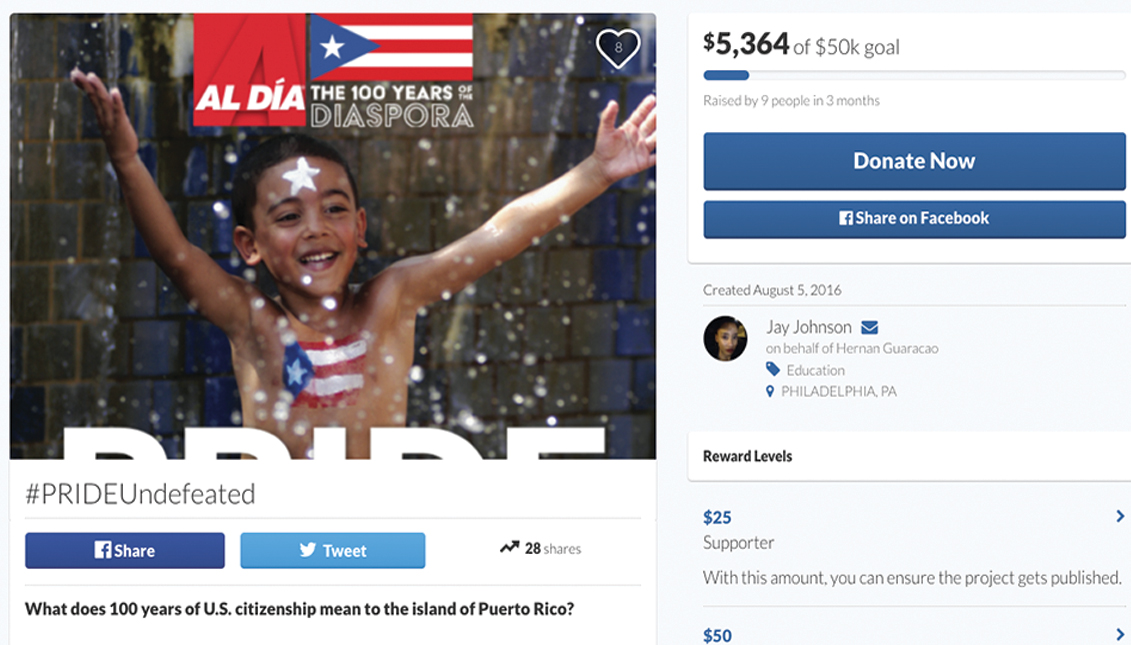 The #PRIDEUndefeated project has raised $5,364 of their $50,000 goal via GoFundMe and Crowdrise.

AL DÍA News honors the history and impact of Puerto Ricans in Philadelphia.

In July of this year, when AL DIA News first launched the #PRIDEUndefeated project, the goal of raising $50,000 seemed daunting to staff and participants. The program’s goal of telling the untold story of Puerto Rico was a task as difficult as the goal of raising the funds necessary to continue the reporting and publish the book. But due to our belief in the proposal and the value of the work, we have spent the past 5 months attempting to overcome this obstacle and get the project completed.

As the first crowdfunded and crowdsourced plan in the Philadelphia area, the project aimed to tell the inspiring and relentless story of Puerto Rico’s relationship with the United States, specifically in response to power and pride we see from Puerto Ricans throughout the diaspora and specifically within the Philadelphia region. This history is important and even with this noble task, it has been difficult to get off the ground.

The task of raising money within any community is hard.

Facing difficulties from gauging interest to encouraging involvement throughout the project’s duration, the staff at AL DIA News has been committed to raising the money by any means necessary. From sending 50 letters to prominent members of the Puerto Rican community to calling the letter recipients everyday for the month after, our dedication to outreach for the cause we believe in has not wavered despite the lack of positive feedback we received.

Though we raised $5,364 within those three months, the process of raising the money has not picked up but been a slow and steady process with donations of $25 to $15 trickling in throughout the weeks. We’ve diversified our tactics to get information about the project known throughout the community. From promoting the content at events throughout the city to engaging our communities via social media contests and promotions, we have tried to get in contact with the audience for this venture and enlist support directly.

Your backing for this project can help us make this contribution to the history of Puerto Rico and highlight the accomplishments of prominent Puerto Ricans throughout Philadelphia and surrounding areas. We know that the story of Puerto Rico is one of dedication to community, advancement, and perseverance and we want to showcase that feeling and that sense of pride through the the journalistic work of telling the story of today’s Puerto Ricans and how it relates to the past of the island. You can show your belief in philanthropy and in the #PRIDEUndefeated project by donating here. Or contacting us directly at 215-789-6970.