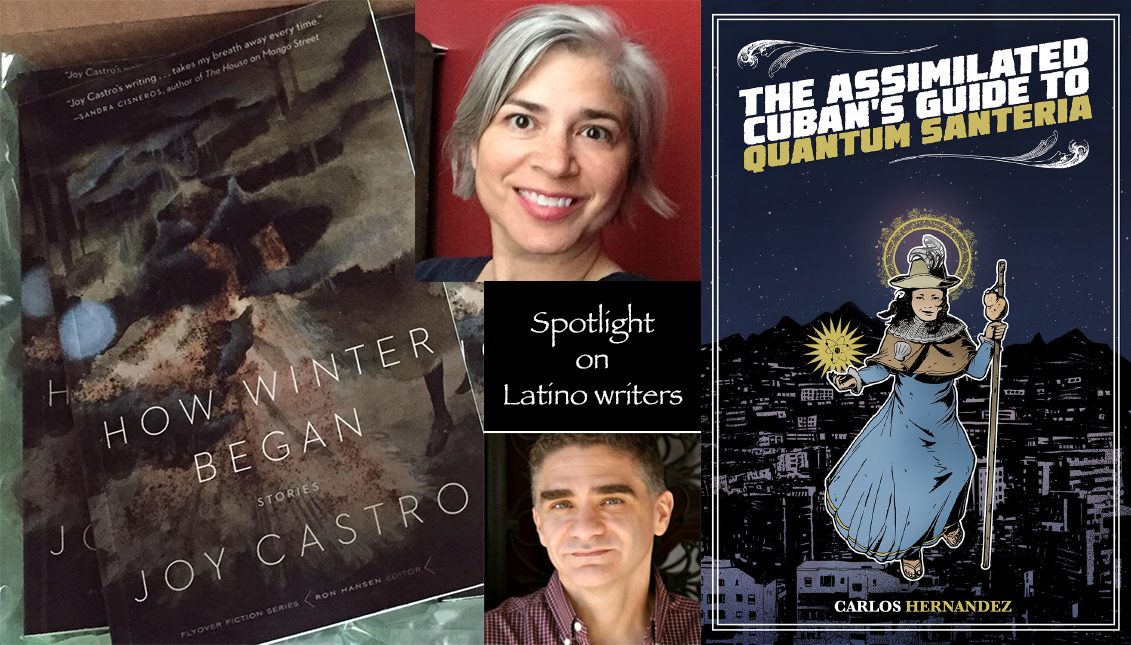 Two new collections of short stories give evidence of the breadth and richness of U.S. Latino writing. The Assimilated Guide to Quantum Santería by Carlos…

Two new collections of short stories give evidence of the breadth and richness of U.S. Latino writing. The Assimilated Guide to Quantum Santería by Carlos Hernandez is fiercely smart and entertaining, a polished collection of stories by one of speculative fiction's most distinctive and original voices; while Joy Castro, whose How Winter Began was released Oct. 1, has been characterized by Publishers Weekly as "uncompromising in her anger, intelligence, empathy."

Joy Castro is best known for her thrillers, Hell or High Water, and, Nearer Home, set in post-Katrina New Orleans. How Winter Began is not a thriller but a set of short stories all featuring Latina protagonists. That is rare enough in the spectrum of contemporary literary writing, but it is the quality of Castro's prose and the depth of her characters which is winning her praise. None other than Sandra Cisneros (The House on Mango Street, Caramelo) has characterized Castro's writing as "like watching an Acapulco cliff diver. It takes my breath away every time." Others have described it as "tough and elegant," and her characters as "vulnerable but stunning in their fierce determination."

The stories themselves explore violence, poverty and white-dominant culture through the eyes of women like Irene, who does what she thinks she must to provide for her baby daughter, or Josefa who is raped and after avenging herself faces the consequence of becoming a woman with agency.

Castro herself was born in Miami, raised in England and West Virginia, and educated in Texas — which makes her fiction resonate across regions and cultures. She has been published in a lot of different venues, including Salon and the New York Times Magazine, and her fiction has won a  Nebraska Book Award, an International Latino Book Award as well as earned her a spot as a finalist for the PEN Center USA Literary Award. Despite the accolades, she remains one of the most accessible and self-effacing writers, interacting warmly and personally with her readers on twitter.

I am one of those readers, and though Castro has written across genres before (she has seen memoirs and books of essays published in addition to the thrillers), I am most excited by this collection of stories because her literary voice is so distinct from (but every bit as strong as) her memoirist and genre voices.

How Winter Began is available now from Flyover Fiction at Amazon.com.

You have to wait a bit longer to read Carlos Hernandez's collection of stories — it will be released by Rosarium Publishing in January of 2016 — but it is well worth the wait.

I was fortunate enough to hear Hernandez read one of his short stories even before I had a chance to read his work, and if you are ever presented with the opportunity to go hear him, don't think twice just go. He is a great reader — dynamic and funny and compelling — and it turns out his stories on the page are the same. As with Castro, it is genuinely wonderful to read a short fiction collection with this many (and varied) Latino characters, especially because science fantasy is usually lacking them. In any case, Hernandez's version is transfixing, full of  technological paradoxes and inhuman intelligences that are compellingly human. And the urban (and suburban) fantasy pieces sprinkled into the collection are like the best dark añejo rum: warm, smoky, exquisitely sharp and sweet.

There is, in fact, something quite addictive in Hernandez's writerly voice — a combination of compassionate intelligence and weird humor that contributes to making even his most morally ambiguous and dubious characters likeable. Many of the stories hinge on family — only this is an exploded definition of it. In the story that opens the collection, for example, the father and son relationship depicted becomes something quite different in the end, something far richer and, despite its inhuman aspects, more intrinsically human than when it started. The final story in the collection (which lends the book its title) is another fascinating look at family, and tradition, and what is said and unsaid. And ... you'll never look at a pigeon the same way after reading it.

Hernandez, who lives in Queens, is the author of more than 30 works of fiction, poetry, prose and drama. He is an Associate Professor at the City University of New York, where he teaches English courses at BMCC and is a member of the doctoral faculty at The CUNY Graduate Center, and is also a game designer, currently serving as lead writer on Meriwether, a CRPG about the Lewis and Clark Expedition (which I am also looking forward to).

Preorder The Assimilated Cuban's Guide to Quantum Santería on Amazon.com.