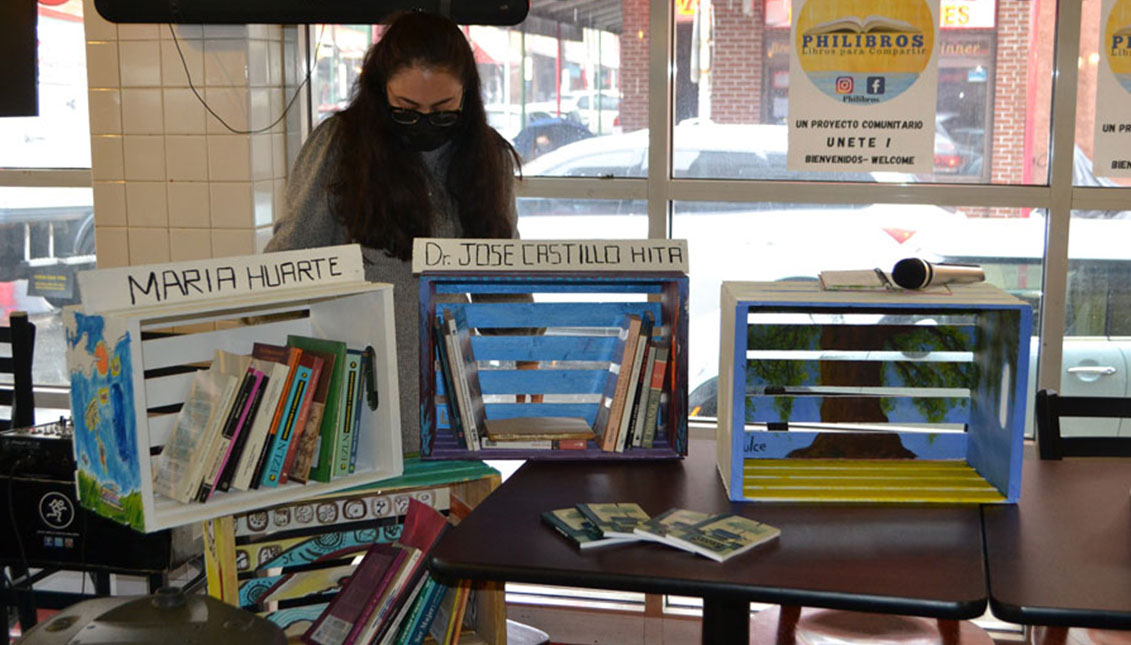 Each box of books located in a local business bears the name of the donor or an eminent Philadelphia Latinx. Photo: Facebook-Philibros

Philibros, solidarity and love for Spanish-language literature in South Philadelphia

In this community bookstore with a library soul, books come and go, but the reading is continuous.

Nowadays, when bookstores that offer a wide variety of books in Spanish on their shelves can be counted on the fingers of one hand, those who want to read in their language have very few options except for Amazon.

That's why a group of South Philadelphians united by their love of books and Spanish have joined forces to create a bookstore with a difference, where reading comes first and is passed from hand to hand.

Now the city's migrant community, mostly Mexican, has a space in Philibros where they can access books in Spanish when visiting local businesses.

"It is a community project and we decided to call it Philibros, firstly because we are in Philadelphia and because 'philis' is love, love for books (in Greek philos means love)," Edgar Ramírez, who proposed the project, which consists of taking boxes of books to shops for the public to take home and read, told EFE.

The idea was born more than a year ago and as soon as it was presented, people turned to donating their books, which were initially placed in a taco restaurant, but the number of places is growing all the time.

Petite Féte Philadelphia gives back to the community
November 20th, 2022
A Journey to the Origins of the Book
October 19th, 2022
Importance of literacy for underrepresented communities
October 5th, 2022

The books are placed in fruit boxes previously painted and decorated by artists and families, and in each box you can read the name of the person who donated them or the name of a relevant Philadelphia Latinx. Like María Huarte, the first Mexican who moved to the city two centuries ago, or the Mexican doctor José Castillo, who served the community until his death in 2009.

"In two months we will have twenty boxes. The idea is that the person takes a book, reads it and returns it" for use by other residents, says Ramírez, who despite having only a primary school education learned to value reading as a gateway to many worlds.

"We're going to suggest that it's an exchange, that you take one and donate another. There will be no records or monitoring. In each book there will be information on how this process works", the Mexican explained.

But the Philibros project does not end here, as the idea is to grow to include book clubs for all ages, as its primary objective is to promote reading in Spanish.

So far they already have a publishing house that has donated books to the initiative. Who's up for it?