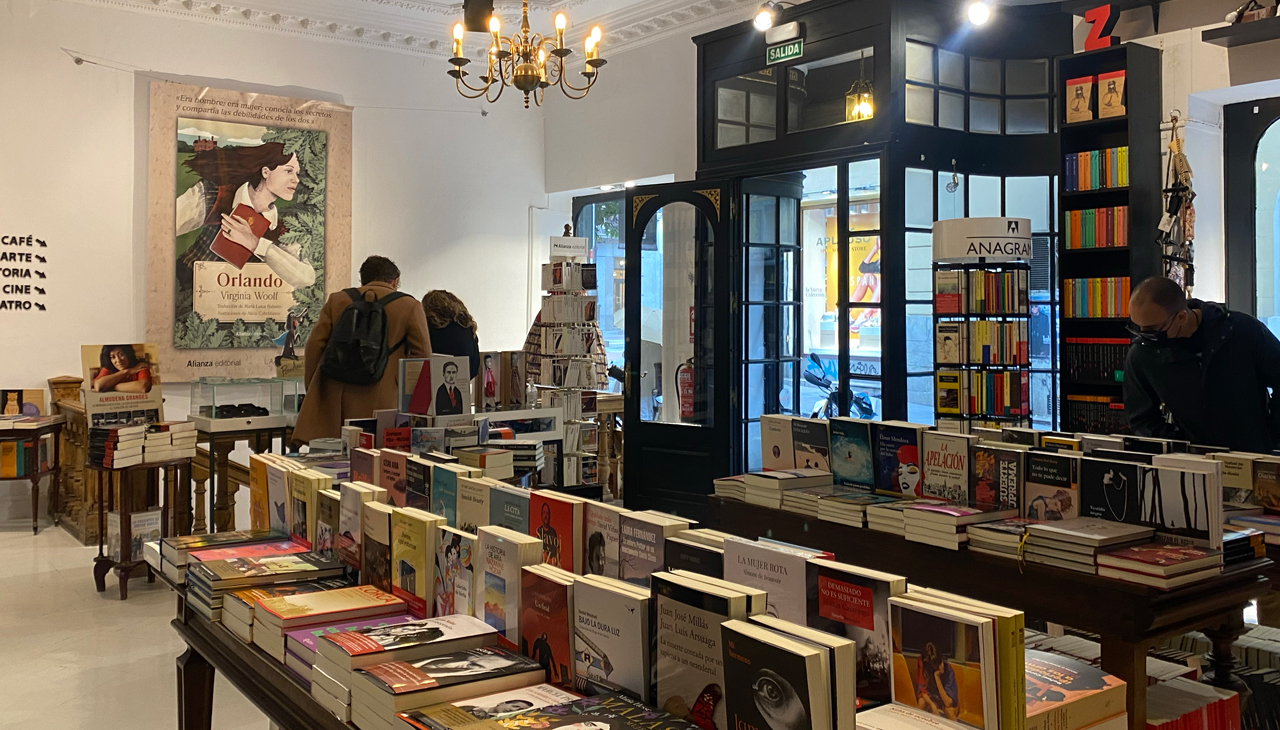 “La Mistral”, a bookstore not to be missed if you visit Madrid. Photo: Sandra Ramírez Ortega - AL DÍA.

“La Mistral”, a bookstore not to be missed if you visit Madrid

This place, founded by three Argentinian friends has, in little time become the go-to space to find novels, essays, and poem anthologies in Spanish in Madrid.

It was born in the Cosmopolitan city of Buenos Aires on a warm November night of 2020. “What a moment to come into this world!,” is what anyone would say remembering how surreal everything we have been since then.

Yes, the same year marked by the sanitary crisis, confinement, social distancing and face masks, was the year that Andrea Stefanoni, Carla D’Elia and Julian de Dios chose to “give birth” to La Mistral: a bookstore “conceived” in Argentina, which today raises proudly above calle Travesía del Arenal número 2, some 820 feet from Puerta del Sol (Gate of the Sun) in Madrid. The famous name, which pays tribute to the first Latin American woman to win the Nobel Literature Prize, Chilean Gabriela Mistral, did not deserve less.

“We were in the middle of the pandemic, and it was more a crazy idea resulting from months of lockdown than a project. But that same day, we started imagining spaces, drawing plans, coming up with names and by the end of that night, we knew what we wanted: a warm bookstore, specialized in narrative, with lots of poetry, art books, small tables to enjoy good coffee, and if possible a small stage for presentations; in a few words “a place to meet that you wouldn’t want to leave,” reads the testimony that La Mistral owners posted on its web page.

After designing the project, the three friends were convinced that there was no time to waste; and in February of 2021, Andrea Stefanoni bought a one-way ticket, packed her luggage and flew to the European capital with her dog Aurora.

Spain is not alien to Stefanoni, it is actually close to her roots, and if it seemed that the shadow of uncertainty was about to peek its head —so typical of the current times—, it soon faded away in a city that has embraced her so lovingly, making her feel at home. “My grandparents ran away from the post-war, with nothing, only a 6-year old daughter and no money, spending 22 days on a boat trip. I came over to a cleared land, they risked their lives. In my case, it would have been, at most, a failure, like many others you can go through in life. Everything that I found was positive, from people’s kindness to its sunsets on amazing skies,” explains Stefanoni in an interview with AL DÍA News.

Today, a year later after landing in Spain and seven months after the opening of the place she manages, it is still hard for her to assimilate her success. Besides the acceptance by the public, they have received a nomination for Bookstore of the Year in the The London Book Fair International Excellence Awards, one of the most important awards in the publishing world. La Mistral is competing in this category against Norli Universitetsgata from Norway and Rahva Ramat Viru Store from Estonia.

“Awards are always very important, especially when they are as prestigious as the London Fair awards. We are very happy with the nomination, and I also think that it is important they chose a Spanish bookstore,” says the young Argentinian, whose professional career has developed inside a true shrine for books: the Ateneo Grand Splendid of Buenos Aires. “It is the biggest library in Latin America, and one of the nicest in the world. It gave me everything, and it will always be an important part of my professional and personal life. I started very young, at 23 years old, so almost everything important that happened to me, happened while I was working there. At Ateneo, I learned the good and the bad of this occupation, and now I’m putting it to practice, just in a smaller place and in another city,” she points out.

This valuable experience in Ateneo, the carefully-picked book selection with Spanish-only titles, the magical shop window facing the Street, and the historic enclave where it is located inside a theater hallway make La Mistral a must-see place during a stay in Madrid.

What is celebrated on the night of San Juan?
June 23rd, 2022
Diego Luna set to perform in Madrid
June 17th, 2022
The Spanish odyssey to bring the smallpox vaccine to the colonies of Asia and Latin America
June 15th, 2022

Once inside, there is not a person who is not mesmerized with the ancient architecture, the minimalist decor, the wooden staircase, the boiserie walls, the stage and the hidden door connecting the bookstore and the theater. In the first floor, there is a cafeteria where the visitors can delight themselves with coffee and typical treats from Argentina and the Southern Cone of Latin America — like “alfajores” and “dulce de leche” (milk jam) cones —, all of these while you are being guided by an expert eager to suggest titles going from novels and essays to poem anthologies. “A book I always recommend is “Las Primas” (The Cousins) by Aurora Venturini. Sometimes, I even give it away,” comments Stefanoni as her loyal and inseparable stares at her mate Aurora, who is also named after “Las Primas” author.

Even if she has made Madrid her home, and her avid readers and curious tourists make her feel sheltered, Stefanoni confesses that her homeland constantly caresses her memory. “I always say that I don’t feel any longing, but it’s not true. I do miss my homeland. I miss going for a ride in the car listening to music any given rainy night in San Telmo with my friend Juan Martin. I miss some dishes, the neighborhood, and the coffee I had every morning in the same place. But I also miss some people that are gone.”

For a moment, she lets nostalgia go, she prepares herself coffee for a reader, assists another client, and another. Stefanoni looks free and happy in her world. It will probably be by the end of the day, when the lights are off, and silence is the breathing air at La Mistral, when she will remember that in the coming weeks she will know the results of the London Fair awards.

Until then, we say good-bye, and like any other good book advisor she recommends that in the same way we have visited her store, we should soon go check La Central on calle Mallorca in Ciudad Condal. “I have beautiful memories over there,” she finally says.