Alejandro Giammattei will be in charge of leading Guatemala, amid concerns about the safe third country agreement with the United States and the burdens of violence and corruption.

Who's Who: Alejandro Giammattei,...

Today, Tuesday January 14 at 2pm, Alejandro Giammattei will be sworn in as the new president of the Republic of Guatemala, after more than fifteen years of attempts to become head of state, comprising four presidential campaigns (2007, 2011, 2015 and 2019).

Born in Guatemala City on March 9, 1956, he also holds Italian nationality by inheritance. He studied medicine, volunteered for the fire department and was a consultant for the Pan American Health Organization during the first half of the 1980s.

In 2006 he was appointed director of the Guatemalan prison system. During his term as director of the institution, he carried out the Pavo Real Operation (September 25, 2006), which consisted of the retaking of the Pavón Penal Rehabilitation Farm in Guatemala City, as the authorities had lost control over it and the prisoners had formed an independent micro-republic, with its own governing bodies and licenses that ranged from a house with a jacuzzi to bacchanals flooded with alcohol.  Seven prisoners died during the operation, for which Gimmattei was prosecuted in 2010 by the Public Prosecutor's Office and the International Commission against Impunity in Guatemala (CICIG).

During this time, Giammattei paid for 10 months of pre-trial detention, after which he was released for lack of evidence. However, Erwin Sperisen, who was then the head of the Guatemalan National Police, was sentenced to 15 years in prison (down from a previously imposed life sentence) by a Swiss court, on charges of complicity in such murders. 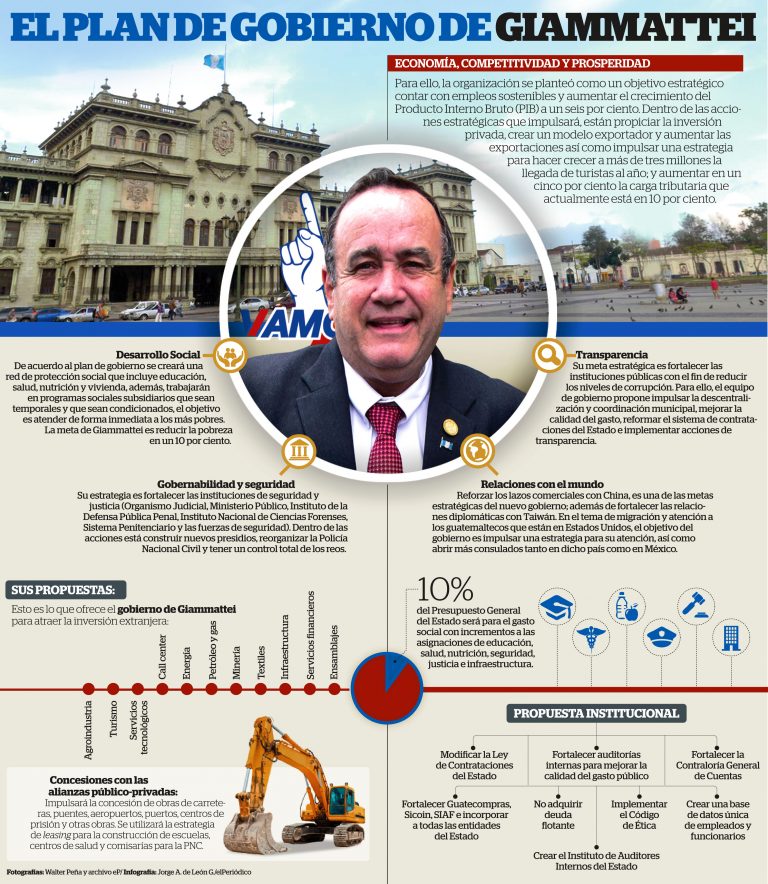 Still, Giammattei retains an image of fighting corruption, which was one of his banners during the last election. On August 11, 2019, he won the presidency of Guatemala with 58.4% of the vote and an abstention rate of over 50%.

With some very emphatic campaign proposals and intentions of encouraging foreign investment, transparency and strengthening Guatemala's international relations, Giammattei showed himself as a candidate with a strong interest in reactivating the Guatemalan economy in order to alleviate the strong social problems of poverty and violence that afflict the country.

Another of his campaign promises was to fight "with testosterone" against insecurity, drug trafficking, organized crime and gangs, as well as to promote a law that treats the latter as terrorists. In interviews, he also showed his willingness to apply the death penalty to those criminals whose cases conform to the constitution.

Giammattei, who is also against abortion and equal marriage, comes to power with a barrage of accusations against people close to him. They include accusations of conflicts of interest with his Minister of Energy and accusations of intimidation of the Guatemalan investigative media, Nómada.

However, its most pressing challenge will be to deal with the agreement signed between the government of former president Jimmy Morales and the government of President Donald J. Trump, which establishes cooperation between Guatemala and the United States for the examination of requests for protection. In practice, this agreement would seek to establish Guatemala as a safe third country for asylum claims.

Despite calls from the press and international community, the safe third country agreement would mean that immigrants passing through Central America on their way to the United States would have to seek asylum in Guatemala before being able to do so in the United States.

The agreement signed is in tension with both the 1951 Convention on the Status of Refugees that supports them and the decisions made by the Guatemalan Constitutional Court.

Article 1 of the Convention states that:

Article 145 of the Guatemalan Constitution states that "Guatemalans by birth are also considered to be nationals of the republics that constituted the Central American Federation if they acquire domicile in Guatemala and express their desire to be Guatemalans before a competent authority. In this case they may retain their nationality of origin, without prejudice to the provisions of Central American treaties or agreements".

The countries that belonged to the Central American Federation in the 19th century are those that now make up Guatemala, El Salvador, Honduras, Nicaragua and Costa Rica.

This would imply that the Republic of Guatemala would be obliged to protect Salvadoran, Honduran, Nicaraguan and Costa Rican nationals who wanted to live in that country. This, in short, is very convenient for the implementation of Trump's policies.

However, the agreement signed by the Interior Secretary of National Security, Kevin K. McAleenan, and the Minister of the Interior, Enrique A. Degenhart Asturias, would not be in accordance with Guatemalan law, since in September 2019 the Constitutional Court decided that this agreement should be submitted to a vote in the Guatemalan Congress, which has not happened to date.

Already, during the presidential campaign, Giammattei announced that he would oppose this agreement, despite Trump's threats to impose sanctions on the country if it refused to become a safe third country.

How will he deal with this first challenge? Only time will tell.

To get AL DÍA Print Edition at the comfort of your home, please click here
TAGS
guatemala
presidente
Alejandro Gimmattei