The Trump campaign on Latinos: between socialism and omission

The campaign for President Trump's re-election has focused on the Latino community in a very particular way, making use of the Venezuela case against Democrats and avoiding immigration.

The Trump campaign on Latinos: between...

Social networks like Facebook have seen thousands of ads proliferate in favor of the re-election of U.S. President Donald Trump under the slogan 'Vamos to Victory' – a weirdly redacted Spanish ad that winks to iconic campaigns in the history of Latin American politics.

"Until victory always," the late Hugo Chávez Frías used to say, echoing the phrase of Commander Che Guevara. "We will win," said the campaign song of Chilean President Salvador Allende, written by Claudio Iturria and that became a symbol of the resistance to the dictatorship of Augusto Pinochet.

Paradoxically, the Trump campaign ads focused on the Latino community warn of the risks of "socialism" as we know it in Latin America.

According to Reuters, the campaign has launched around 3,000 ads on Facebook, asking in English the support of Latino voters to “curb illegal immigration in the past six months, often asking people to sign online petitions to ‘deport illegals’.” 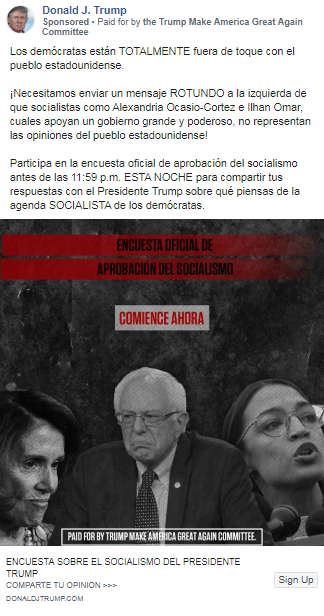 However, campaigns launched in Spanish have another target: to warn Latinos of the risk of “Venezuelan-style” socialism, taking advantage of the support that the president has among the community of exiles from Venezuela in the country.

Some of the ads refer to young members of the House of Representatives such as Alexandria Ocasio-Cortez or Ilhan Omar, who have described themselves as social-democrats, and compare them with political processes such as the one that sank Venezuela into its deep economic crisis.

But these campaigns "in Spanish" say nothing about the Administration's anti-immigrant policies that don’t distinguish between Mexicans, Hondurans, and Venezuelans.

By June of this year, the Venezuelan community was already one of the largest sources of asylum applications in the United States, according to the Los Angeles Times, and its procedures face the same obstacles as any other immigrant from Latin America.

An example of this was the experience of Venezuelan comedian José Rafael Guzmán, who was arrested during his U.S. tour at an immigration checkpoint and was placed under ICE custody for two months in Hudspeth, Texas.

As he told Cinco8, and to his followers on social media, Guzman toured the country collecting information and material for his YouTube channel, Comida, Calle y Comedia, which is part of his web series that began following the passage of Venezuelan refugees on the border with Colombia months ago.

The comedian was faced with the option of paying a 10% bond (about $ 300) and being deported to Venezuela or appealing his case.

The option of returning to the country put his life in danger, as he is wanted by the Venezuelan authorities for "incitement to hatred;” so Guzmán followed his lawyer's recommendation and remained detained for two months.

Without speaking a word of English, and surrounded by all kinds of people, the Venezuelan described his experience of how immigration detainees live in the United States.

“For blacks I was white; for whites I was Latino; for Latinos I was Venezuelan and I was the only one,” he recalled. "We had one hour of sunshine a week, and even with that, some prisoners no longer wanted to see outside and covered the windows of the cells with toilet paper."

What Guzman experienced is far from what thousands of Latin American immigrants live in the hands of Immigration and Customs. However, the comedian was fortunate enough to have a team of people who moved heaven and earth to get the judge to dismiss the charges and grant him freedom on October 18.

Guzman was taken to another detention center where ICE agents scoffed at him, and finally released him "in the middle of nowhere."

Whatever the message, the Trump administration does not distinguish between nationalities in practice. While you're Latino, all that matters is your vote.

To get AL DÍA Print Edition at the comfort of your home, please click here
TAGS
socialism
Trump
Latino Vote