The heart of Independence Blue Cross has a Latin beat

Juan López, the Vice President of Investments and Treasury at Independence Blue Cross, is a key element in the corporate gearing of the Philadelphian insurer. His role is to manage the company's strategies of investments.

The heart of Independence Blue Cross has a...

When I was told that I was going to interview the Vice President of Investments and Treasury at Independence Health Group, the first thing my prejudiced reporter's mind imagined was a blue-blooded white man in a suit, used to counting bills and seeing the world above his shoulders. "Who could care about that?" I asked myself.

I was afraid I would not find a genuine story behind the executive label. I feared to find a story that could not be told beyond the diplomas and certificates that businessmen often hang on the walls of their offices. I feared that I should write - after all - a story that would prevent me from connecting it with the day-to-day lives of the rest of humanity; in this case, with the Latino community of Philadelphia.

But, as often happens when you have excessive prejudices and lack of context, I was wrong. Not all men in suits are hateful per se - especially if who wears the suit is Hispanic, with Caribbean blood and a loud laugh capable of breaking glaciers and making even the most timid of mortals laugh along.

This is Juan López, a man who wears a suit just as a construction worker wears a helmet and overalls; a public accountant and a storyteller. His story is that of a professional who has to do more with the Hispanic community than with the corporate class of Philadelphia.

Juan is a third generation of a Puerto Rican family that settled in New Jersey in the middle of last century. He is the son of a postman and a secretary who, despite being retired, do not remain still. His grandfather worked at the Campbell soup factory in Camden and was a job promoter. In short, he is a descendant of Latino workers, the first of his family to go to college, the first to graduate and to hold a position in one of the most relevant companies in the city.

Juan López is one of four Latinos to be recognized by AL DÍA on October 11th in the framework of the celebration of Hispanic Heritage Month.

Juan's professional path is that of a winner. With the humility of those who, while having an office in one of the highest skyscrapers in the city, don’t forget where they come from, he summarizes a successful career.

This public accountant graduated from the University of La Salle is the Vice President of Investments and Treasury of the insurer Independence Blue Cross; a position that makes him responsible for a team of 80 people, leading investment strategies, as well as managing the capital that comes in and out of the company.

In other words, Juan is a key player in the financial management of a business in Philadelphia that is now one of the top competitors in the nation's health insurance market, with 8.5 million affiliates and presence in 24 states.

Juan came to the IBX in 2010, after working 13 years for Cigna Corporation, where he led a diversity promotion and professional training program in the Finance department. Prior to Cigna, he held various positions at Aramark, GE Capital and CoreStates Bank (now Wells Fargo).

An accountant since he was very little

Since he was a kid, he got used to breaking molds and conquering spaces that were "foreign to him." First, like the brown and surnamed Latino child who grew up in a white neighborhood, then as a teenage worker. He represented what in Colombia we use to call a "todero": someone who does not wander, who attends "the school of life" in order to learn how much he can to improve his economic situation.

At the age of 12, he moved from being a gardener to a local newspaper delivery man in Maple Shade, NJ. Later on, he worked as a janitor in a school. When asked what the experience left him, he answered with laughter: "I learned that I didn’t want to do manual labor, because is very hard."

Then he adopts a more thoughtful tone and remembers his father's words to complete his answer: "The world is not a fair place, but if you work hard, you will learn lessons and that is what you will take with you." Meaning that everything he has done in life has served him well.

One of those lessons was the certainty that it’s not enough to work hard to move forward. It also has to do with intelligence. His uncle, Jose de Jesus, was a fundamental figure. He was a public accountant who ran his own business. Juan always admired the independence of his uncle. At the age of 17 he was convinced  about what he wanted to be: an accountant.

With that idea in mind, he entered the university. He studied and got the best grades. But that was not enough when attending his first interview. "I still remember it as if it were yesterday. I thought I had convinced them, but a small note at the end of the review said that it was not compatible with the culture of the company. Why? Because I was wearing diamonds socks”.

A dialogue between cultures

As his father said, "the world is not a fair place" and there are things that you cannot learn in school. Juan learned that "working hard is not enough, it is also necessary to make relationships". That first failed interview marked him for good. He questioned whether being different would be an impediment to join a world still reserved for privileged social classes. 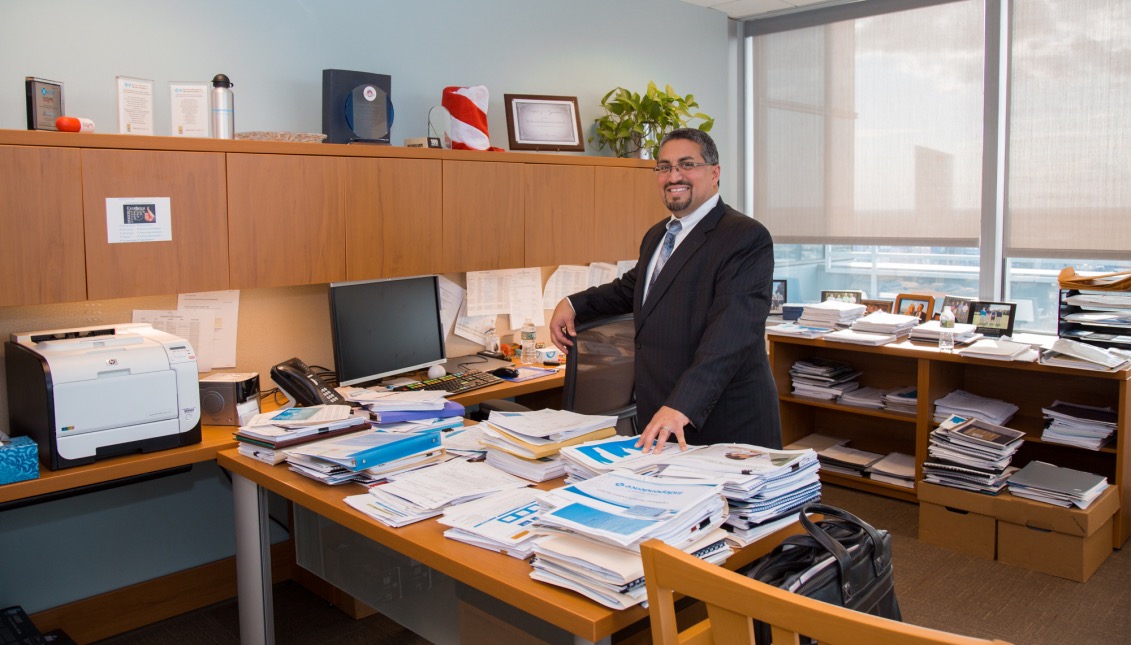 Between the lines, he says that the dialogue between two cultures is not always easy: the Latino spontaneous rummage and the American professional networking. "One of the things that affects us most as a culture is that tendency to remain locked in our own group, to stay in a comfortable zone that is familiar to us. Sometimes that prevents us from dreaming about different things," he says.

To fit and adapt was not easy. Juan got his first position at CoreState Bank, where he was part of a group that created awareness of the value of having diverse teams within the companies. They held a sort of workshop that discussed strategies to increase the inclusion of minorities in managerial positions. He was never worried about the diamonds on his socks again.

When he arrived at Independence Blue Cross, as he remembers, he found on the very first day a company that opened its doors to diversity. Alan Krigstein, former chief financial officer and one of the architects of the company's commercial success, was in charge of welcoming him.

"I ran into him in the garage, I did not know who he was, and he said, ‘you're Juan López, right? We have an interview in half an hour’. He took me upstairs and offered me something to drink." Juan was impressed that an executive at that level knew his name and led him into the waiting room.

In addition to accounting, Juan is passionate about community work in North Philly. He is in charge of IBX's participation in United Way's social campaign. He is a board member of Providence Center. He is also part of the Latinos with Purpose initiative and led a campaign to provide a library to Shepard High School.

He says all these initiatives supported by Independence Blue Cross have allowed him to reconnect with his people. Something of what he feels proud and grateful, because for him it’s a way to give back to a community with which he feels identified.

"There is nothing better than working in a company that supports all the things you like to do."