Sergio Flores, founder of Talk 4 Less, has seen a single venture lead to opening more than 200 Cricket Wireless stores across the U.S.

The path to financial freedom is far from linear — and it’s different for every individual.

In the case of Sergio Flores, it began without a college education, and only the hard work ethic he developed at a young age.

Becoming a father at the age of 19 put a pause on his original plans of likely enrolling in the military after high school, so he immediately entered the job force.

“I had to go out there and make a living for my baby and all my plans were kind of put on hold temporarily,” Flores said in an interview with AL DÍA.

He originally started working at the age of 12, helping his father on the weekends sell watermelons and cantaloupes.

Right out of high school, he started working at Greyhound for about six months, before moving on to work at a car dealership for a couple years.

It was his next job at T-Mobile that sparked his current passion for cell phone service, and set the stage for the position he is in today as an authorized retailer.

“I started working for a gentleman who gave me the opportunity to work with him,” Flores reflected, noting that he worked seven days a week for over a-year-and-a-half.

He started out with door-knocking duties on weekdays, and working at the flea market on weekends. He did it with the hope to eventually make enough money to buy his own store.

When Flores got his initial opportunity to purchase one, he spent all his savings on it and then it failed.

“So I was back to square one,” he said. “I had to shut it down and I had to go back to do the same thing for another year.”

The second time around, Flores managed to successfully open his own location, before opening a second one about a year-and-a-half later.

“And then I just started growing the T-Mobile brand,” said Flores.

He eventually managed to open 10 stores before Cricket came to El Paso, providing yet another opportunity for him.

Flores ran his T-Mobile and Cricket stores simultaneously, before eventually switching all his business over to Cricket, officially launching his business, Talk4Less Wireless in 2006.

“I went from having two stores to 12 with Cricket… and just started growing the Cricket brand here locally,” said Flores. “Fast forward another few years and at one point I had 22 Cricket stores here in El Paso.”

“I was finally the largest dealer in El Paso, which was kind of my goal,” he added.

In a city in which about 82% of the population is Latino, Flores’ initial foray into entrepreneurship was guided by his desire to target and make a positive impact on the Latino community.

Given his background as a first-generation Mexican-American, he understands the experiences and needs of many others in the community.

“We’ve been in that position where the income is not there and we need to go out there and find the best value for your buck, so I can relate to the situations that a lot of our customers are in, as we were in that same scenario,” said Flores. 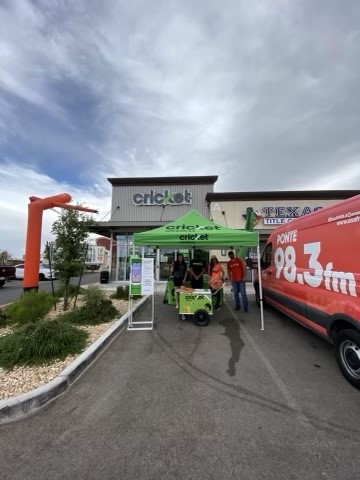 He’s been able to connect with the Latino community in that way, purposefully positioning his stores in those locations.

“I understand what type of employees I need to have in those locations that are going to be servicing these customers,” he added.

After growing the Cricket brand in his hometown, Flores started to expand his business to Albuquerque and parts of Colorado, providing avenues to explore other markets and different communities.

Like most businesses, Talk4Less felt the brutal effects of the COVID-19 pandemic, as some locations had to close temporarily, and others permanently.

More than 17 months later, the effects are still being felt; some locations have reopened, and many positions are still not being filled.

However, Flores said, “we figure it out.”

Flores remains optimistic that things will improve in the coming months.

When asked what he credits his overall success to, Flores said it’s his drive, along with his family and the team around him.

“I still have it in me to be able to just do better,” he said.

“Having people that have the same vision, to do hard work … the type of mentality is that we roll up our sleeves and get it done,” Flores added.

Being an authorized retailer has been a great experience for Flores.

“I’m extremely fortunate to be able to represent the Cricket brand,” he said. “They gave me the opportunity to grow… I really put a name out there for myself.”

“It’s had a huge positive impact in my life and my family’s,” he added.

His goal for the next year: more growth.

He also currently has five AT&T stores in El Paso, in which he hopes to also grow its brand in the same way he did previously with T-Mobile and Cricket.

For more information on how to become an authorized retailer, click here.

To get AL DÍA Print Edition at the comfort of your home, please click here
TAGS
Latino entrepreneur