A Mexican artist transforms his illness into unusual artistic performances

For LechedeVirgen, insects are a symbol of life itself. Photo: Herani Enríquez Amaya

What is it like to live while we die? Is art a form of resistance to disease? Felipe spent ten years at the gates of death and this was the way he chose to face it.

A Mexican artist transforms his illness into...

His stage name is longer than the life expectancy they gave him: Felipe LechedeVirgen Trimegisto. He was born in Querétaro, Mexico, 27 years ago.  LechedeVirgen was one of ten siblings, and faced a Chronic Renal Insufficiency, a degenerative and incurable disease in which the kidney function gradually decreases. He turned that experience into the subject of his work: to resist, to understand one’s own fragility and the finitude of things.

"It was a way of accepting that I could die but also understand what it is to be alive," he said to The Objective. “I began to approach my sick body when I was in what clinical science calls ‘terminal stage,’ and so I was able to confront the worst pains, the worst anguish, and despair.”

For LechedeVirgen, art is one of the best tools to communicate with the disease. His body is a battlefield and a space for reflection, where physiological, surgical, pharmacological and emotional changes occur.

“My raw material is my own life; art heals in a very different way than medicine. It helps you to see what happens in front of your eyes all the time and to be aware of the paradoxes – It’s not the same to be alive than to be living, nor to be dying than to be dead.”

In a wonderful text, "The Removed Earth," the performer, for whom insects are a symbol of life itself - "700 dead flies equals a human life," he says - made this reflection around disease as travel and lighting:

"We need hunger to remember that we are a stomach." 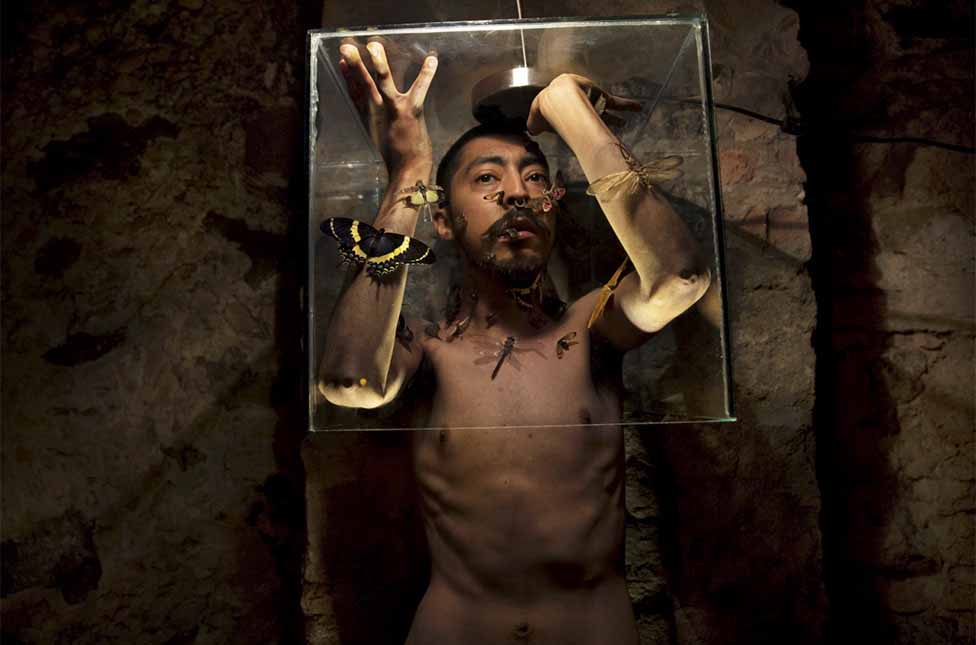 The sick are not to blame

What exactly is a sick body? Who narrates our bodies and who diagnoses and legislates them?

These are some of the questions asked by artists and activists in search of a new way of understanding sickness and the role that society and medical institutions play in stigmatizing some types of disease, such as, for example, serophobia - phobia of HIV patients - or mental conditions such as bipolarity or borderline personality disorder.

One of Felipe's performances, 'The Fields of Pain,' is inspired by the life of José Jesús Constantino Síntora, who was known in Mexico as “El Niño Fidencio,” a healer from the north of the country famous for his ability to cure any disease with unconventional methods, such as getting patients on a swing or opening them without anesthesia with broken glass, or scaring them with a cougar running behind them.

“I dreamed about El Niño a few years ago, I saw him removing a luminous tissue similar to that of a neuron inside my head. Since then I let the child in my life and in my work,” says the artist, who in March 2017 received a transplant that saved his life.

His mother was the donor.

“I think that artists are here to remind the world that we’re dying and, therefore, we are alive,” concludes Felipe.

To get AL DÍA Print Edition at the comfort of your home, please click here
TAGS
Art
illness
mexico

The Louds, the story of a family destroyed by a reality show

Biracial women confront Belgium with its dark colonial past

Why does Mexico continue to bet on oil when other countries have started investing in renewable alternatives?

Is the Mayan Train worth the environmental cost?

The largest and oldest Mayan monument in the world is discovered